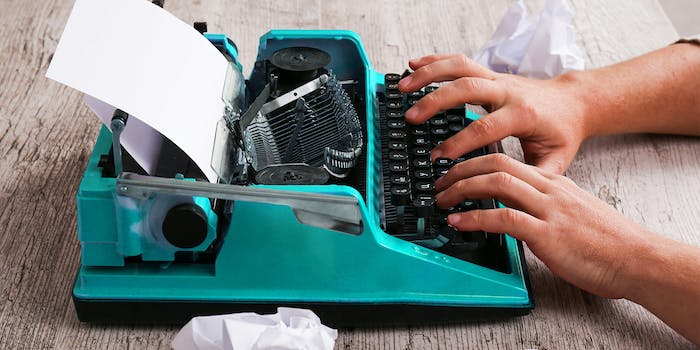 Assange is tweeting double the nonsense.

There are many signs that Twitter hates its users. People ask for simple updates, like the ability to edit tweets or control the rampant harassment, and the service ignores them. Instead, we get design tweaks like circular avatars and a like button. Recently, Twitter offered concrete proof that it really wants to watch us all suffer: Julian Assange was part of the group of users selected to have the longer, 280 character limit. Twitter, in all its wisdom, the website that serves up daily horrors, gave him more space to type complete nonsense. Now Assange is taking the opportunity to write a bunch of super long and incoherent tweets.

Check out this work of art that he tweeted a few days ago:

Women, I will let you in on a male secret. Men know that constantly self-proclaiming male 'feminists' are often predatory sleaze bags. They are intensely disliked by other men because of their manipulative qualities and not, in general, because they are viewed to be sex traitors.

So much to unpack here. Is he including himself in this category of male feminists? Is he implying that male feminists are “sex traitors” because they claim to support women? What is going on in this tweet? Many other people on Twitter were also confused.

What does what he wrote even mean??

Why did Twitter give @JulianAssange 280 characters, just so he can say that men who believe in equality are evil?

Of course, this isn’t the first time that Assange has drawn negative attention on Twitter. In August, he was ridiculed after revealing that he spends his free time Googling articles about himself.. But now that he can send 280-character missives out into the world, Assange’s tweets are getting stranger. A day before tweeting about male feminists, Assange tweeted that he has “never been charged with sex anything.”

What does that even mean? You’re just digging yourself into a deeper hole, dude.

Here's a good, if personal example of the power of fake news. Although I have never been charged with sex anything, won at UN & in Sweden and my asylum relates to massive 7 year long US grand jury process against me (https://t.co/FwlA5vvD2c) we see this: https://t.co/rX4jJGqbg8

His tweet about #metoo, a hashtag used by women to share their experiences of sexual assault and harassment, was also unsurprisingly bad. The tweet seems to imply that women lie about sexual assault, and it’s hard not to read it as a bitter response about a rape allegation made against him.

"All I can say is thank god the Twittermob wasn’t around in the Old South: there would have been a hell of a lot more black men swinging from trees as tweeters said: ‘I believe the woman. He’s definitely a rapist. #metoo.’" https://t.co/RNDcDyQB6z

There's something wrong with Hillary Clinton. It is not just her constant lying. It is not just that she throws off menacing glares and seethes thwarted entitlement. Watch closely. Something much darker rides along with it. A cold creepiness rarely seen. https://t.co/JNw2dkXgdu

And to try to explain journalism:

Russian press will also be reporting it by definition.

2) Write story: Russian state secretly behind globally newsworthy event as proved by their press reporting it.

And to express his frustration that the “Trump ‘pussy’ tape” upstaged his WikiLeaks story.

Everyone is now talking about Hillary Clinton and the Uranium One bribery investigation. I first wrote about Uranium One on October 7, 2016 but NBC/Wash Post moved the Trump 'pussy' tape release forward by three days burying development of the story. https://t.co/NuRIYEQOUx pic.twitter.com/9YACqif3Vf

I am looking for a decentralized / cryptographic alternative to Twitter. Twitter's freedom of expression has been on an inexorable decline. It is enslaved to its US jurisdiction and politics. Although it is substantially better than Facebook that is a very low standard indeed.

Assange’s longer tweets are not going over well.

I have to ration every punctuation mark but Twitter gave Julian Assange 280 characters to mansplain feminism https://t.co/Pq7w0zdzcE

women: Hey! Why are these rapists and harassers still on twitter?@Twitter: But what if we gave Julian Assange 280 characters?

Julian Assange now has 280 characters to tweet with and is using every one of them, for better or for worse.

ALERT: Julian Assange has 280 characters. Block him if you want to keep your sanity!

Twitter has yet to make its 280-character count seem like a good feature. It allows people to be less succinct, which is extremely pronounced on accounts that were already churning out dumb stuff with 140 characters. Soon, we’ll see nothing but long, rambling tweets on the website. But for now, only select people are tweeting in 280 characters, and Assange is unfortunately one of them.