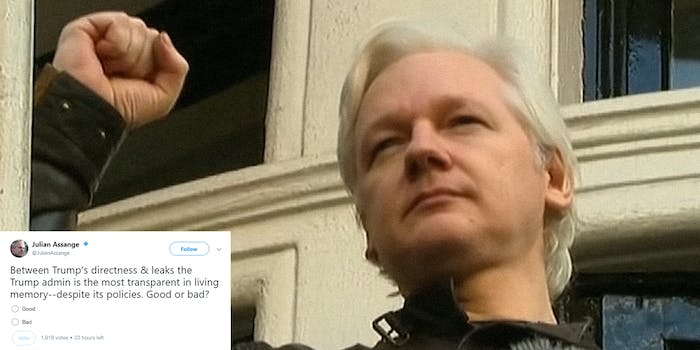 Julian Assange gets laughed off of Twitter after tone deaf poll

On Friday morning, WikiLeaks founder Julian Assange decided to conduct a Twitter poll. Many people use Twitter polls to jokingly ask for life advice, but Assange seemed serious about the question he posed.

“Between Trump’s directness & leaks the Trump admin is the most transparent in living memory—despite its policies,” he wrote. “Good or bad?”

Between Trump's directness & leaks the Trump admin is the most transparent in living memory–despite its policies. Good or bad?

The poll doesn’t close for a day, but the consensus on Twitter is clear. People think Assange’s tweet is one of the worst takes on the Trump administration.

The food was dog shit and the waiter punched you, but they were all very upfront about it. Good or bad restaurant? https://t.co/MDYHVV5XDC

WikiLeaks famously published thousands of emails related to Hillary Clinton and the Democratic Party before the election, which many thought swayed things in Trump’s favor. Last summer, Assange said that choosing whether to vote for Hillary Clinton or Donald Trump for president was like choosing between two different STDs. It’s unclear who Assange currently supports (if anyone), but he definitely has an opinion about what information should be released to the public—and how.

In July, Assange said that he reached out to Donald Trump Jr. about publishing his emails on WikiLeaks.

Contacted Trump Jr this morning on why he should publish his emails (i.e with us). Two hours later, does it himself: https://t.co/FzCttGSyr6

Days later, he tweeted in support of a lawsuit that claims Trump is violating the First Amendment by blocking users on Twitter.

I support this suit against Trump. It a constitutional violation for a state official to block political comments https://t.co/BbqPwNEpBG

Now Assange wants to discuss the administration’s transparency—even if it’s not intentional.

Apart from Trump's directness totally unwilling but transparent none the less. So what's more important, intent or effect?

But many thought Assange whiffed here and gave him examples of how the Trump administration isn’t actually transparent.

My dude, they're not even releasing White House visitor logs. https://t.co/P9xSWhJSU1

Of course, if Assange really cares about transparency, he could always leak more documents on the current administration.

Well I guess that explains why we haven't gotten anything about Trump or his administration from Wikileaks? Right? https://t.co/exv2yGJFUr

You mind sending over his tax returns? Thanks. https://t.co/G28tJiapmi