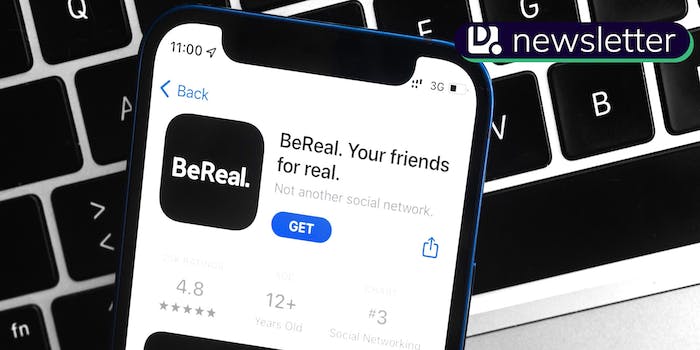 We’ve got a lot going on today, ranging from lawmakers being detained outside the Supreme Court to an app being the inspiration of numerous memes.

After our top stories, our Culture Reporter Michelle breaks down Netflix’s Persuasion in our weekly “Now Streaming” column.

We’ve also got a viral “Karen” story for you down below.

Let’s get into the news.

HACKING: An alleged Ukranian app purportedly designed to carry out DDoS attacks against Russia was actually just malware developed by Russian hackers. Our Tech Reporter Mikael reports that the discovery comes as Russia’s invasion enters into its fifth month, which has been marked by an unprecedented hacktivism campaign against the Kremlin.

MEMES: While BeReal was founded in 2020, its recent popularity among Gen Z has propelled the app into meme stardom this week. As our Contributing Reporter Gisselle Hernandez notes, the app—which markets itself as the antithesis to the picture-perfect Instagram aesthetic—has sparked a number of memes that have popped up online in recent weeks. You can check out the full report here.

PRIVACY: The ACLU revealed this week that the Department of Homeland Security accessed more than 300,000 location points from mobile phones, revealing the stunning scope of warrantless surveillance by the country’s largest domestic policing agency.

‘Persuasion’ and the art of adaptation

It’s a strange experience to watch a movie and watch it attempt to create the kinds of memes it hoped would go viral in real-time within the script.

Yet that exact scenario happened a couple of weeks ago as I traveled to New York’s Paris Theater and watched Persuasion, Netflix’s modernized adaptation starring Dakota Johnson that blends Jane Austen’s text with more anachronistic lingo while trying to emulate Fleabag. (I did not care for it.) And sure enough, the memes are out there.

It’s an adaptation that led more than one person to claim that Jane Austen was throwing up and “turning in her grave” and, using dialogue from the film, that “Jane would be ashamed.”

If you wanted a better version of Persuasion in 2022, another person suggested, look no further than Jennifer Lopez and Ben Affleck, who—after a second-chance romance worthy of one of Lopez’s rom-coms—flew to Las Vegas and got married over the weekend.

While Persuasion’s audience score on Rotten Tomatoes fared far better than its critical one, at least a few people who tuned in did so to hate-watch it (and harp on it on social media).

But Netflix doesn’t distinguish between people who genuinely wanted to watch Persuasion and people who wanted to watch Persuasion only to make fun of it: A view is a view—and people certainly tuned in. On Tuesday, Netflix announced that Persuasion “debuted at #2 with 28.72M hours viewed” and that “the film appeared in the Top 10 in 87 countries,” coming in only second to The Sea Beast, and as I write this newsletter, Persuasion is the top movie on Netflix in the U.S.

As people snarked all over Persuasion this past weekend, a Los Angeles Times interview with its filmmakers went viral for a nugget contained within a quote from co-writer Ron Bass revealing that he was “working on similar updates of Pride and Prejudice and Sense and Sensibility” and insisted that “I promise you that everyone involved in this adores Jane Austen.” For the people who took offense at Persuasion, it wasn’t exactly a comforting reveal.

It made me think, once again, at the kinds of Jane Austen adaptations we’ve gotten over the years: Faithful BBC films and miniseries, more stylized renditions, inventive takes, and modern AUs that might not look or sound like Jane Austen but very much embody her books’ spirit. In recent years, films like 2020’s Emma. and Fire Island won audiences over wholeheartedly. And just the other day, I watched Ang Lee’s Sense and Sensibility, the 1995 adaptation that won Emma Thompson a screenwriting Oscar, for the first time and was enraptured by it.

But I also keep thinking about the Persuasion that could’ve been: A traditional adaptation from director Mahalia Belo starring Sarah Snook (Succession) as Anne Elliot and Joel Fry (Cruella, Our Flag Means Death) as Captain Wentworth.

It’s long since been dropped; Snook confirmed last year that Fox abandoned that project after Netflix greenlit its own version, the one we got last week. But in a world where Jane Austen adaptations have a chameleon-like quality, who’s to say that one more wouldn’t have at least a welcome curiosity in the mix?

A conscious step for comfort, a giant leap for space exploration

Your new favorite socks are advancing space exploration! Conscious Step‘s new Space Exploration collection features out-of-this-world socks with rocket, galaxy, and constellation patterns. Each purchase supports the Planetary Society and funds innovative and exciting new space technologies. Shop Conscious Step to wear what you believe in, and get 15% off your first order with code MYFIRSTSTEP.

💄 In a viral video, a TikToker shared a bad experience at Ulta where an employee caused her to cry, with one user responding: “Ulta is legit the Mean Girls of makeup.”

🍕 A wave of anxiety spread across TikTok after a user claimed that Little Ceasers increase the price of its famous $5 hot-and-ready pizzas.

☕ A video of a Dunkin’ worker showing how they handle a “rude” request from a customer who asked for extra caramel in their coffee is going viral.

🍿 No summer movie watch list would be complete without epic movies from one of the most popular indie studios. These are the best A24 films you should binge-watch over the summer. *

🥝 Faced with harsh censorship, TikTok cannamoms fight against the stigma around weed and motherhood. If you want more stories like this, subscribe to the Passionfruit newsletter.

🎶 A video of a Smoothie King worker using AirPods while on the job went viral on TikTok, sparking a discussion about the use of headphones and earbuds at work.

🚗 Here’s how JuiceLand strikers and ride-hailing drivers are organizing online.

A customer in Panera Bread filmed a senior citizen who was dubbed a “Karen” that assumed a woman didn’t pay for her order and berated her until she cried. The video sparked a number of people to comment on how not-so-subtle the Karen’s “aggression” was.