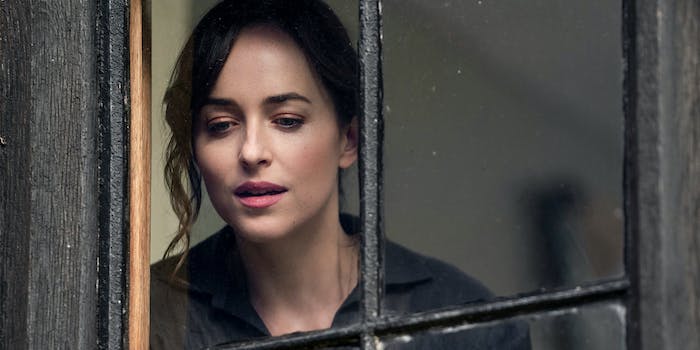 Netflix’s ‘Persuasion’ tries to blend Regency and modern, but it falls flat

Persuasion, in theory, wants it both ways. The latest adaptation of Jane Austen’s final completed novel from director Carrie Cracknell tries to marry the intricacies of Regency-set storytelling that helped to make Bridgerton a smash hit with a cheeky, fourth-wall-breaking heroine whose constant Fleabag-like observations attempt to make her #relatable. It wants to cater to Austen fans by looping in quotes directly from Austen’s novel, and at certain points, it does so heavily. But it also wants to include modern-day anachronisms like a heartbroken Anne Elliot (Dakota Johnson) showing the camera the “playlist” (read: a stack of sheet music tied together) that her former fiancé Frederick Wentworth (Cosmo Jarvis) made for her or another character bemoaning her inability to practice self-care and, later on, declaring herself an “empath.”

Release Date: July 15, 2022
Director: Carrie Cracknell
Streaming: Netflix
An attempt to modernize Jane Austen’s final novel falls flat on its face with cringey, stilted dialogue that leaves a poor, Regency ‘Fleabag’ knockoff in its wake—as well as the impression that ‘Persuasion’ doesn’t actually trust its viewers enough to keep up.

It’s a quirk that’s been done before, and successfully at that; look at Hulu’s The Great and Apple TV+’s Dickinson for two recent examples. In Persuasion’s case, there are some engaging performances and lush scenery, and its color-conscious casting is more than welcome. But the mix of older and newer tones never quite rises to the occasion. It leaves something half-baked in its wake and the impression that had Persuasion committed to one end of the spectrum or the other, it might have coalesced better. It might look like Persuasion and it might sometimes sound like Persuasion, but, more often than not, Netflix’s Persuasion operates as if it’s trying to sneak in a modern-slanted Regency second-chance rom-com underneath the veneer of Jane Austen’s more introspective novel mostly because Austen has name recognition.

That’s not to say that Persuasion, or any of Jane Austen’s other novels, are sacred: Like Shakespeare’s plays, the legends of King Arthur and Robin Hood, Greek mythology, James Bond, and Doctor Who (to name a few examples), Persuasion is a living, breathing story that’s more than adept at catering to any generation that encounters it. We have our favorites, are emotionally attached to whichever iteration we encountered first, and may initially be resistant to change; each new iteration has the potential to launch a new generation of fans. Although Persuasion may not have gotten the cinematic treatment as often as its older (and much more popular) sister Pride and Prejudice, it isn’t immune to this effect; just look at the reaction to the film’s first trailer to see that in action (and Cracknell spending part of the Persuasion press tour having to respond to it).

More straightforward adaptations of Persuasion already exist (I suggest the 1995 BBC film with Ciarán Hinds and Amanda Root if you want to backtrack), so Cracknell and writers Ron Bass and Alice Victoria Winslow went for a more contemporary approach to the interiority of Anne Elliot; even the title cards announcing each new location, a sleek sans serif font, lends into that aesthetic.

Instead of just being an observer or a listener, Anne makes snarky comments wherever she can manage, rolls her eyes so only we can see (there’s no Hot Priest to burst through the fourth wall), and can even predict exactly how members of her family can react down to a T. We see that in her interactions with her vain father Sir Walter (Richard E. Grant, chewing the scenery as usual), her arrogant older sister Elizabeth (Yolanda Kettle), or her self-centered and hypochondriac younger sister Mary (an entertaining Mia McKenna-Bruce). There are moments where Anne’s observations pay off, such as Anne answering Mary’s questions in Italian to see how long it takes Mary to notice, if ever. It’s a smart move on paper, and Johnson is more than game to embrace those aspects fully, but it comes with mixed results. Mostly, Anne comes off as a heroine we’ve seen before with only a fraction of the charm.

For Anne, those quips are the main source of amusement she has left. Eight years before the film begins, she was engaged to marry Wentworth, who was an unranked sailor with no fortune, so she broke it off. Anne’s in classic rom-com heroine mode: Some of her friends and family are more than happy to try setting her up with Wentworth (who’s visiting his sister and brother-in-law, the new tenants of the Elliot home), blissfully unaware of her past history with a man who now has a title, wealth, and enough charm to spare for everyone except Anne; for her, he huffs and glares and stews in his resentment.

It’s a breakup Anne never really got over, and now that she’s 27, she’s fully hit spinster territory. If Anne’s insistence that she’s “single and thriving” before cutting away to her drinking a copious amount of wine, crying in the bathtub, and refusing to get out of bed didn’t communicate that plainly enough, the various ways she says to herself, to us, and even family friend Lady Russell (Nikki Amuka-Bird) that she never got over Wentworth, shoves it in your face over and over again. By the time Sir Walter and Elizabeth retreat to Bath, they’re more than happy to push Anne onto Mary and her husband’s family.

This kind of repetitive approach bogs down the film; it first relays a particular plot point or backstory in modern-day English before bringing Austen’s dialogue to life a bit later on. In one scene, Anne recounts some backstory to grab Wentworth’s attention, but he’s later told the same story by another character despite having heard it before (which is then undermined by an attempt at slapstick comedy). One scene involving Anne and Wentworth being open with one another, while lovely on its own, undercuts a much more famous scene that takes place toward the end of the film and covers similar territory.

The introduction of Mr. Elliot (Henry Golding), the cousin and heir to the Elliot home and Sir Walter’s title, offers some fun, but the character gets in his own way and shows his cards well before there’s a reason to question them; he exists more as one of many barriers standing between Anne and Wentworth’s eventual reunion more than a character with an active set of motivations. Golding excels at exuding Elliot’s charm offensive and the fuckboy energy, but the film doesn’t seem to be interested in exploring any of his more prickly attributes, which only flattens the character.

It almost makes me wonder, did Persuasion not trust its audience enough to pick up on any of the subtleties, or the nuance involved in its story? Even without getting into the intricacies of what it did and didn’t do right by the novel—something the Austen fans who watch this will likely do in spades—it ends up being kind of a mess. Persuasion’s modern touches are too infrequent to work as a successful anachronistic take on Austen’s novel, and it’s too afraid of looping in Austen’s language that’s endured for over 200 years without holding the audience’s hand and including a more digestible quote alongside it. It tries to please everyone, but it might instead end up pleasing none.

Persuasion arrives on Netflix on July 15.