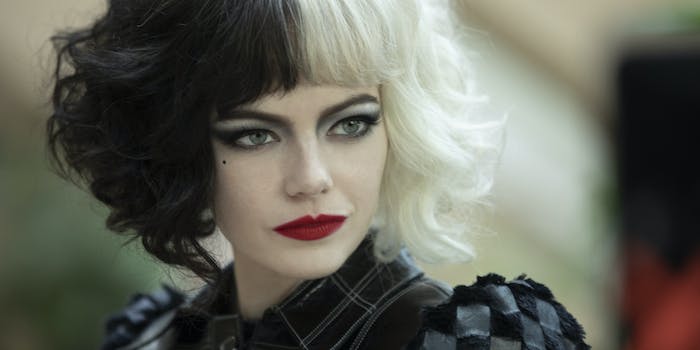 Review: Disney’s ‘Cruella’ is all bark with little bite

Throughout its 135-minute runtime, Cruella didn’t meet a moment that it couldn’t embolden with a needle drop. Ranging from mind-boggling to completely on-the-nose, the musical cues are a spectacle unto themselves. Most of the songs by artists ranging from the Rolling Stones, the Clash, and Queen to Nancy Sinatra and Blondie will be familiar to many viewers and might prompt some sing-alongs, but they might also take you out of the film long enough to make you groan—and Cruella has enough needle drops to take you out for a decent chunk of it.

Release Date: May 28, 2021
Director: Craig Gillespie
Streaming: Disney+
‘Cruella’ reimagines the origins of one of Disney’s most infamous villains in a lavish and campy prequel tale set amid the backdrop of ’70s punk London. While it fully leans into the aesthetics of the era with eye-popping fashion, it also leans into many of the worst inclinations of a prequel film that tries to over-explain questions nobody thought of asking.

Much of Cruella, Disney’s reimagined origin story for one of its most infamous—and downright evil—villains from director Craig Gillespie (I, Tonya), is like that. It’s a full-on spectacle, a war between two women vying for control of eyes and a fashion empire that’s waged not with knives or guns but subterfuge, heists upon heists, and an array of haute couture and extravagant fabrics. Each new outfit has to make the biggest statement possible, and the film hits its stride in the middle third of the film. But it’s often weighed down with an uneven script full of story beats, the nods (some more baffling than others) to One Hundred and One Dalmatians, and the eternal prequel conundrum of attempting to over-explain answers to questions people really weren’t asking in the first place.

As we’ve known her in previous iterations (Dodie Smith’s novel, the 1961 animated film, and the 1996 live-action remake), Cruella de Vil isn’t all that complicated. In One Hundred and One Dalmatians, Cruella openly lusts for furs and vows that she’ll “get even, just wait” after Roger and Anita refuse to sell Pongo and Perdita’s puppies to her. And she’s later so obviously a suspect in the puppies’ dognapping that you might as well Photoshop her head over I Think You Should Leave’s hot dog guy. Did we really need an origin story for Cruella de Vil? Well, either way, we’ve got one, adding to the likes of Maleficent, which tried to recontextualize Sleeping Beauty’s key villain to middling results.

Cruella’s Cruella (Emma Stone, with shades of her character in The Favourite), on the other hand, won’t go as far as to lust for a fur coat made of dogs. When we first meet her as a young girl, she’s a precocious and rebellious girl—“Cruella” is the name her mother Catherine (Emily Beecham) gives to Estella’s mean side—who’s set on becoming a fashion designer. But a tragedy leaves Estella on the run to London, and 10 years later after taking her under their wing, Jasper (Joel Fry, providing the heart) and Horace (Paul Walter Hauser, providing the comedic relief) scheme, scavenge, and pickpocket their way through the city with Estella; Estella, who still dreams of designing fashion, makes their disguises.

She eventually catches the eye of Baroness von Hellman (Emma Thompson), who heads one of the biggest and most impressive fashion houses in London. Thompson sinks her teeth into the role, embracing the wicked fun of playing a ruthless businesswoman who isn’t afraid to demand what she wants. She comes armed in business meetings with the scandals of her associates and has to pause when called out for doing something horrific because the accusation needs to be more specific. Constantly at her side are three Dalmatians, none of whom are anywhere near as nice as previous iterations of Pongo at his most playful.

As the Baroness takes Estella under her wing, Estella hangs onto her every word and thread, at least until new information comes to light. For the first time in years, Estella lets her natural two-toned hair and wild side flow and plots to take down the Baroness as Cruella. She recruits Jasper and Horace as her lackeys, gets a tailor named Artie (John McCrea) to help her with her creations, and propositions her old schoolmate Anita Darling (Kirby Howell-Baptiste)—now a gossip columnist who regularly attends the Baroness’ events—to photograph and document her every whim.

And those creations soar in a twisted version of The Devil Wears Prada; Aline Brosh McKenna, who wrote The Devil Wears Prada, is one of five writers credited on Cruella. The costumes, exquisitely designed by Jenny Beavan, are the highlight of the film as Stone and Thompson duke it on and off the runway for fashion supremacy with flashes of fabrics. In one instance, Cruella, wearing Doc Martens, a crown in her hair, and a train long enough to cover the car she stands on. In another instance, a train made of dresses flows off the back of a garbage truck. Almost none of those outfits is practical, but who cares: It’s an utter delight to watch.

Cruella offers a lot of compelling and contradicting elements for a fun romp. But every so often, Cruella has to remind us that it’s the origin story of Cruella de Vil and a One Hundred and One Dalmatians prequel with a wink or a nod to certain characters, bits of dialogue, or an explanation as to what makes Cruella tick. (If you were looking for an explanation of where the name “de Vil” came from, well, Cruella has it!) And while Stone fully leans into the camp of Cruella, rarely do the claws truly come out; at times, the character is rather inconsistent.

Embracing the “girlboss” mentality, Cruella constantly belittles Jasper and Horace (embracing the meaning of found family and a family in business) and thinks little else aside from getting revenge; Jasper and Horace love Estella, but Cruella eventually becomes grating to them. The furthest that Cruella will push the envelope is by expressing a passing thought that sounds downright horrific before trying to pass it off as a joke. Every time it looks as though Cruella will cross some kind of line, it pulls back.

“People need a villain to believe in, so I’m happy to fit the bill,” Cruella muses after hearing one of the media narratives being spun about her latest appearance. If only Cruella felt the same way.

Cruella is now out in theaters and available to rent via Disney+’s Premier Access for an additional fee.