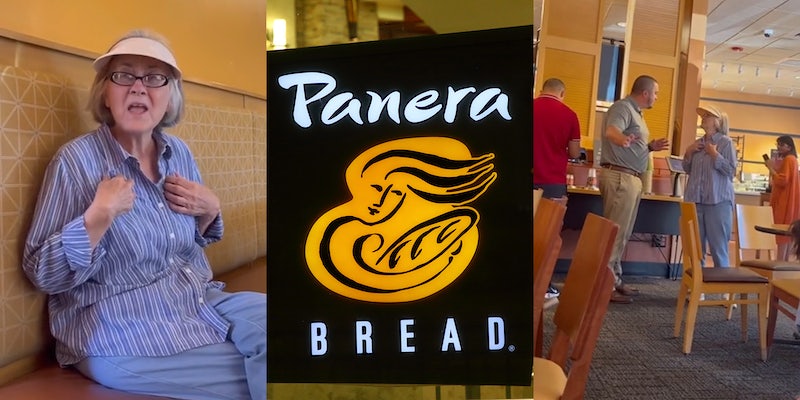 ‘Who paid for that? You can’t afford that’: Karen assumes woman didn’t pay for her Panera order, berates her until she cries

'I literally hesitated to post this for so long because of how embarrassed I was.'

A customer in Panera filmed a white senior citizen, dubbed a “Karen,” verbally accosting her to tears.

The video begins with the woman sitting down, talking to Maki. According to the caption, the incident happened two weeks earlier. “I literally hesitated to post this for so long because of how embarassed I was for crying and having a panic attack,” Maki added in a comment on the video.

@dramaqueenm5 Can’t believe this actually happened 2 weeks ago. Still a lot to process and can’t lie that it makes me sick to my stomach and makes me want to cry everytime I hear it. But the worse part was being humiliated for 3 minutes while everyone stared until I cried for someone to get a worker. Please be a kind person, simple as that. #redlands #microaggressions #karen #karensoftiktok #karensgoingwild ♬ original sound – Maki Tsuchiya

“Who paid for that? You can’t afford that, but you can afford that?” the woman says to Maki at the start of the video.

It’s unclear why the woman is so upset, but it appears she is under the impression that Maki didn’t pay for her order at Panera.

“It’s 10am. I don’t understand your aggression,” Maki responds.

“No, it’s not aggression it’s a question,” the woman says, pointing to Maki’s cellphone. “That’s aggression. You want me to call the police on you?”

“All I did was ask you if you paid for it,” the woman responds.

“Oh you’re very articulate. You did understand English. Do you understand other languages? Oh what you don’t want to have a congenial conversation?” the woman continues.

“What is wrong with you?” Maki asks.

“Nothing’s wrong with me. You make funny faces, though, like something might be wrong with you,” the woman says.

“I don’t get it; why are people so mean?” Maki asks while crying.

The woman tells her she’s “free to cry here.” “Oh, you’re gonna cry about having to pay? Yeah you can cry in public about paying,” she says.

The video then cuts to the woman standing up and yelling at Maki. She says she’s “sick of paying for others that don’t pay.”

At this point a bystander in the restaurant interjects. “You don’t have to scream and yell this is a public place,” he tells the woman.

Another man eventually approaches the woman and appears to ask her to exit the store. The woman continues to shout about being forced to “pay” while other folks get things for free. At the end of the video, an apparent worker walks up to Maki.

“Still a lot to process and can’t lie that it makes me sick to my stomach and makes me want to cry everytime I hear it. But the worse part was being humiliated for 3 minutes while everyone stared until I cried for someone to get a worker. Please be a kind person, simple as that,” Maki urged in the caption.

Maki indicated the incident happened at a California location in the caption and included several “Karen” hashtags.

The clip was viewed 4 million times. Maki placed a trigger warning for “microaggressions,” or the subtle bias against marginalized groups, in the text overlay on the video. Viewers pointed out how not-so-subtle the woman’s “aggression” was.

“The aggression isn’t that micro,” one of the top comments reads.

“*MACRO. I’m so sorry you had to experience this,” another said.

“I’ve had some Karen tell me once ‘in America we speak English’ and I had to just walk away and cry because I was more angry I’m sorry babe,” another shared.

Others pointed out how “nobody stepped in” for minutes.

“Was that employee at the end coming to check on you?? They should’ve intervened earlier. I’m so sorry this happened,” one commented.

TikTokers also reassured Maki that her reaction was totally normal.

“Just want to say that crying and panicking are legitimate and human responses to being attacked, just as much as yelling and clapping back,” a user noted.

Some questioned why the woman even thought Maki received her order for free. Others speculated Maki is part of Panera’s sip club, which allows members to get unlimited drinks. Many members reportedly walk into the store without even speaking with employees to get their drinks and refills. However, Maki made no mention of the sip club.

The Daily Dot has reached out to Maki for via TikTok comment.