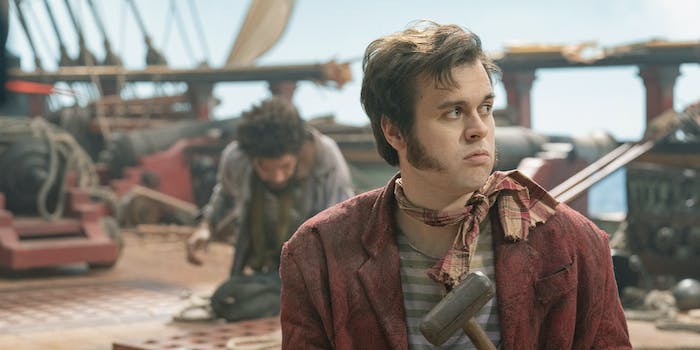 "Ever been sketched?" In episode 5, this line kicks off a hilarious and insightful subplot about homophobia among the show's pirate crew.

Starting out as a lighthearted sitcom, HBO Max‘s Our Flag Means Death is deceptively complicated—a genre hybrid that combines a Ted Lasso-style comedy protagonist with queer romance and a clever twist on the pirate genre.

Season 1 runs nimbly along the tonal register between goofiness and tragedy, specializing in simple gags with an iceberg of deeper meaning beneath the surface. One of my favorites comes in episode 5—a dick joke with layers. (Warning: This post includes spoilers for the full season.)

At this point, the two lead characters, pirate captains Blackbeard (Taika Waititi) and Stede Bonnet (Rhys Darby), have begun their tentative courtship. They’re a classic odd-couple duo: Stede as the frivolous, naive leader of an incompetent crew, and Blackbeard as a fearsome pirate veteran. Neither are here for this particular scene, however. Our star players are Stede’s diarist Lucius (Nathan Foad), Blackbeard’s spiteful sidekick Izzy (Con O’Neill), and Fang (David Fane), a secondary member of Blackbeard’s crew.

There’s a running joke among Our Flag Means Death fans that Izzy (loosely based on the historical figure Israel Hands) is the only character who thinks he’s in a “real” pirate drama. Idolizing Blackbeard’s bloodthirsty reputation, he’s horrified by Stede Bonnet’s upbeat hijinks. He’s similarly disgusted by Stede’s misfit crew, with Lucius as an obvious target. In addition to having zero nautical skills, Lucius is very openly gay. His mere existence is enough to send Izzy into a tooth-gnashing rage. After catching Lucius having sex with his crewmate Black Pete instead of working, Izzy calls him a bitch and orders him to clean the ship’s hull.

We can easily predict this is the set-up for a homophobic bully to get his comeuppance. However Our Flag Means Death—a show with more queer characters than explicitly straight ones—invariably goes beyond the simple, obvious choices.

After giving Lucius his orders, Izzy leaves Fang to watch over him—another grizzled member of Blackbeard’s crew. This turns out to be a mistake because after some brief flattery (“Has anyone ever told you you have stunning cheekbones?”), Fang abandons his post so Lucius can draw his portrait.

“I’ve never had anyone take interest in my form before,” says Fang bashfully, posing naked in the captain’s quarters. “Well, you’ve never met anyone worth a damn then,” Lucius replies. And the thing is, he means it.

Although Lucius manipulated the situation to get out of work, he seems to genuinely enjoy drawing Fang, a chubby, middle-aged guy who isn’t conventionally “TV hot.” Our Flag Means Death is a rarity in American comedy, in that it portrays fat characters as desirable, unremarkable, and generally free from fatphobic taunts. And its depiction of queer identity and community goes way beyond the central romance, as proven by this episode’s conflict between Izzy and Lucius.

“That’s not a bad likeness,” comments one of Lucius’s crewmates, checking out Fang’s portrait. “You’ve really captured something.” He’s unfazed by the nudity. Then the camera cuts to reveal what Lucius is actually drawing: An extremely detailed sketch of Fang’s penis. Just the penis, and nothing else.

Naturally, this is when Izzy enters the room, precipitating a meltdown.

The dick reveal is both a shriekingly unexpected punchline and the set-up for Izzy’s downfall. Because as the next scene confirms, Izzy just isn’t on the same wavelength as everyone else. “You’ve been a proper little seductress, haven’t you?” he sneers at Lucius, hoping to cause friction by “revealing” that he drew Fang in the nude. But Lucius’s soon-to-be-boyfriend Black Pete doesn’t care. “He’s drawn most of us,” he remarks.

“See?” says Lucius. “We don’t own each other.” Izzy, painfully repressed, is the only person who has a problem here. “Ever been sketched?” Lucius enquires, turning flirtation into a weapon. The confrontation ends with the crew laughing as Izzy flees the scene.

In earlier episodes, Izzy is portrayed as a kind of asshole middle-manager. However, this exchange with Lucius lays the groundwork for a more tragic and twisted arc. In a show where most of the main characters are either queer or comfortable with queerness, Izzy is the lone homophobe—and the main person who suffers under that homophobia is himself.

Perpetually fizzing with rage, actor Con O’Neill injects an extra frisson of horniness into his scenes with Lucius. Izzy is both repulsed and fascinated by Lucius’ sex life. He leans into Lucius’ personal space, relishing his own malice. When he realizes the rest of the crew isn’t on his side, he’s shocked—not because he craves their support, but because he can’t comprehend their casual, friendly worldview. “We don’t own each other” is an alien sentiment, not least because Izzy himself wants to be owned.

As the season progresses, it becomes clear that Izzy isn’t just loyal to Blackbeard—he wants to be dominated by him. After years as Blackbeard’s right-hand man, he can’t understand why his captain would abandon notoriety to settle down with Stede Bonnet, the frilly-shirted antithesis of a murderous pirate lifestyle.

There’s nothing stopping Izzy from just leaving the crew, but he can’t seem to do it. Instead, he dedicates himself to sabotaging Blackbeard’s relationship, manipulating him into the same miserable state as Izzy himself. He’s the living embodiment of internalized homophobia, trying to punish everyone for his own thwarted desires. Above all, he wants Blackbeard to return to the violent, macho persona of his glory days—both because Izzy’s own identity is tied to Blackbeard’s image, and because Izzy is a masochist. He wants Blackbeard to be dangerous enough to hurt him, as proven by an unforgettable scene in the season finale.

Before all that though, the joke’s on Izzy. His homophobia is only momentarily treated as a threat in episode 5, and by the next scene, he’s a figure of ridicule. This neat segue between silly comedy and deep character work is part of why Our Flag Means Death inspires such a passionate audience response.

From a representation standpoint, OFMD is unique: A literally and thematically queer mainstream sitcom, with queer and trans creators shaping the story. Like the underrated Black Sails, it uses piracy as a way to escape colonialist, homophobic frameworks for historical storytelling.

In one of the show’s more serious scenes, Oluwande points out that most people don’t become pirates by choice. They’re forced into it by desperation. This includes Blackbeard, who sees Stede as an escape route from piracy. Similarly, Stede’s wealth acts as a kind of Universal Basic Income experiment for the crew of the Revenge. After some early gripes, they settle into a relaxed community where they value each other as people. There’s no real conflict over gender, sexuality, power, or lack of nautical skill.

Needless to say, this infuriates Izzy, who values two specific traits: Violence and utility. He’s so poisoned by toxic masculinity that he can’t grasp why people might just enjoy each other’s company. This turns him into a kind of self-perpetuating homophobia machine—and for now, we don’t know why. Season 1 didn’t delve into his backstory. It simply introduced him as a uniquely fucked-up guy in a cast of characters who are (for the most part) refreshingly in touch with their sexuality.