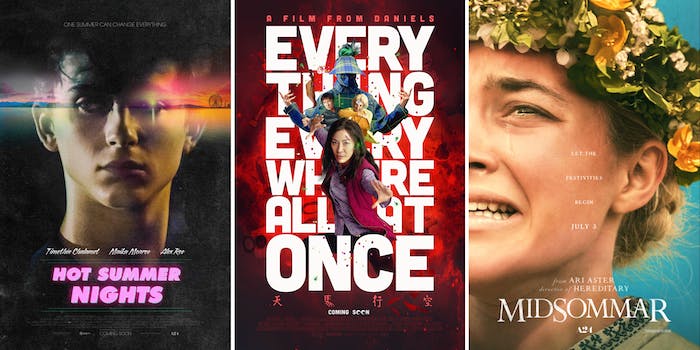 The best A24 movies to watch for Midsummer

Midsummer is upon us, so when it gets too hot outside, head indoors to enjoy the summer with some of the best a24 movies available to stream.

The start of the summer is upon us once again. Longer days, warm weather, summer Fridays—all the things we love about the season are about to be in full swing. If you’ve been waiting for this all year and want to do something special to commemorate the beginning of summer, we’ve got you covered. In honor of our favorite time of the year, we’ve rounded up the best A24 movies to watch for Midsummer. Get ready for horror, heartbreak, romance, thrill, and so much more.

The Best A24 Dramas for Midsummer

This is possibly the newest A24 movie on this list (as of writing, it’s still showing in theaters). It’s a classic A24 movie—complete with mind blowing lighting, set design, cinematography, and storyline.

Everything everywhere all at once follows the story of Evelyn Wang, a chinese immigrant who runs a failing laundromat with her husband Waymond. Life seems to be going downhill fast—dealing with a daughter she doesn’t understand, a husband she feels is nothing more than a burden, and an IRS agent who seems to be out to get her—until an interdimensional rupture begins to unravel her reality.

Can she come to grips with what the world is asking of her and save her family in the process?

In this smash hit coming-of-age movie, we follow Christine McPhearson (or Lady Bird, as she likes to be called) into her senior year of high school. She’s not your typical teenager. Having grown up in Sacramento California, she longs for a life of more—more intrigue, more class, more adventure. There’s no time to savor her last year of adolescence, only time to prepare for what’s ahead.

Watch as she falls in love, trys out for the school play, gets her heart broken, and applies for college in this film that’ll have you wishing you could slow down the time.

In comedian Bo Burnham’s feature film, he captures the reality of growing up in this tech centered world.

Kayla’s survived middle school, and now she just has to make it past her final few days of eighth grade. But it’s not easy. In fact, they’re full of all the eighth grade awkwardness, self-loathing, angst, and embarrassment you might remember from your middle school days.

Kayla finds it hard to interact with her peers face to face, and instead prefers to keep all interactions via social media. While her day to day is spent keeping quiet and out of everyone’s way, the night time finds her vlogging for her youtube channel offering advice on how to be the most authentic version of yourself you can become.

It’s a sharp look inside the mind and reality of a kid who sees people “having it all” and just wants a bit of the pie.

The Best A24 Romances for Midsummer

If you love Miles Teller, Shailene Woodley, and romantic movies, The Spectacular Now is your next must-watch. Miles plays Sutter, the popular life-of-the-party highschooler, while Shailene plays Aimee, the introspective “nice-girl”.

After Sutter’s girlfriend breaks up with him, he goes on another bender—partying hard and falling fast. He wakes up on Aimee’s lawn, and finds the nice girl to be a welcome distraction to his problems. He’s your average middle-America popular jock type—content with drinking the day away, working at his mediocre retail job, and holding no ambitions for his future. Aimee changes that.

She falls head over heels for him, and he for her. Suddenly he has a purpose and a drive to do what he never thought he could be capable of. But will he lose her along the way?

As much as Waves is a romance, it’s also a drama, thriller, and soap all in one.

Set in South Florida, Waves follows the lives of a middle class African-Amerian suburban family as they deal with the after-effects of strict parenting, circumstance, and communication. Their son, Tyler, is a part of the high-school wrestling team and constantly fights for his father’s approval. After an injury, Tyler turns to pain killers so he won’t have to deal with his fathers disappointment at his inability to compete.

His girlfriend, played by Alexa Demi, is a calming presence in his life, until she gets pregnant. The stress of dealing with the unplanned pregnancy, pain killers, and pressures of his father eat at him until there’s nothing left.

After the unthinkable happens, can his family recover from each of their separate trauma’s and heal together?

The Best A24 Horror Movies for Midsummer

This cult-favorite horror film from A24 will chill you to your bones.

Annie’s mother is mentally-ill, and when she passes, the family mourns her in different ways. Both Annie and her daughter begin tiptoeing the line of the supernatural, picking at the hidden family secrets that have plagued them below the surface for ages.

After another tragedy strikes the family, all hell breaks loose taking hold of the innocent and non-innocent alike.

An American couple on the brink of dissolution is held together by a family tragedy. Dani, played by Florence Pugh, is grieving, and Christian, played by Jack Reynor, feels stuck.  When Christian’s college friend invites them along on a once-in-a-lifetime trip to enjoy Sweden’s Midsummer festival like only a native can, they jump at the chance. But the carefree summer turns out to be anything but when the natives begin acting strange.

WATCH ON SHOWTIME FOR FREE

The Best A24 Thrillers for Midsummer

Directed by the Safdie brothers, this thriller starring Robert Pattinson will have you on the edge of your seat for the entire 102 minutes.

When Connie (Robert Pattinson) forcibly removes his disabled brother from a therapy session to go rob a bank, he doesn’t think it’ll be a bust. But, after stealing $65,000 and fleeing in a getaway car, a dye pack explodes and causes them to crash. When police corner them, Connie’s brother gets caught and apprehended.

Spurred on by his love for his brother, Connie embarks on a crazy night-long journey to bail him out of jail.

It’s the summer of 1991 and it’s a hot one. Shy, sheltered Daniel, played by Timothée Chalamet, has just moved to Cape Cod for the summer. He’s about to be thrown into the summer of his life. He falls in love, finds a friend, and creates a drug empire that makes him as rich as he’s ever imagined. But at what cost?

Can the young boy who first arrived on the island handle his newfound fast life? Can he stay true to his new friend while following his heart? And will Cape Cod ever be the same again?

Adam Sandler plays Howard Ratner. He’s a once successful and respected jeweler working in Manhattan’s diamond district now turned gambler and debtor. He’s got a serious penchant for betting on basketball, and a gift for getting himself into sticky situations. When he discovers a rare opal mined in Ethiopia, he feels like his luck is about to turn. But with debtors on his heels, a Celtics game to bet on, and a star player hooked on his rare gem, he’s got his hands full and nowhere to go.