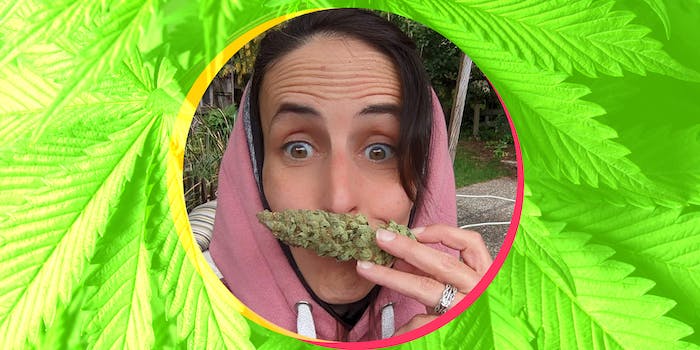 Faced with harsh censorship, TikTok cannamoms fight against the stigma around weed and motherhood

'They’re separating us because they know that we’re louder in numbers.'

When Amanda Rogers had to shutter her daycare because of COVID-19, she started having trouble sleeping. She experienced heightened anxiety and panic attacks as the future of her business became uncertain. In an attempt to mitigate this mounting stress, Rogers turned to cannabis.

Having tried cannabis in her 20s and finding its effects unappealing, Rogers was skeptical. Nevertheless, the Washington state resident took up smoking regularly again in 2020, and she couldn’t believe the health benefits.

“I was medicating. I wasn’t just consuming,” Rogers said.

As a mother to a 10-year-old son and an early childhood educator, Rogers knew that—in the eyes of many—her cannabis use was not conducive to her career in childcare.

“I can’t be the only mom that consumes pretty regularly and owns a business and kicks ass,” she said. “But, in the eyes of a lot of people, especially in childcare, that’s a big ‘no.’”

So, Rogers set out to connect with other “cannamoms” and normalize the use of cannabis to other parents. She started a TikTok account (@momsteaandcannabis) and began creating content. She posts infographics, debunks myths around cannabis and parenting, and shares her own stories all in an attempt to educate and connect with her audience. Since creating the account in late 2020, she’s garnered more than 10,500 followers. However, as her follower count steadily grew, so did the number of penalties TikTok lobbied against her.

TikTok’s community guidelines expressly prohibit, “Content that depicts or promotes drugs, drug consumption, or encourages others to make, use, or trade drugs or other controlled substances.” Cannabis is classified as a Schedule I drug in the United States, grouping it with the likes of heroin, MDMA, and other drugs designated to have a high potential for abuse with no federally-recognized medicinal benefit. While content creators know this not to be true of cannabis, its categorization as a controlled substance allows for bans across social platforms.

TikTok is not the only platform with strict rules around cannabis, but it’s become one of the most vigilant in removing content deemed to violate guidelines. Washington legalized recreational sales and use of cannabis in 2012, and all of Rogers’ posts are legal from a state standpoint.

Still, Rogers’ account has fallen victim to TikTok’s content purges. She says she’s been “shadowbanned” countless times. She’s been left without the ability to comment on others’ posts or live stream on her own account. Rogers cited peers who’ve had accounts shut down entirely and had to turn to backup profiles to continue posting.

In one of TikTok’s recent content sweeps, it banned the hashtag #cannamom. Just weeks ago, a click on the tag would reveal thousands of videos. The hashtag allowed cannamoms to find each other on the platform.

“A hashtag is important because that’s how you group people together,” Rogers said. “They’re separating us because they know that we’re louder in numbers.”

Amanda Leedur from Florida employs hashtags on her posts, too, to connect with other creators. Leedur is also a self-described “cannamom” who’s racked up more than 145,200 followers on the TikTok account (@boringmom420) she created in November 2020.

“I really just want to end the stigma around smoking weed,” she said. “Everyone thinks it’s this terrible thing and you can’t get anything done if you’re a stoner, and it’s not like that at all. It’s how I function.”

Leedur has dealt with her fair share of backlash. She’s received comments from people accusing her of providing a bad influence to her son and encouraging drug use in children.

“I’ve gotten negative comments saying it makes me a bad parent if I’m smoking or if my kid knows about it,” Leedur said. “I want it to be just as normal as other moms drinking at the end of the night.”

TikTok community guidelines seem to side with Leedur’s opponents; even though she stopped smoking on camera, she’s had videos removed and her account locked multiple times just for speaking about marijuana or showing paraphernalia.

“TikTok is hard,” Leedur said. “It doesn’t stop me, though, and I’ll continue to post.”

After TikTok banned #cannamom, some creators sought out other tags, like #cannaparent, in an attempt to revitalize their online communities. Rogers went a different route. Having always been tech-savvy, she built her own app in 2021 called Mom’s Tea and Cannabis where cannamoms can post to, learn from, and engage with each other. She has defined sections for different states and regions of the U.S. so users from the same location can engage with each other.

Rogers said she’s seen firsthand how her new platform builds that community TikTok once fostered. She regaled a story about a woman who posted at a time she was feeling lonely and isolated. Her post solicited a comment from another cannamom feeling similarly. The two Floridians lived close, so they met up to smoke together.

“A week later, [one woman’s] husband contacted me on Facebook,” Rogers said. “He couldn’t thank me enough for getting his wife not only out of bed but out of the house because she found a local friend through my group.”

Consequences handed down from TikTok mirror what those in the cannabis community have perpetually experienced offline. Once COVID safety measures allowed Rogers to try reopening her daycare, she was already immersed in the cannabis community online, and her clients had gotten word. Eight of the nine students Rogers expected to return to her daycare were pulled out by their parents.

“When I opened up again, my fear of what could happen, happened,” Rogers said. “My students and their parents dropped me because of what I do now.”

Cannabis entrepreneur Brooke Westlake lives in Nevada and has faced similar pushback. Westlake founded the Women in Cannabis Expo and has plans underway to open a product testing lab. Westlake is running for Washoe County School Board and said opponents have attempted to frame her cannabis use in a negative light. Westlake, however, touts the medicinal value of the plant despite its classification as a controlled substance.

“I had this major surgery where they removed a large section of my colon,” Westlake said. “Recovery was rough… [Cannabis] is pretty much saving my life at this point.”

Aside from business repercussions, both Rogers and Westlake cited personal ramifications from posting about cannabis. Rogers reported getting into heated debates while attempting to educate family members. Westlake said friends typically support her use of the plant, but many feel uncomfortable or ashamed discussing it openly.

As digital communities waver in the face of social media regulations, offline communities that began online continue to thrive.

This June marks the first annual Mom’s Tea and Cannabis retreat. Ticket holders will experience a weekend of relaxation, infused drinks, and crafts. Rogers is already planning another day-long retreat toward the end of the summer to give parents one last hurrah before school starts up again.

“The whole purpose of the weekend is for you to get to the house Friday, put down your bags, then do whatever the hell you want for the rest of the weekend, no questions asked,” Rogers said.

“It’s shocking to me when mothers want to consume or need to consume [cannabis] and they’re being told they can’t,” Westlake said. “It’s disappointing that this is the culture we put on people… They should be able to feel just as comfortable as if they were having a glass of wine. There should be no shame at all.”

Whether TikTok likes it or not, cannamoms aren’t slowing down. They’re just finding ways to adapt their message and continue building community on and offline.

Grace is a journalist based in Boston, MA writing about arts and culture, on and offline. Her work has also appeared in USAToday, The Boston Globe, and Leafly.com.