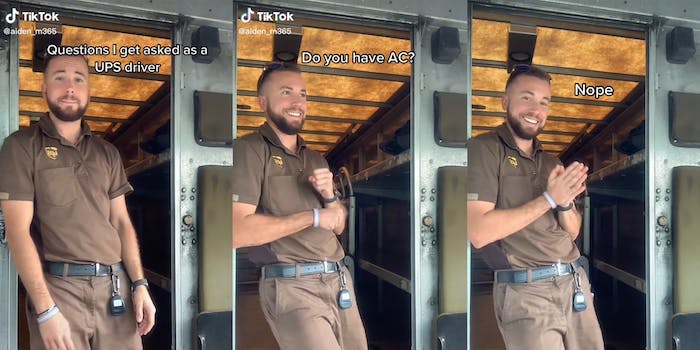 ‘It should be illegal’: UPS driver says he doesn’t have air conditioning in his truck, sparking debate

'UPS DRIVERS HAVE NO AC?'

Recently, a United Parcel Service (UPS) driver went viral after answering several frequently asked questions on TikTok. While user Aiden (@aiden_m365) offered three questions and answers in his video, it was one reveal that caught the attention of TikTokers

The driver says in the video that UPS trucks do not have air conditioning.

Under the now-viral video, which currently has over 4.8 million views, users offered their thoughts on this claim, with many saying that UPS should install air conditioning in its trucks.

The lack of air conditioning in UPS trucks has been a known issue for years.

In 2019, NBC News posted an article on the topic. The article claims that the inside of package delivery trucks can reach 140 degrees in summer, and that “at least 107 UPS workers in 23 states have been hospitalized for heat illnesses since 2015,” though the article speculates the true number of employees who suffered from heat illnesses on the job is “likely much higher.”

Furthermore, the article claims that “UPS has no plans to air-condition its delivery fleet,” even though working at this temperature can cause a host of issues.

“Work long and hard enough at those temperatures, and the body gives out,” the articles states. “Legs cramp, then seize. Heartbeats quicken, blood pressure drops. The kidneys, liver, brain begin to shut down.”

While it’s unclear why UPS is opting not to air condition its trucks despite these issues, users on Reddit theorize that the reasoning may be entirely practical.

“We stop so often that the AC would not get cold anyway,” a user offered. “Plus the doors are always open.”

“The doors are open so much from entry and exit and the trips are so short the ac wouldnt keep up to be effective,” another similarly claimed.

Some made more sinister speculations.

“Cheaper to payout the heat related deaths/ needing to go to the hospital, than putting a/c in trucks,” one said.

On TikTok, users were largely in agreement that UPS should figure out a way to resolve this issue.

“It should be illegal not to have ACs in every UPS truck,” one user wrote. “They need to upgrade the trucks.”

“UPS DRIVERS HAVE NO AC?! yeah i’ll be ordering a fan and cooler for their truck and just hand the box back to them,” a second added.

“UPS drivers are trained to work outdoors and for the effects of hot weather. … We never want our employees to continue working to the point that they risk their health or work in an unsafe manner,” they said.

“We proactively raise awareness of issues surrounding hot weather months through education. Our ‘Cool Solutions’ program focuses on hydration, along with nutrition and proper sleep before working in hotter temperatures. In addition, we provide water and ice for our employees, and we have fans in many of our vehicles,” they continued.

The Daily Dot reached out to Aiden via TikTok comment.