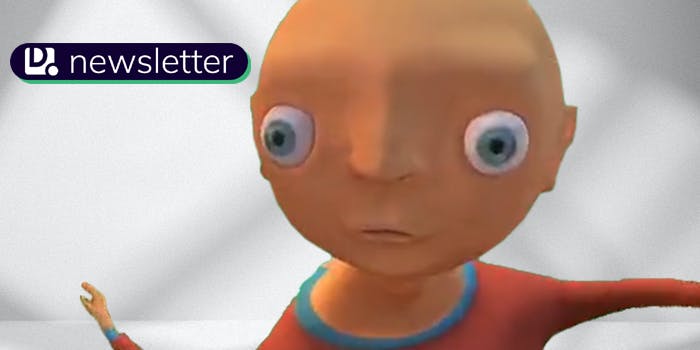 Newsletter: WTF is Horace and why is it going viral?

It’s Monday, which means it is time for our Tech Reporter Mikael to break down the latest wild conspiracy in his “One Dumb Conspiracy” column.

Besides that, we’ve got a ton of pressing internet culture news.

So let’s get into it.

JOB ANXIETY: As experts are predicting a recession in the not-so-distant future, some job-seekers may be feeling discouraged in their search for employment. One such TikToker shared her anxieties around the current job market, framing her observations by talking about job hunting on LinkedIn. You can read about the viral video here.

#HORACE: Drake’s new album has been pretty widely panned, but an old song has gotten a boost on TikTok thanks to Horace, a round wide-eyed animation in a red onesie who dances along with humans on the video-sharing platform. The hashtag #horace has more than 17 million views. You can read more about how Horace is taking over TikTok here.

REVIEW: Michelle, our culture reporter, reviewed Halftime, a Netflix documentary that has Jennifer Lopez looking back at her life and career. You can check out how she felt about the documentary here.

During an address to the media on Tuesday from the Roosevelt Room, President Joe Biden called for further government funding in anticipation of another viral outbreak.

The innocuous statement was immediately seized upon by conspiracy theorists, who spread footage of the remarks widely across social media.

One copy of the video was viewed more than 1.8 million times on Twitter alone, leading to a wave of apocalyptic warnings from those who believed a pandemic of biblical proportions was in the works.

In reality, pandemics are an assured fact of living on planet earth. After the failure of governments to adequately respond to COVID-19, many are now attempting to ensure that the next pandemic causes much less death and destruction through proper preparation.

But in the minds of conspiratorial users on Twitter, Biden was clearly broadcasting his intentions to bring about another global catastrophe.

“It’s almost as if he knows they’ll [sic] be a second pandemic because he’s going to cause it,” one prominent conservative user wrote.

Another Twitter user argued that the move was part of an even larger conspiracy that was also responsible for the world’s current woes.

Biden’s comments were also shared to r/Conspiracy, the popular subreddit with more than 1.8 million subscribers.

One Redditor even claimed that the government would release a new disease upon the globe in order to justify the further use of mail-in ballots, which supporters of former President Donald Trump believe are secretly being used to rig elections.

“My prediction has been late August for the new release so they can justify ‘mail-in ballot use’ again,” the user stated.

At least some users in the comments pushed back, however, noting that calls for preparation were hardly suspicious or evidence of anything.

“Yeah it’s like when someone says ‘there will be a storm again so we should build some infrastructure to take care of it’ after a huge storm hits and you’re like ‘oh shit is this man a witch how would he know about the future? So spooky,’” another user wrote mockingly.

Yet those kind of comments were vastly outweighed those that framed Biden’s comments as nefarious.

“They literally aren’t even fucking trying to hide this shit anymore because they’ve managed to dumb down so many people to the point of not even processing what they’re openly saying,” one commenter hysterically wrote.

The new conspiracy theory is nearly identical to countless others including the one from late last year regarding billionaire Bill Gates and smallpox.

Despite Gates warning for years that the world should be prepared for events such as a terror attack with a biological weapon, another such warning last November convinced conspiracy theorists that Gates would unleash smallpox by Christmas.

As is always the case, no such event took place.

Conspiracy theories regarding infectious diseases highlight how even when prepared, governments can only do so much when millions believe every natural phenomenon is actually a devious government plot.

Comprehensive coverage for your canine companion

Keep Fido secure with Fetch’s comprehensive pet insurance plans. They cover what other providers don’t, including hereditary conditions, dental disease, and exam fees. Just like your dog can count on you, you can count on Fetch to back up 90% of unexpected vet bills—for about $35/month! Get your paws on a quick, free quote now.

🗣️ In a viral video, a TikToker went over what to do when a co-worker publicly calls you out.

🙎 In a viral TikTok, a Staples worker quits his job on the spot in order to pursue his creative endeavors. Internet users are applauding him, calling it “encouraging.”

☕ In a viral TikTok, a barista at a small coffee shop says that one of Starbucks’ “crazy regulars” came in demanding that he make her an item off the Starbucks menu.

🎯 A Target employee complaining that they lost out on Team Member of the Month to a new hire has sparked debate on TikTok, with commenters disagreeing on the significance of the accolade.

🏘️ A woman on TikTok shared the “nightmare” experience she had staying at a Vrbo rental.

🎁 When it comes to finding a gift for a new dad, it can be tricky, so we scoured the internet for practical gifts he’ll appreciate.*

💼 A restaurant worker on TikTok says her manager sent her home early after she said she couldn’t stay later than her scheduled shift.

Viral TikTok footage shows a male Karen losing it at a Hampton Inn in Galveston, Texas, and shouting at an employee while bystanders looked on.