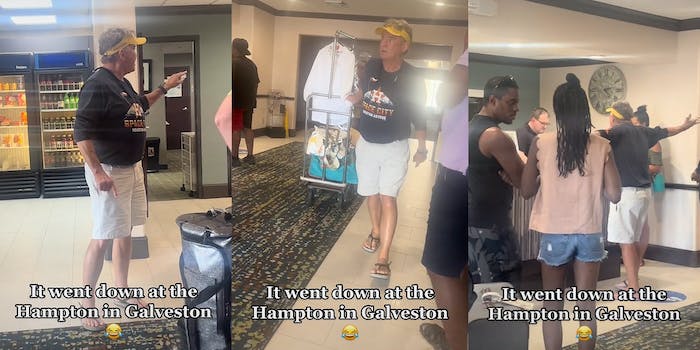 ‘That’s a public announcement of stupidity the way you’re talking’: Male Karen loses it at Hampton Inn in Galveston, gets in a shouting match with employee

'They do not pay front desk employees enough.'

Viral TikTok footage shows a male Karen losing it at a Hampton Inn in Galveston, Texas, and shouting at an employee while bystanders looked on.

The video was shared by TikToker Raven Jackson (@raviebabyy444) and has garnered about 1.3 million views as of Thursday. The on-screen overlay text reads, “It went down at the Hampton in Galveston.”

In the video, the Karen is seen walking away from the front desk in the lobby, shouting over his shoulder, “Well, do something about it, stupid.”

The employee at the desk snaps back, “Go fuck your mom.” The Karen is heard asking, “Are you kidding me?” and the employee replies, “you heard me.”

It is unclear from the video what prompted the argument.

Another clip in the video shows the male Karen stalking back to the lobby pulling a luggage cart. A handful of other patrons are standing in the lobby throughout the incident.

In a comment, Jackson wrote, “Everyone was all serious and there I was recording with the biggest smile on my face lmao.”

“Go fuck my mom?” the Karen asks, stopping in the middle of the lobby to address the employee.

“That’s a public announcement of stupidity the way you’re talking right there,” the employee replies.

The male Karen laughs dramatically before gesturing at the employee and the other patrons and counting them off, “Look at the stupidity right here, dumbass. One, two, three, four, five, six, seven, eight, dumbass.”

A woman following the man, who is presumably his wife, looks disturbed or embarrassed. As the male Karen tugs the luggage cart through the hotel exit yelling “fuck you,” his wife touches his arm and says “hey.”

Another clip shows the Karen back at the front desk facing off with the employee. The employee asks if he needs to call the police, and the Karen tells him to “go ahead,” adding that he plans to call the Hilton, the hotel company that owns Hampton Inn.

The two yell unintelligibly at each other before the employee loudly shouts, “Go call them from somewhere else!”

At that point, the male Karen circled back to previous insults. He spreads his arms wide, saying, “Hey, you told my mom to go fuck her, but she’s dead, dumbass.” The employee replies that he doesn’t care.

The Karen finally begins to walk away before turning to point at the other patrons, yelling, “If anyone stays here, they’re a dumbass because of that dumb son of a bitch. And I’m calling Hilton right now.”

Stopping by the exit again, he turns one last time to shout, “You said my mom, fuck my mom. She’s dead, dumbass.”

Some viewers commented about how many times the Karen repeated the “fuck your mom” comment.

“He was hurt by the mom comment lol,” one viewer commented.

“It sounds like he would do it if she was alive,” another viewer joked.

A third viewer said, “He keeps saying his mom is dead. If she was alive is he saying he would’ve……aww hell never mind.”

The majority of commenters appeared to side with the employee over the Karen.

“It was the ‘you heard me,'” another user wrote with several laughing emojis.

One TikToker said they’d met the employee before. “LOL we just stayed there last weekend and that employee was sooo kind and helpful,” they wrote.

Others speculated on whether the employee would lose his job.

“He’s probably going to get fired but man!! He went out with a bang,” one wrote.

“The concierge better NOT lose his job. He should get a raise ASAP!” another viewer said.

The Daily Dot reached out to the TikTok creator via TikTok comment and to Hilton Hotels and Resorts via email.