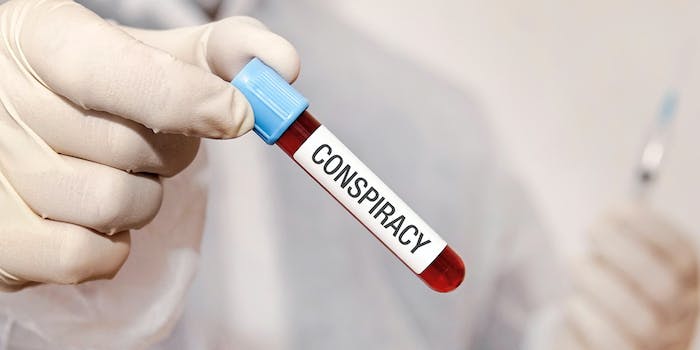 Online, the paranoia and misinformation is rampant.

The global outbreak of the monkeypox virus is already inspiring conspiracy theories. And just like last time, many falsely claim the outbreak is caused by the COVID-19 vaccine.

Monkeypox is a rare virus endemic to Africa, where it usually spreads from animals to humans. Human-to-human transmission occurs when there’s close contact with infected fluids, respiratory droplets, or contaminated materials such as clothing, according to the World Health Organization (WHO).

Thus far, the WHO reports that there have been roughly 100 cases identified in 12 countries where the virus is not endemic, making this the biggest outbreak in decades. Health officials are investigating dozens of additional suspected infections. There are two confirmed cases and one suspected in the United States.

Monkeypox causes a rash and symptoms similar to the flu. It’s similar to, but less severe than, smallpox. Most people recover in a few weeks without treatment, but it can be deadly. The mortality rate is 3-6%.

The Centers for Disease Control and Prevention (CDC) reports that there is no proven treatment for monkeypox. However, the smallpox vaccine is at least 85% effective at preventing infection, per the CDC.

NBC reported on Monday that authorities suspect that the current outbreak is linked to sexual behavior at two large events in Europe.

The facts that this is a known virus that’s previously caused outbreaks, there have been a tiny fraction of cases compared to COVID, and that there’s a logical explanation for the monkeypox outbreak isn’t stopping conspiracy theorists from coming up with their own ideas.

“We have made a new fb group to smash the pandemic—the next one—to pieces,” they wrote of the group. (The monkeypox outbreak isn’t defined as a pandemic, nor is it expected to.)

Posts in the group falsely claim that the monkeypox cases are actually caused by COVID vaccines, and that pharmaceutical companies are behind it.

Disinformation linking the monkeypox outbreak to COVID vaccines is circulating on numerous platforms.

Anonymous users on 4chan are circulating this and other outlandish theories. Posts there claim it’s a “false flag,” “biological terrorism,” or part of a conspiracy. Many of the theories are bigoted, blaming Jewish people, people of color, or sexual minorities for monkeypox.

The international internet is infected with conspiracy theories about monkeypox.

The South China Morning Post reports that China’s Weibo platform is full of theories about the virus, including that the “U.S. let monkeypox loose.”

“It’s a biowar against us by our governments!!” an Instagram user baselessly claimed over the weekend.

A Rumble video with 40,000 views claims that the “Public Health Mafia” got “caught red-handed” planning the outbreak.

Right-wing commentator Tim Pool warned his 1.3 million Twitter followers that “lockdowns are coming,” simply because Belgium is requiring people infected with monkeypox to self-quarantine. Belgium enacted the measure after identifying four cases of the virus in the last week.

Pool’s followers chimed in with additional theories of their own. More than one opined that the outbreak and fictitious lockdowns he warned of are “just in time for the midterms.”

Although the monkeypox outbreak is grabbing headlines and attracting intense interest—likely due in part to the COVID pandemic—health authorities say that there’s no reason to panic. The last outbreak in the U.S. infected 50 people in 2003 and was quickly contained.

In contrast, more than two years after the first domestic case of COVID, the virus continues spreading and has killed 1 million.

“There is no evidence, to date, that person-to-person transmission alone can sustain monkeypox infections in the human population,” the WHO reports.