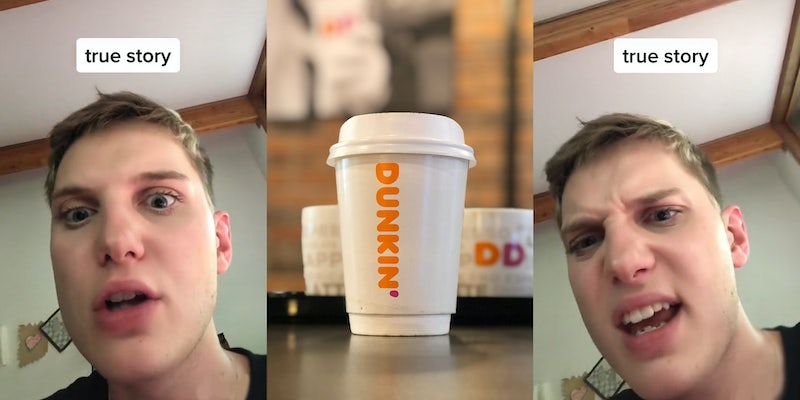 In a viral TikTok, a barista at a small coffee shop says that one of Starbucks’ “crazy regulars” came in demanding that he make her an item off the Starbucks menu. The creator says he has been getting these regulars since the Starbucks down the road was closed.

In the video posted by TikToker Dean Redmond (@deanredmond) on June 3, he says that a customer came in and tried to order an “iced caramel nitro cold brew with coconut milk.” Redmond says that he explained that they don’t have nitro cold brew or coconut milk at the coffee shop he works for but offered to make her something similar with oat milk instead.

“I bring her this iced caramel coffee because we don’t have nitro cold brew, and she’s like ‘Ew. This coffee tastes watered down,'” Redmond says in the clip.

He explains that she asked him to remake the drink with espresso and that he didn’t charge her for the first drink that she didn’t like. When she tried the second drink, Redmond says she said it tasted “even more watered down.”

Redmond continues that she then ordered a “hot caramel macchiato with whipped cream,” but was still unsatisfied with the drink, saying “they do this so much better at Starbucks.”

“So I give her her bill because the hot caramel macchiato had oat milk in it, and at my store, we charge a dollar extra for non-dairy milk. I give her the bill and she’s like, ‘You did not just charge me for oat milk. They don’t do that at Starbucks,'” Redmond says. “I give it to her again and I’m like, ‘I’m sorry, I have to charge you for this.'”

He says that the customer then asked for “a name to call” to complain that he was charging her for oat milk.

“So I give her a name to call, I give her a number, and she calls the woman and she’s like, ‘excuse me, your worker is charging me for non-dairy milk,” Redmond explains. “She’s like, ‘yeah, that’s literally what we taught him to do.'”

“She said, ‘Whatever. I’m only going to Starbucks from now on,” Redmond says.

The caption reads, “and she ended up writing a review basically saying never to go here and to go to Starbucks.”

The video has over 403,000 views as of Tuesday, with many commenters putting the customer on blast and pointing out that Starbucks actually does charge for non-dairy milk.

“Yeah, Starbucks literally charges 70 cents more for oat milk. Don’t know what this lady is talking about,” another said.

“You made her three drinks and charged her for one. people are so entitled,” a third added.

Several users claiming to be Starbucks workers also commented that this behavior is typical of some of their regulars.

“Starbucks worker here! Yes, that sounds exactly like our regulars, so sorry,” one wrote.

“I swear I have to deal with customers like that on the daily. I got yelled at for charging a lady 5 cents extra,” another said.

“As someone who has worked at both local coffee shops and Starbucks. The Starbucks customers are sooo much worse,” a third added.

The Daily Dot reached out to Redmond via TikTok comment and to Starbucks via email.