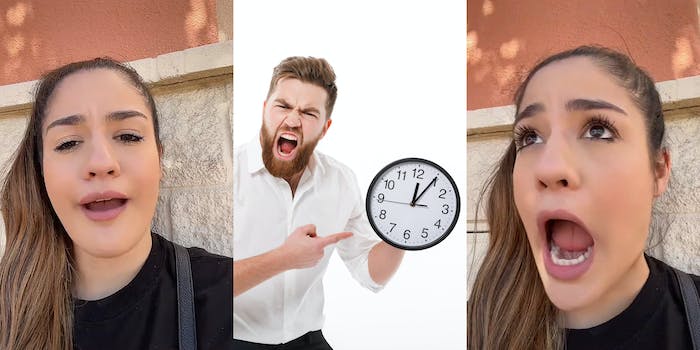 ‘Managers are shady like that’: Worker says her boss asked her to leave mid-shift—after first asking her to stay late

'I would've said thanks and clocked out.'

A restaurant worker on TikTok says her manager sent her home early after she said she couldn’t stay later than her scheduled shift.

The TikToker, known as Ava Marie (@avahayes69), says she was five hours into her scheduled six-hour shift when her manager asked her if she could stay for an eight-hour shift.

Ava Marie says she told her manager she had plans after work and would not be able to stay back. The creator also explains she was scheduled to work the following morning. Her manager allegedly responded that it was fine.

But apparently, it wasn’t fine because the TikToker says the manager returned two minutes later and told her to go home.

“[He’s] like ‘we don’t even fucking need you, you can go home,'” Ava Marie says. She says she asked him if she could stay for the last hour of her shift, but he allegedly told her “no, go home.”

Ava Marie’s jaw drops in the video to that response and says she ended up going home as instructed.

Her TikTok has received about 590,000 views on the social media platform as of Tuesday.

In a comment under her video, the TikToker adds that the incident happened on Father’s Day when her workplace had a three-hour wait.

“Watch them say you asked to leave or walked off. Managers are shady like that,” one viewer commented.

“Retail managers be the worst…I still have dreams I never quit and forgot to go to my shift,” a second viewer commented.

Some viewers claimed it was illegal for the manager to send Ava Marie home before her scheduled shift ended.

“Your entitled to your scheduled shift they can’t make you leave,” one user said.

“That’s called retaliation and is illegal,” another user claimed.

“Wait but honestly what can you do when they do that?” someone else asked.

In reply to that comment, Ava Marie wrote, “literally nothing that’s why I went home.”

The Daily Dot reached out to user @avahayes69 via TikTok comment.