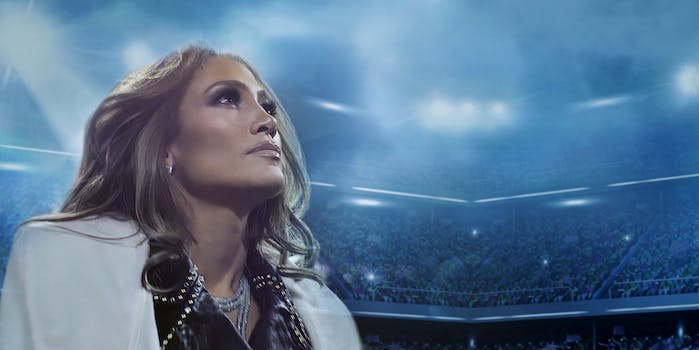 She pulls back the curtain during a rather momentous few months in her life.

“I have this incredible opportunity to show the world who I am,” Jennifer Lopez says at the beginning of Halftime in a voiceover that plays just before she’s set to perform at the Super Bowl. It’s reflective and self-aware, the kind of line that works both for the moment at hand and prep audiences for a reflection on the first 50 years of Lopez’s life. It’s also a double-edged sword, as Lopez opens up amid a fascinating but conventional look into one of the more monumental periods of her life from director Amanda Micheli. But like many contemporary documentaries about musicians and famous celebrities, Lopez is only willing to do that to a point.

Release Date: June 14, 2022
Director: Amanda Micheli
Streaming: Netflix
In the leadup to the Super Bowl LIV Halftime Show and a full-fledged Oscar campaign for her role in ‘Hustlers,’ Jennifer Lopez looks back at her life and career.

Mostly set during the seven-month period when Lopez simultaneously juggled a full-fledged Oscar campaign and prepared to perform on the world’s biggest stage, Lopez, even with her doubts and insecurities seeping in, is introspective about the kind of power she wields. In 2019, when the NFL is figuring out which artist to headline the halftime show at a time when the NFL is under massive scrutiny for how it’s handled race, Lopez was seen as the top choice to headline the show. But she had to co-headline the show with Shakira, which one member of Lopez’s team found insulting because it suggested that the NFL felt that one Latina artist couldn’t do the entire show on her own.

Perhaps unintentionally, Halftime serves as a great argument for why nobody should ever actually sign on to perform the Super Bowl Halftime Show. It’s months of prep, planning, maneuver, time management (which is even more critical when Lopez had to share that time with another artist), and how much of a message you can embed in your show. Lopez, who says she was profoundly affected by seeing images of children in cages at the U.S. border paired with racist rhetoric from Donald Trump, wanted to make a statement—an uphill battle she had to fight almost every step of the way.

At the same time, Lopez spent months on the campaign trail for the film Hustlers. Weaving in an overreliance on existing interview footage from various TV and panel appearances, Lopez and her collaborators, including director Lorene Scafaria, laid out their passion for the film. It’s obvious, both then and now, that Lopez cared for the project, and one of the film’s more affecting moments comes when Lopez reads a Glamour piece that highlighted the awards buzz around her performance in Hustlers, noting that “it’s thrilling to see a criminally underrated performer get her due from prestige film outlets,” a sentence that made her tear up. So when the proverbial shoe drops in one of the Academy’s most egregious snubs in recent memory, her disappointment rings through.

Those moments of vulnerability are sprinkled throughout as Halftime takes viewers through Lopez’s childhood in the Bronx and early career, a choice that feels pointed—and she has every right to hold back. And as some of the footage compiled together encompassing just some of the headlines, parodies, harsh words, and the racist, sexist vitriol she’s been subjected to throughout her career, you can understand why Lopez might be so guarded about what she reveals.

Like many reflections on the mainstream misogyny machine that reigned supreme in the early 2000s, many of those clips (interviews, parodies on TV, late-night monologues) are damning: She’s been mocked for her ambition, her abilities, her voice, and her outfits, and her body, to name a few things. For someone like Ben Affleck, witnessing just some of what Lopez had to deal with was shocking, but she expected it. As he recalled Lopez telling him, she’s a woman and Latina, so she expected it; she never expected to receive the kind of fair treatment he gets as a white man.

If you’re looking for some kind of deep dive into Lopez’s relationships and marriages (past or present), you won’t get it. Earlier, she complains that “no matter what I achieved, their appetite to cover my personal life overshadowed everything that was happening in my career.” And when she finally does acknowledge the elephant in the room, it’s only in an abstract kind of way.  “Even now, I’m not gonna get into what my relationships were like,” she says. “But in how it relates to me and the journey I’ve been on, I had to learn that the key was not so much about other people but about yourself.”

Conspicuously absent from Halftime (apart from a montage of footage of Lopez with some of her partners over the years that plays about an hour into the film) is Alex Rodriguez, Lopez’s fiancé at the time. (They got engaged in March 2019 and broke up two years later.) It’s unclear if he avoided the cameras or if he was around and he ended up on the cutting room floor, but the end result is the same: It’s as if he was erased from the narrative.

Ultimately, Halftime is more of a celebration as it ends on several career triumphs: Her Super Bowl performance, her performance at Joe Biden’s inauguration, and an epilogue that highlights the spread of her reach and some of the other work she’s doing. Even with the terrible treatment she often faced, she’s still widely adored, both by fans and those who view her as a role model for Latinas. And while she might already be decades into her multi-hyphenate career, she’s also still got much more to take on.

Halftime is now streaming on Netflix.