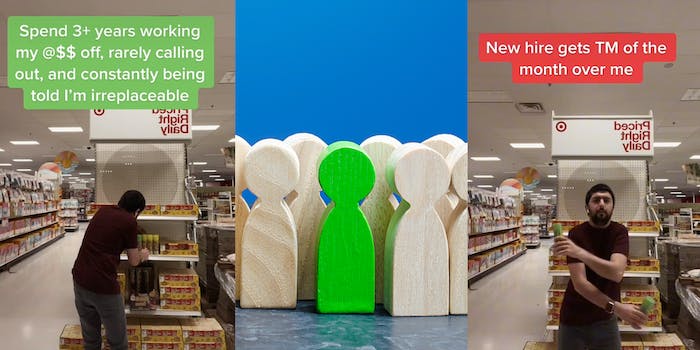 ‘Spend 3+ years working my ass off’: Target worker says he was snubbed for Team Member of the Month by new hire

A Target employee complaining that they lost out on Team Member of the Month to a new hire has sparked debate on TikTok, with commenters disagreeing on the significance of the accolade.

User Babak S (@shitbabaksays92) posted the clip, which has amassed 32,800 views, on June 8. In it, he dances to the viral TikTok sound “the joke is on you” while in his work uniform in-store. The on-screen text reads how despite having been at the store for over three years “working [his] ass off”, rarely calling in sick, and being “constantly told” he is irreplaceable, a new hire gets Team Member of the Month over him.

With countless commenters sharing similar stories of being under-appreciated at customer service jobs, many took the TikToker’s side.

“That’s when you say ‘thanks alot’ and quit,” one comment read.

“The only time they give you recognition is when they finally see you put in your week’s [notice],” another read.

However, not everyone empathised with the user.

“You’re doing your job: you’re getting paid. That’s all you need. It’s not a super power,” a user wrote.

“It’s crazy how adults feel the need to want recognition. If you’re doing a great job, then that’s all you need,” another added.

The TikToker responded to this second comment, writing, “It’s crazy how strangers see a video that’s meant to be funny leave a serious comment about it. It’s all in good fun.”

The user later clarified that the video was meant to be a joke as the debate continued.

“For the record: this video was meant to be funny,” he wrote. “I couldn’t care less about this. Target is my second job.”

The TikToker and Target’s Press Office didn’t respond to the Daily Dot’s request for comment via TikTok comment and email respectively.