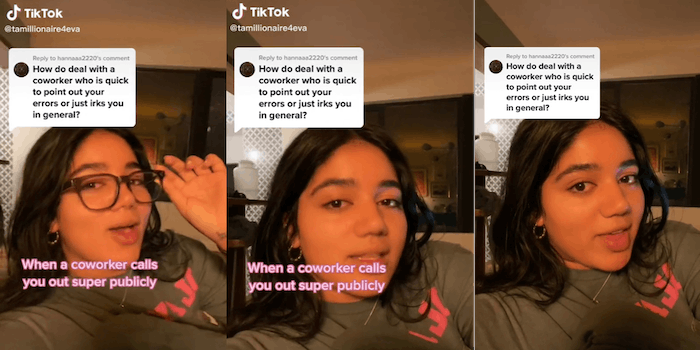 ‘This person should be embarrassed’: Woman shares what you should do when a co-worker puts you on blast in a meeting

'It's such an emotionally mature response.'

In a viral video posted on May 24, TikToker Varshini Satish (@tamillionaire4eva) went over what to do when a co-worker publicly calls you out. She was prompted by a question left by one of her followers. The video now has over 309,200 views.

“How do you deal with a coworker who is quick to point out your errors or just irks you in general?” user @hannaaa2220 asked in a comment.

Satish replied with a video, explaining how when she was younger, she would often back down when confronted by another employee. However, now that she’s older, her tendency “is now to double or triple down.”

“First thing you need to know is that you should not be embarrassed,” she says in the video. “This person should be embarrassed for calling you out in such a public setting like this.”

The TikToker proceeds to provide what a professional should say when in the situation. She suggests first making a joke of the situation in preparation to “go in for the kill.”

“Then you say, ‘In all seriousness, I don’t think this is the most effective or kind way to give someone feedback,’” Satish recites. “Feel free to let me know after this meeting is over and in fact, I’ll put about 15 minutes down on your calendar so we can talk through this.”

She later compares the situation to a Hannah Montana episode.

In the comments section, some users thank her for the advice while others claim she is the problem.

“This way is the high road. You are creating a boundary and you aren’t being unprofessional,” one user said.

“Yes!! I fully agree. Be nice but some people really get a kick out of treating coworkers unkindly and you HAVE to stand up for yourself,” another commented.

“Wait what? If you made a mistake, your response is to ‘double down?’ That sounds really immature and like you’re not taking accountability though?” a third user said.

Her response to this comment was that she, “literally specified that this is when it isn’t warranted/wrong from the other party.”