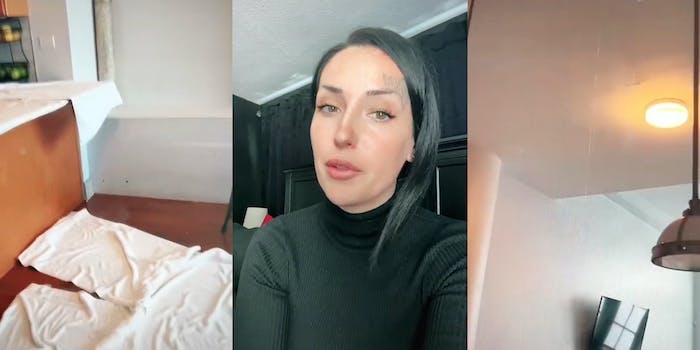 ‘Reason number 529 of why to stay in a hotel’: Customer shares ‘nightmare’ Vrbo experience in viral TikTok

A woman on TikTok shared the “nightmare” experience she had staying at a Vrbo rental.

The woman, Dame Jameson (@thedamejameson), says she recently got back from a New Orleans trip that she booked with Booking.com through a Vrbo advertisement.

She says the rental home she thought she was going to get was a “beautiful” three-bedroom, two-bathroom apartment with a view.

@thedamejameson #stitch with @trevaynebxtch #greenscreen ♬ As It Was – Harry Styles

Jameson says that when she and her companions arrived at the unit in the afternoon, the owner told her “Hey, parking is $75.” The TikToker says she sent him the money through Venmo, even though she says the advertisement promised free, on-site parking.

She says she and her companions went to bed early because they had activities scheduled for 9:30am the next day. At 6am the next morning, she says they woke up to the sound of water in the kitchen. She says there was water “everywhere” and that it was trickling from leaks in the ceiling. She shared a photo of the kitchen in her video.

Jameson says she called the owner, who allegedly told her maintenance wouldn’t be in until 7am. She says she wasn’t too worried since it “wasn’t that bad” yet. But by 7:10, she says the water was “raining,” and still no maintenance worker arrived.

So Jameson says she called the owner again, and he allegedly said he’d “be right there.” She says he didn’t show up until 9am, allegedly saying he had to take his son to football practice. By that time, Jameson says she knew she’d miss her 9:30am appointment. Also, the electricity had cut out by then, she says.

The owner told Jameson he’d have to put her and her companions in another unit, she says. He took them to an apartment building next door that had signs saying “DH Homes” and “No Airbnb short-term rentals,” the TikToker says, adding that she felt nervous.

Jameson says the owner took her upstairs but that the hallways reeked of cat urine, and the carpets were ripped up.

“It was just kind of gross,” she says in the video.

The unit they were put in was a two-bedroom, not the three-bedroom they had paid for, Jameson says. Plus, she adds, the owner told her the new unit would be more expensive.

In a second video, Jameson says she asked the owner to show her the listing for the new unit, but he told her it wasn’t listed on Booking.com. She says that when she tried to negotiate the price, the owner became aggressive and started puffing out his chest at her. To avoid conflict, she says she told him they can sort it out later.

Once the owner left, Jameson and her mother, who was also with her, decided they couldn’t stay at that unit and booked a room at a Royalton, Jameson recalls.

“So we move for the third time in 24 hours at this point,” Jameson says in the video.

Once they checked into the Royalton, Jameson says she called Booking.com to let it know what was happening, and it reached out to the unit owner. She says the owner refused to discount the first night stay and that if they wanted a refund for the remainder of the trip, they’d have to pay a $200 cleaning fee for the first unit, $150 for the parking pass, and “something” for the two front door keys.

Jameson says she told the owner she’d leave the keys for him at the Royalton front desk because she didn’t want to interact with him again. She says he was blowing up her phone with voicemails and “threatening” text messages.

She says she asked to negotiate the additional fees and if she could get some belongings her son had left behind, but it’s unclear if that was accomplished.

Jameson also shares text messages with the property manager and an email from Booking.com in other videos indicating she might get a refund. In another video, Jameson celebrates getting a refund, presumably for the Vrbo rental and fees.

Jameson’s first video was viewed nearly 600,000 times, with some pointing to Jameson’s experience, and others like it, as a reason why hotels are better than short-term rentals.

“Honestly, this is why I get a hotel room. period,” one said.

“Reason number 529 of why to stay in a hotel,” another echoed, to which Jameson responded: “I know I learned my lesson … I just wanted a home like environment to do a family breakfast for my moms birthday.”

The Daily Dot reached out to the Jameson via TikTok comment as well as to Booking.com and Vrbo via email.