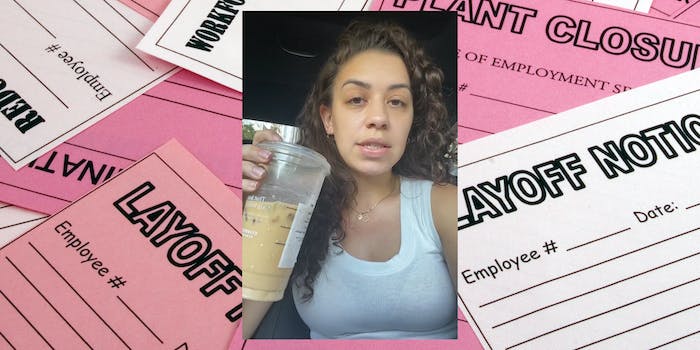 ‘The amount of people with more degrees and years of experience who are being laid off by the thousands’: TikToker’s video about job-hunting on LinkedIn sparks debate

'I don't feel hopeful at all.'

As experts predict a recession in the not-so-distant future, some job seekers may be feeling discouraged in their search for employment. One such person, Gabi (@gabisdoinggreat), shared her anxieties around the current job market, based on her observations of networking platform LinkedIn.

In her video, Gabi tells viewers she is seeing many people with industry experience and education being laid off.

“I don’t know if you guys are on LinkedIn, but the amount of people with more degrees and years of experience than me who are being laid off by the thousands is so disheartening,” she says. “I don’t feel hopeful at all about starting to job hunt and start a career in anything because these people have a 10-year jump on me and here they are, entering a recession, getting laid off and I’m here just fully unemployed. It’s bad. It’s bad out there guys.”

A Insider report shows multiple industries have already made sweeping layoffs as the cost of doing business outgrows any growth. Peloton, real estate brokerage firm Compass, Coinbase, Tesla, and other companies instituted a hiring freeze or laid off a certain percentage of staff to try and get ahead of these challenges, Insider reported.

Some commenters shared their experiences of having been through the last recession, commonly known as the “Great Recession,” which ran from December of 2007 to June of 2009. Others shared experiences of the current economic struggle.

“I graduated in 2008 during the last recession,” one commenter wrote. “The hard part is having to compete for entry level jobs against people with 10+ years experience.”

“GIRL! I’m part of the great layoffs of the last three weeks!” another commenter wrote. “Anytime I’d log into (LinkedIn), it was someone announcing that they got laid off too.”

“Graduated in last recession, start looking for work now,” a commenter wrote. “Chin up, you got this. Focus on you.”

The Daily Dot reached out to @gabisdoinggreat via email.