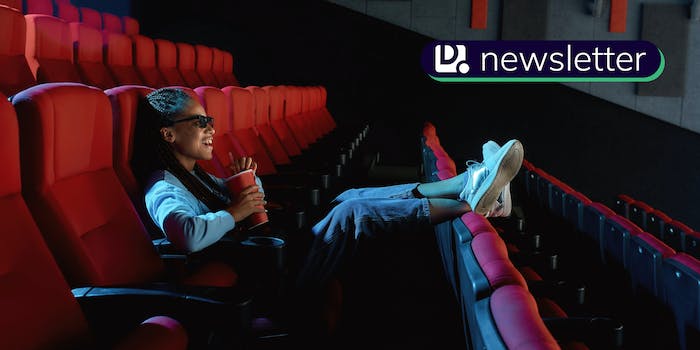 Newsletter: Would you sit next to someone in an empty theater?

Happy Friday! Today’s newsletter is packed with memes. Our Culture Editor Tiffany Kelly dives into the “about to make a new friend at the movies” meme in her weekly column. If you scroll down a bit, her pick for Meme of the Week are those cursed AI-generated images you’ve probably seen.

Plus, we’ve got news for you from across the ‘net. Let’s get into it.

REVIEW: Ms. Marvel, the latest Marvel show on Disney+, recently came out and our Culture Reporter Michelle dove into the first episode, saying that the show “easily wears its heart on its sleeve” and is a “slice-of-life view of a Marvel superfan.” You can check out her full recap (which does contain spoilers) here.

FAIL: Conservative personality Tomi Lahren thought she found a smoking gun that proved voter fraud is rampant in America. Unfortunately for her, the Los Angeles County Registrar and County Clerk is active on Twitter. The office saw her boast online and promptly shot it down. Our Politics and Tech Editor David Covucci breaks down the viral fail here.

Making a new friend at the movies

There are two types of people: those who prefer reserved seating in movie theaters, and those who enjoy the old-fashioned method of picking out your seat when you arrive at the theater.

Both of these seating styles come with risks. If you arrive too late to a popular, new film with open seating, you might be stuck with a front-row seat. However, if you reserve a seat in an empty theater, a stranger might reserve a seat right next to you. And then it’s just the two of you, awkwardly watching a film together in an empty aisle. The latter situation has become a meme.

“About to make a new friend,” writer Natalie Marlin tweeted this week, with a screenshot of an empty showing of David Cronenberg’s Crimes of the Future and the selection on a seat directly next to the only reserved seat in the theater. It received more than 400 quotes tweets and 100,000 likes.

“Lotta people assuming I actually [picked] that seat for real instead of just screencapping this for a joke and sitting way back from this person, c’mon now,” she wrote in a follow-up tweet. The Twitter account for Variance Films posted a similar joke. And another person posted a combination Wordle and “about to make a new friend at the movies” meme.

In February, a TikToker claimed a person seeing Spider-Man: No Way Home “need[ed] a friend” and selected the seat directly next to them. The video prompted outrage from people who said the situation would make them uncomfortable and force them to move.

In case you think no one would actually do this, Twitter and Reddit is full of stories from people who claim someone sat next to them in an empty theater.

It appears most people would rather have space between others in an empty theater. But this meme offers a warning: if you’re the first person to reserve a seat in an empty theater, you might unwittingly acquire a movie-going buddy.

An epic celebration of coffee for every connoisseur

Iconic Vices: Coffee Edition is the ultimate care box for the coffee lover in your life. Vices’ curated luxury coffee box comes with exotic specialty coffees like the craft chocolate blended with Ubuntu Coffee, an artisanal coffee scented candle, and a Coffee Lover’s Jigsaw Puzzle—an experience that’ll please even the most discerning coffee enthusiast. Shop now and save $50 on your first box with code DAILYDOT.

🍎 A teacher who posts videos of himself shirtless and doing TikTok dances says he has been placed on leave from his job because of the videos. The teacher says “Karens” called his superiors and told them about the videos.

📝 A woman on TikTok says that a man she matched with on Hinge sent her a two-page essay that included references to convince her to go out with him.

🌮 Resurfaced video of a Taco Bell employee knocking out an aggressive customer has gone viral on Reddit, with users defending the employee in the comments.

☕ Where is the best Starbucks? According to an office worker’s viral video, it is at the Warner Bros. Lot in California. Apparently it is “never crowded,” the “baristas are amazing” and it has a “large workspace.”

📵 Have you ever wondered what it’s like to unplug and escape to a no-tech getaway in the middle of nature? Here’s what happened when one of our editors spent the night with Getaway House. *

💼 A TikToker went viral for making a video praising employees who are brave enough to “ask the questions” that others are thinking during meetings.

🎵 In a viral video, a TikToker revealed that they get paid $4,000 to DJ a wedding by playing the Top 200 Wedding Songs on Spotify.

Now Playing: 🎶“Wrapped Up in Books” by Belle and Sebastian🎶