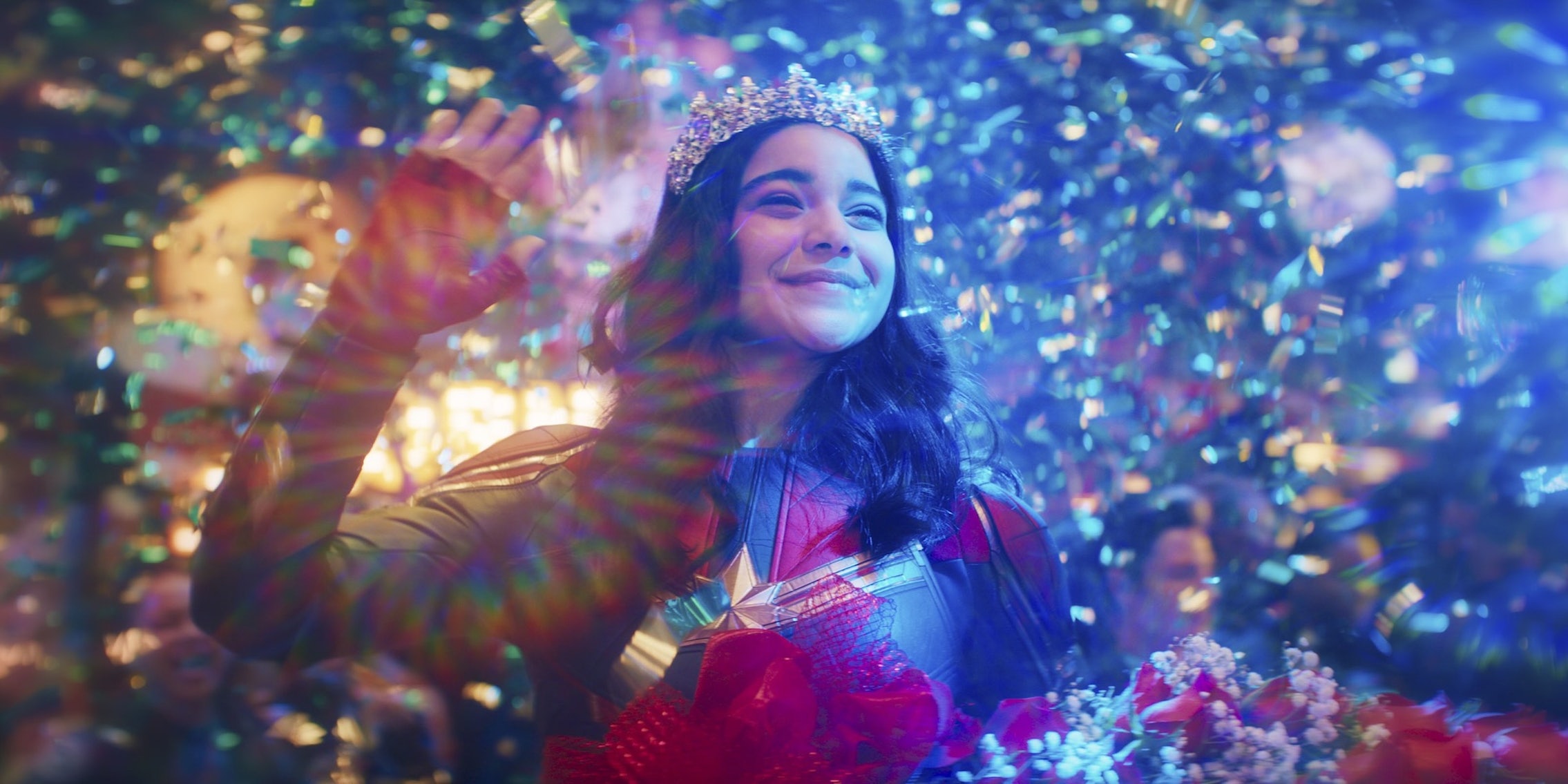 ‘Ms. Marvel’ debuts with a slice-of-life view of a Marvel superfan

Created in 2013 by G. Willow Wilson, artists Adrian Alphona and Jamie McKelvie, and editors Sana Amanat and Stephen Wacker, Ms. Marvel—Marvel’s first Muslim superhero—became an immediate sensation and fan favorite. And with her entrance into the MCU in Disney+’s Ms. Marvel, much of what people loved about her in the comics is already evident on the screen with the first episode serving as both a slice-of-life view into civilian life and her origin story.

What would it be like growing up in the Marvel Cinematic Universe? We saw hints of this in Hawkeye as a young Kate Bishop hero-worshipped Clint Barton for years and trained to become an expert archer after he saved her during the Battle of New York. But if you’re not thrust into the background of a climactic third-act battle as an extra and potentially traumatized for life, that superhero fandom might look something closer to how we interact with superheroes; they’re admired but also treated as larger-than-life characters.

At least, that’s how it is for Kamala Khan (Iman Vellani). Her room is covered wall-to-wall with her love of Marvel’s heroes—with Brie Larson’s Captain Marvel being her favorite—and in her spare time, she creates intricate YouTube videos—that very few people other than her best friends Bruno (Matthew Lintz) and Nakia (Yasmeen Fletcher) watch—about Marvel’s heroes such as how Captain Marvel actually saved the day during the final battle in Avengers: Endgame; she even uses interviews on Scott Lang’s podcast to back up her argument. Her current dream is to travel up to AvengerCon and win a Captain Marvel cosplay contest with the outfit that she and Bruno have been meticulously putting together.

Kamala’s inner world is just as colorful. Evoking the kinds of comic visuals that really popped in Into the Spider-Verse (another story starring another incredibly popular superhero who only debuted in the comics somewhat recently), Kamala’s imagination comes to life in a series of illustrations that dance on the walls of Jersey City’s buildings, oftentimes looking like graffiti. When she walks through a plan of action with Bruno about how they’re going to get to AvengerCon later in the episode, a plan that’s executed much differently than she imagined, it’s displayed through a series of animated storyboards.

Her imagination is seeping through, and not in a way that others in her life approve of. She quickly fails a driver’s test, has been caught doodling an unflattering sketch of a teacher, she’s been injured multiple times in gym glass, and even her principal tells her she needs to get her focus on her future. Late in the episode, her mother Muneeba (Zenobia Shroff) tells her to stop fantasizing and asks her whether she wants to be a good person or a “cosmic, head-in-the-clouds person.”

Muneeba and Kamala’s father Yusuf (Mohan Kapur) don’t really understand her affinity for superheroes, and while their love for her is never in doubt—nor is her love for her family—they’re firmly against her attending AvengerCon where who knows what could happen unless she goes with her father and they wear the same Hulk costumes only after her older brother Aamir (Saagar Shaikh) talks to them. Kamala’s against the idea because the con is her and Bruno’s thing but she also has a costume, one that she’s already insecure about (and her parents wouldn’t approve of), but she also ends up hurting their feelings in the process. Some parts of the dynamic lean a bit into familiar territory about generational clashes and overprotective parents, Kamala never looks down on them. But her insecurities still loom large, whether she’s being criticized about an outfit she’s trying on by an auntie and her mother or she’s looking at herself in the mirror.

Ms. Marvel easily wears its heart on its sleeve. It opens up Kamala’s world to include her high school, the Pakistani community her family is part of, and Jersey City itself, which could eventually feel like its own character (although it still has a ways to go before it gets there); the main villain, so far, is gentrification zeroing in. But once Kamala and Bruno get to AvengerCon, the world opens up even further as the camera hones in on photo-ops, cosplay, the kinds of knick-knacks that wouldn’t feel out of place at Comic-Con, and a mural paying tribute to Iron Man and Black Widow—whose death is finally given a proper acknowledgment in the MCU outside of the people who knew her best (Clint Barton, Yelena Belova).

With her Captain Marvel costume in tow and a bangle belonging to her Nani to put a final touch on it, Kamala is ready for her big moment. But the bangle, which Kamala gravitated toward earlier in the episode before her mother became noticeably worried about and placed the bangle in the attic, is the catalyst that finally gives Kamala access to her powers.

The topic of much debate prior to Ms. Marvel’s debut, Kamala’s powers are more cosmic in nature and align a lot closer to what Captain Marvel and Monica Rambeau are capable of; given that they’re all starring in The Marvels together, it makes sense. There’s a sense of wonder attached to people witnessing her shoot crystalized energy out of her hands and capturing it on their phones until it causes some of the convention’s decorations to come loose and start to threaten the attendees. But some aspects of her comic abilities are still intact: She’s able to stretch out an energized projection of her arm and hand to save a classmate.

Kamala is amazed at what she can do, but the trip to AvengerCon causes immediate problems. At home, she gets a lecture from her mother about sneaking out and being rebellious. But in a mid-credits scene, we learn that the stunt also raised some eyebrows over at the U.S. Department of Damage Control, where agents P. Cleary (Arian Moayed, reprising his role from Spider-Man: No Way Home) and Sadie Deever (Alysia Reiner) watch the video from AvengerCon with concern. And if a government agency in the MCU is concerned, it never turns out well for our heroes.