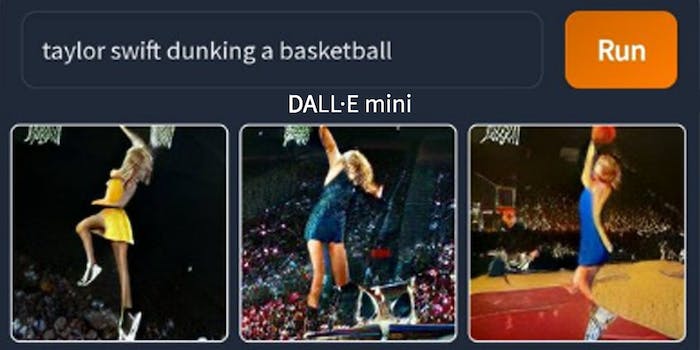 The AI program is generating a feverish stream of art.

If you’ve seen some slightly distorted images on Twitter recently, it’s not just reality continuing to collapse on itself. An open AI program called DALL-E mini has overtaken Twitter in the last week, churning out a surreal stream of warped art.

DALL-E mini is developer Boris Dayma’s take on the the separate DALL-E program, which was released earlier this year. It produces a series of images based on text prompts, like the original program.

“We’ve found that it has a diverse set of capabilities,” the DALL-E website reads, “including creating anthropomorphized versions of animals and objects, combining unrelated concepts in plausible ways, rendering text, and applying transformations to existing images.” A note on the DALL-E mini site states: “While the extent and nature of the biases of the DALL·E mini model have yet to be fully documented, given the fact that the model was trained on unfiltered data from the Internet, it may generate images that contain stereotypes against minority groups.”

The quality of DALL-E images appears to be better, but what the DALL-E mini produces is better suited to Twitter’s audience. According to Know Your Meme, a June 4 thread from @AliceAvizandum, which includes terrifying, Silent Hill-esque images of the Queen, is what kicked off the virality. Some truly inspired pieces of internet art followed.

A piece of Guy Buffet art was held up as a proto-DALL-E mini image.

The feverish nature of the meme’s production was also commented on, and became a meme itself. Traffic to the site apparently made it temporarily inaccessible over the last few days.