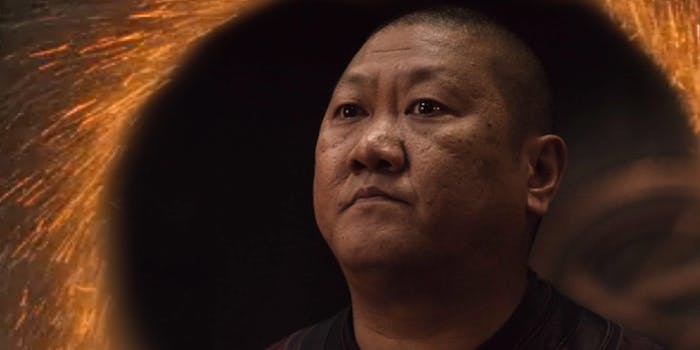 He's just grabbing a sandwich. He'll be right back.

Avengers: Infinity War is teeming with more than two dozen comic book characters. Somehow, the movie pulls it off. But it’s still hard to keep track of what happens to every character since some of them only get a few scenes. Like Doctor Strange‘s sidekick, Wong. (Spoiler alert: Infinity War plot points revealed below.)

Wong (played by Benedict Wong) appears in the New York scenes at the beginning of the film, when Ebony Maw and Cull Obsidian arrive to take one of the Infinity Stones from Doctor Strange. After teaming up with Strange, Bruce Banner, and Tony Stark for a few fight scenes, Wong then announces he is going back to the New York Sanctum to, you know, watch it. He then disappears through a portal. And that’s it! We don’t see him for the rest of the film. Meanwhile, the rest of the Avengers are risking their lives fighting the supervillain Thanos from destroying the universe.

We’ll probably see Wong in the next Avengers film. Maybe he’ll return at a pivotal point. But right now, the internet loves the fact that he decided to stay home and bow out of the fight. It’s the right call.

Memes of Wong peacing out of Infinity War early are all over Twitter this week.

wong vs. everyone else in infinity war pic.twitter.com/XsiM7E5QGz

Wong during the fight scene in Infinity War https://t.co/matxMtnYm5

People are also using a promo photo of Wong as a meme. If someone invites you to a sit-down birthday dinner or asks you to do something else that you want to get out of, simply pull a Wong and disappear.

"Hey I'm celebrating my birthday at a restaurant. You're invited!"

“sorry I missed your texts just woke up” pic.twitter.com/f7nArdvrEK

Wong may be the most relatable hero in Infinity War. Trouble begins and he gets the hell out of Dodge. Maybe he needs his own film?