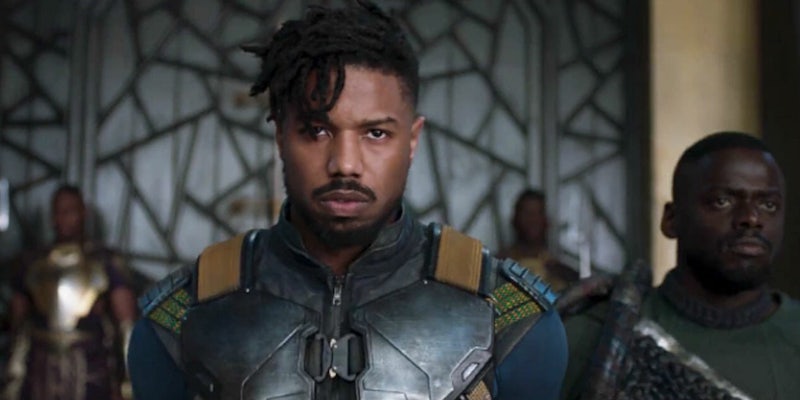 Get to know this longstanding 'Black Panther' villain.

But it’s a character played by Micheal B. Jordan that really has fans talking. He briefly appears in the trailer as Black Panther’s longtime arch-nemesis Erik Killmonger. Though his name isn’t as widely known as T’Challa’s, he appears in a good portion of Black Panther’s earlier comics from the 1970s. Here are eight interesting facts you should know about Killmonger before or after your see Black Planter in theaters.

Erik Killmonger was born under the name N’Jadaka in Wakanda while T’Chaka, T’Challa’s father, was still alive. Supervillain Ulysses Klaue (aka Klaw) invaded Wakanda to pilfer the fictional African country’s most valuable resource, Vibranium, and enslaved Wakandans to mine the mineral for him. In the comics, Killmonger’s family was captured by Klaue, and his parents died shortly after a war broke out. T’Challa barely managed to overthrow Klaue and kick him out of Wakanda after his father lost his life during the battle.

The usurper took captive prisoners, including N’Jadaka, with him after he is thrown out of the kingdom. Sometime later on down the line, N’Jadaka escapes from Klaue and takes refuge in the U.S. where he changes his name to Erik Killmonger before going on to get a dual Ph.D. in engineering and business from the Massachusetts Institute of Technology. Around that time, he vowed to exact revenge on the Wakandan royal family, blaming them for his parent’s death. He made his first appearance in a comic titled Jungle Action #6 in 1973.

Killmonger got a slightly different origin story for the Black Panther movie. Here’s what executive producer Nate Moore had to say about the antagonist’s motivations.

“I think Killmonger has his own opinion on how Wakanda has been run and should run, and what I think Michael brings to the table is sort of a charming antagonist, who doesn’t agree with how T’Challa is running things, frankly. That puts T’Challa in a difficult situation. Killmonger is a voice of a different side of Wakanda.”

2) Killmonger actor Michael B. Jordan was the perfect choice for the role

What makes Michael B. Jordan a great Erik Killmonger? Well, he’s a spectacular actor and was dedicated enough to get ripped to play the role of Black Panther’s adversary (even more so than his workout routine for boxing movie Creed). But what comics nerds will really appreciate is that he was already a fan of Black Panther comics, as evidenced by an interview he did with Wired.

3) Killmonger died and was brought back to life

During an intense battle against the Black Panther, Killmonger was narrowly beaten by the royal heir and fell to his death over the Warrior Falls. When Killmonger reappeared in the comics, he had been reanimated by comics villain The Mandarin before being fully resurrected by the Altar of Resurrection.

4) Killmonger was Black Panther for a brief time

After his resurrection, Killmonger went back to his usual tactics of antagonizing T’Challa and Wakanda. The duo faced off in a rematch atop the Warrior Falls after Killmonger attempted to incite a civil war by ruining Wakanda’s economy. Killmonger gained an upper hand after Black Panther became distracted by the sudden arrival of U.S. government liaison Everett Ross, allowing Killmonger to deal a fatal blow. Having defeated Black Panther in a ritual duel, Killmonger was crowned the new king of Wakanda, assuming the mantle of Black Panther.

5) Killmonger has the same powers as Black Panther

Traditionally, the superpowers that enabled T’Challa and his ancestral lineage of warriors to obtain Black Panther’s power came from a heart-shaped herb that imbues anyone who consumes it with enhanced physical capabilities. Anyone who attempts the eat the herb that is not of royal heritage will die from poisoning. Erik Killmonger attempted to eat the herb himself, and while he barely survived, his body manifested the same night vision, tracking, and physical endurance that T’Challa possesses.

In Marvel’s latest trailer for Black Panther, footage showed Killmonger donning his own suit that’s eerily similar to T’Challa’s. Killmonger’s version suit appears to have golden accents with a jaguar pattern on the mask. This suit seems to have similar powers to T’Challa’s, including a kind of cloaking device. In the comics, his uniform is also studded with spikes that inject poisons into his opponents, and his wristbands contain an energy blaster, according to Marvel.com.

7) Killmonger tried to join the Avengers

After assuming his role as Wakanda’s King and the new Black Panther, Killmonger sought out the Avengers in an attempt to join the superhero group. This was put to rest after a battle with Deadpool rendered Killmonger comatose and T’Challa returned to assume his leadership over Wakanda.

8) Killmonger has a pet leopard and zombies at his disposal

Throughout the comics, Killmonger is accompanied by a leopard named Preyy that serves as a weapon and his pet. The vengeful tactician also has a group of zombie-like soldiers known as the Death Regiments he created with the Altar of Resurrection.

As for his fate right now? IGN reports that Killmonger hasn’t been seen in the comics since 2008 Black Panther Vol. 4 #38 after he was purportedly killed by Black Panther after he orchestrated a war between Wakanda and Niganda. If his long-standing history in the comics says anything, it’s only a matter of time until he makes a return. It wouldn’t be surprising if the 2017 film revitalizes his character.