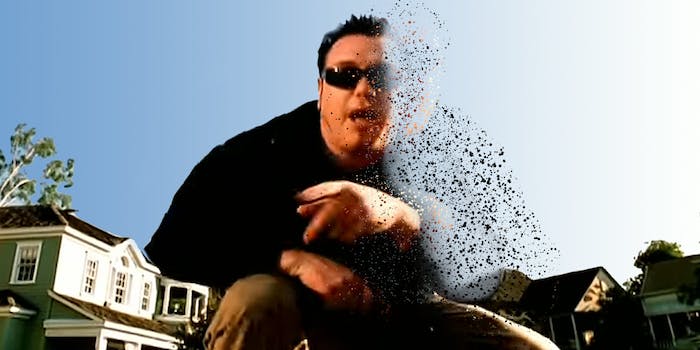 Everyone is disintegrating in this ‘Avengers: Infinity War’ meme

The internet is killing off pop culture regulars.

Avengers: Infinity War has now been out in theaters for several days. But some people haven’t had a chance to see it yet. We get it! However, this post will discuss an Infinity War meme that contains a spoiler for the movie. So if you don’t want to know anything about the movie, proceed with caution. This is our *only* spoiler warning.

Infinity War is an action-packed comic book movie with so many characters you might leave the theater without remembering everyone who starred in the film. There’s almost too much material for memes. Many of the jokes around Infinity War involve Thanos, the supervillain who seeks all six Infinity Stones over the course of the film. But one specific Infinity War meme is dominating the internet right now, and it involves making characters in pop culture turn into dust.

No, not Crash Bandicoot!

If you’ve seen Infinity War, you know why everyone is slowing turning into dust. It happens to several main characters at the end of the movie once Thanos collects all the stones and erases half of the population in the universe. Several of the memes that mimic the effect in the movie (using Photoshop tools) include the caption, “I don’t feel so good,” which is an emotional line uttered by one of the characters as he turns into dust. (I’m not crying. You’re crying.)

That one scene in #AvengersInfinityWar that had us all shook. “Mr. Stark, I don’t feel so good.” pic.twitter.com/PooBefxKI2

The ’90s-era Microsoft Windows logo predicted its own fate:

The Infinity War meme has endless uses; just pick an image and Photoshop it to make it look like the subject in it is slowly disintegrating. The internet was turning images of characters and people into dust for memes before Infinity War was released. According to Know Your Meme, “particle dispersion effect” memes took off a year ago. This meme just got another life, and we hope we’ll be able to say the same for several of the Marvel characters who turned into dust in Infinity War.