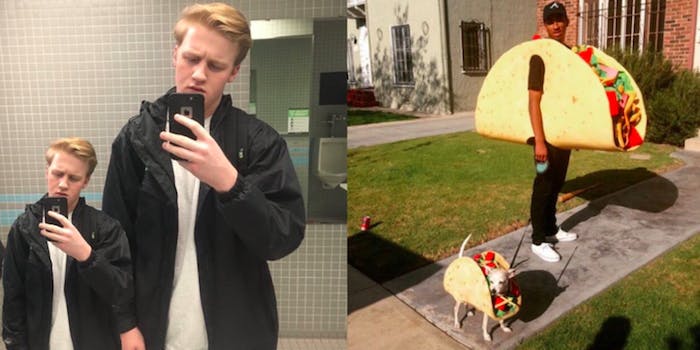 The Internet has one simple demand: ‘Don’t talk to me or my son ever again’

These are some defensive parents.

Parents don’t always get memes, but when the two mix, it’s typically comedic gold. Like when moms began figuring out what “Netflix and Chill” really meant—or when 2015 became the year of the Dad Joke.

Enter the latest trend: “Don’t talk to me or my son ever again.”

According to Know Your Meme, the punchline was originated in a 2014 post involving the anime Cowboy Bebop. Tumblr user splendidland uploaded an image of the character Spike Spiegel and a snack-size version of Spiegel with the words “don’t ever talk to me or my son ever again” superimposed in red font. (The character doesn’t have a kid in the series, but the idea is that this mini-me is the “son” in this context.)

Splendidland’s post did fine on Tumblr, racking up around 6,300 notes. A considerable success, but not what you would call viral.

Know Your Meme points out that the meme then laid low for a while, then made a comeback with help from Yoshi. A Tumblr post from konkeydongcountry in August 2015 featured two plush Yoshis, one larger than the other. This time the caption was “don’t you EVER talk to me or my son that way again”—tweaked slightly from the Cowboy Bebop post.

Soon after, in October, the meme trickled over to Twitter, retaining its new Yoshi motif. Twitter user @yoshibot posted a picture of a life-size Yoshi costume and a Photoshopped version that makes it look shorter. The caption better matched the Spiegel post, only differing by two words. “don’t you ever talk to me or my son again” adds in the “you” but omits the “ever.” All three incarnation have the same basic message but are linguistically just a smidge removed from one another.

don't you ever talk to me or my son again pic.twitter.com/a6zp2RkVvk

Since the Yoshi posts, a steady meme-mentum has built. As of February and March 2016, the meme has exploded in popularity all over Tumblr And Twitter, even making it to the elusive meme groups of Facebook.

The phase always seems to vary—but you get the point. The meme typically hinges on a “son” who is just a tinier copy of the parent, usually created through some sort of image editing. Many people have also simply turned themselves into the son. True mini-mes.

don't talk to me or my son ever again pic.twitter.com/fHC18TchcV

Don't talk to me or my son ever again pic.twitter.com/VsXsoOVVO1

But, like any good meme that takes over our dashboards and feeds, the idea mutates. Either people interpret it in a new light or find another way to exhibit the ethos of the meme. For example, people have started to find miniature versions of the parent IRL instead of editing the image.

"Don't talk to me or my son ever again" pic.twitter.com/BbCn93p3vo

Some have also found a way to poke a little fun at the subject of the picture they’re using. Case in point: identifying Justin Bieber as Ellen DeGeneres‘ son. He might not be physically smaller than the talk show host, but it totally looks like he’s descended from her lesbian lineage.

don't talk to me or my son ever again pic.twitter.com/bAjAJnc6MD

Another popular play on the meme features none other than Bernie Sanders and a pint-sized supporter so dedicated that he might as well be the presidential candidate’s son: Danny DeVito.

don't talk to me or my son ever again pic.twitter.com/OALhAZMIhH

There are also riffs where the bite-sized sons and their parent are deliciously hilarious.

There’s no way to quite predict how the meme might evolve next. What we do know is that there’s plenty of overprotective “parents” out there on the Internet right now, keeping their sons safe and sound.