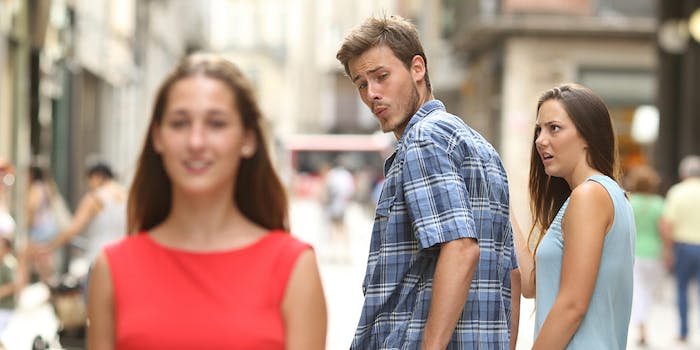 Why ‘distracted boyfriend’ is the meme of 2017

It's possibly the only meme with a whole fictional universe.

We all saw it shared dozens of times (or maybe hundreds, if you frequent social sites) in the last half of 2017. It inspired fanfiction and Halloween costumes and even this tip jar in NYC. The “distracted boyfriend” meme is like a plague that infected every part of the internet. The photo that launched the meme, and serves as its backdrop, shows a man obviously checking out another woman while walking down the street with his girlfriend, who looks at him in shock. The early versions of the meme made the man the central character (or you), while the woman walking by represented something catching your attention. The girlfriend represented the person or object you were ignoring while being distracted by someone (or something) else. It was a simple formula for a successful meme, and there’s a reason it worked.

The earliest known version of the distracted boyfriend meme was shared on a Turkish Facebook group page about prog rock in January 2017. Then, a few days later, someone posted it on Twitter and wrote, “this is maybe the best meme ive [sic] ever seen.”

But the meme didn’t really take off until several months later, in August. That’s when this version about socialism seducing young people made the rounds across the internet:

In the days leading up to the total solar eclipse on Aug. 21, the internet was filled with jokes about looking at the eclipse without proper eye protection. And this version of the distracted boyfriend meme went viral:

The “girlfriend” in the stock photo became the voice of reason in many versions of the meme.

Soon, there was a distracted boyfriend meme for seemingly everyone, from Star Wars fans to em-dash users.

these aren't even jokes this is deadass what happened pic.twitter.com/L15F8Ek9yC

Many memes become “uncool” after peaking, and people stop using them. But the distracted boyfriend meme gained a second life when the internet discovered that the photographer of the stock photo, Antonio Guillem, shot dozens of images involving the trio and archived them in an accessible online portfolio. This opened up a whole new world of meme-making.

i am on meme levels unheard of pic.twitter.com/WaGYcXweGg

The trove of available stock photos was used to illustrate why the boyfriend became distracted.

Now we know why this man became disloyal and distracted. from dankmemes

A new plot, shared on Twitter in November, told the story of the fictional couple’s tumultuous life together after the incident in the street.

Looking up stock photos for work and I think I found "distracted bf" girl. pic.twitter.com/pU4flzuLDT

After being blatantly disrespected by her bf on the streets, it looks like she is also having trouble with homework. pic.twitter.com/fi0gsecpgQ

Looks like she didn't learn her lesson and they're buying something expensive together. pic.twitter.com/BYwIB1NsDV

By the way, I'm not kidding here. There are 40+ pages of these two living their best/worst lives together. pic.twitter.com/MOyt5tpvTB

In an interview with New York magazine, Guillem said the original photo that led to the viral meme, and its many iterations, was shot in 2015 in Spain. “[W]e decided to take a few risks planning a session representing the infidelity concept in relationships in a playful and fun way,” he told the publication. He also said that he always works with the same models, which is why the couple appeared in so many of his stock photographs.

A lot of great memes helped us process everything that happened in 2017. But the distracted boyfriend meme’s range, unintentionally created by Guillem’s portfolio, set it apart from other popular internet content this year. A meme with a detailed backstory is rare; usually it’s a single image, video, or phrase that goes viral before fading out. This meme has an entire fantasy world with multiple plot twists. The story of the couple, and the people who distracted them, isn’t even depressing or terrible. It’s lighthearted and funny, and as digestible as a TV sitcom. Here’s hoping for more memes like the distracted boyfriend in 2018.