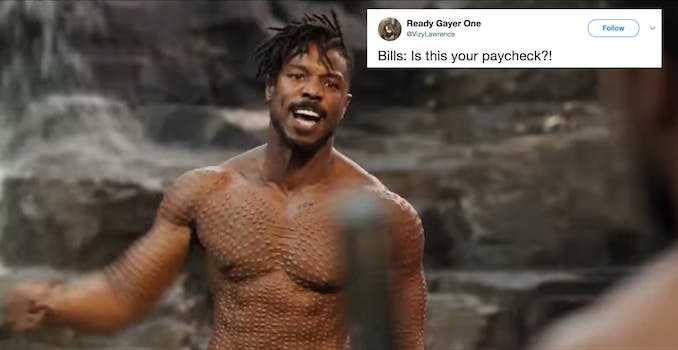 Use it when you're not impressed.

Black Panther opened in theaters more than a month ago, and the Marvel film is still inspiring great memes. The latest one is pulled from a line that villain Erik Killmonger (Michael B. Jordan) yells out to the people of Wakanda while battling T’Challa (Chadwick Boseman)—aka the Black Panther. “Is this your king?” he says as T’Challa keeps falling down.

Last week, on a snowy first day of Spring, someone turned the line into a clever pun, asking “Is this your Spring?” with a screengrab of Michael B. Jordan reciting the line.

People used that popular tweet to create a new Black Panther meme. The format is simple: Think of something (or someone) that you’re not impressed with, fill in the blank, and attach the screengrab. The person who isn’t impressed in this joke doesn’t even have to be you, or even a person for that matter—it can be a company, the bills you need to pay, or even your uterus.

Here are some of the best Killmonger “Is this your king?” memes from the last week:

Bills: Is this your paycheck?! pic.twitter.com/FbrhBzBAN4

Exam paper: Is this your brain?! pic.twitter.com/Q6qqDrIARf

My period: “Is this your uterus?” pic.twitter.com/JeKPxUunnv

Apple Music: Is this your last $9.99 before payday?! pic.twitter.com/quCRZ9Hiup

Is this your king?! pic.twitter.com/voW3HVweUR