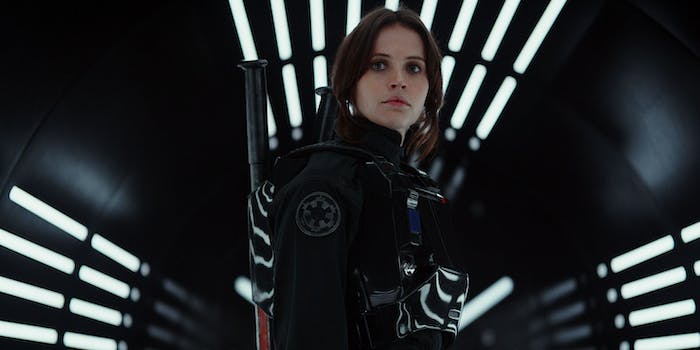 Tony Gilroy rewrote 'Rogue One' and reputedly took charge of the film's reshoots.

Amid reports of trouble behind the scenes of Solo: A Star Wars Story, Star Wars fans have seemingly forgotten that something similar happened to Rogue One. While the final product was well-received, Rogue One went through extensive reshoots that changed the original ending. In a new interview with The Moment With Brian Koppelman podcast, screenwriter Tony Gilroy recounted his experience of a film in “terrible, terrible trouble.”

While Disney didn’t outright replace Rogue One director Gareth Edwards like they did with the original Solo directors, Gilroy had a significant role in those reshoots. “I came in after the director’s cut,” said Gilroy. “I have a screenplay credit in the arbitration that was easily won.”

In complicated productions like this one, screenwriting credits are sometimes decided by arbitration from the Writer’s Guild, which checks through different versions of the script and decides who wrote a meaningful percentage of the final product. For instance, writer/director James Gunn tried to claim full credit for Guardians of the Galaxy, but after arbitration, Nicole Perlman still received a co-writer credit because she conceived and wrote the original screenplay. Tony Gilroy is credited as Rogue One‘s co-writer alongside Chris Weitz, meaning he changed at least 33 percent of the screenplay.

Gilroy has written a long string of thrillers and action movies, including the Bourne trilogy, earning dual Oscar nominations for writing and directing Michael Clayton. He reportedly directed most of Rogue One‘s reshoots.

“I’ve never been interested in Star Wars,” Gilroy said during the podcast interview. “So I had no reverence for it whatsoever. I was unafraid about that. And they were in such a swamp … they were in so much terrible, terrible trouble that all you could do was improve their position.” He explained that while the production was a “mess” when he stepped in, he found it “very, very simple to solve.” Why? Because at its heart, Rogue One concludes with a simple idea: everyone is going to die.

Of course, this is just Gilroy’s side of the story. He clearly had a significant role in crafting the final movie, but he was building on existing material. Disney chose to keep Gareth Edwards in the foreground of the film’s promotional tour, praising his direction and having him discuss his creative process, particularly his technical contributions to the franchise.

Fans knew about the reshoots and spotted discrepancies between the early trailers and the finished film. But in the end, they gave Rogue One a positive reception. Despite its troubled production, Rogue One wound up being far less controversial than The Last Jedi. And while the reshoots had a major impact, Solo is surely a more extreme situation. Ron Howard’s “reshoots” lasted long enough that he may have filmed a whole new movie. He will now receive full credit as director, while the original directors, Phil Lord and Chris Miller, are merely listed as executive producers.