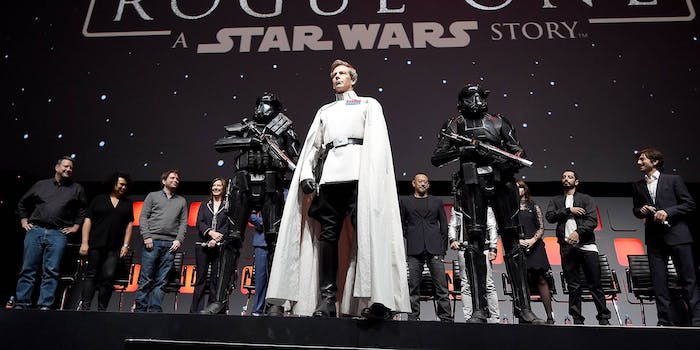 Watch all the panel highlights from Star Wars Celebration

Couldn't make it to Star Wars Celebration this weekend? We got you covered.

Star Wars Celebration was this year’s golden ticket for Star Wars fans, featuring a sneak peak at Rogue One, guest appearances from Mark Hamill and Carrie Fisher, and a slew of series filmmakers.

Rogue One‘s exclusive teaser trailer isn’t online yet (and may never be), but most of the other Celebration panels are already available. We’ve put together some of the highlights from the main stage and elsewhere.

With Rogue One coming out in just five months, this was obviously a headline panel for the convention. Fans queued overnight for a wristband and were rewarded with appearances from director Gareth Edwards and the entire main cast—including Ben Mendelsohn in costume as Director Krennic.

The full panel hasn’t been uploaded yet, but the above video includes 30 minutes of highlights. For a breakdown of everything we learned from this panel (including the sizzle reel of exciting behind-the-scenes Rogue One footage), check out our coverage from the convention.

The original Star Wars megastar opened Celebration on Friday morning, hosting a delightful Q&A that proved why he’s still so beloved after 40 years of fandom. He was strictly forbidden from revealing anything about Episode VIII, but this appearance was still very fun, and packed with tales from behind the scenes of the franchise.

Droids of The Force Awakens

This one is a must-watch for BB-8 fans.

Lucasfilm: The Art of Storytelling

This panel brought together a team of creative minds from Lucasfilm’s Story Group, Industrial Light and Magic, the new virtual-reality company ILMxLAB, Skywalker Sound, and Lucasfilm’s animation team. It wound up being one of the most illuminating panels of the convention, giving fans a look at the inner workings of the franchise.

Star Wars Rebels got a two-hour slot on the main stage, featuring some episode previews (which obviously aren’t online) and a panel about the show’s upcoming third season—including a new trailer. Showrunner Dave Filoni sure does know how to work a crowd! (For fans of Star Wars animation, we also recommend the “Ahsoka’s Untold Tales” panel.)

Most of the original Star Wars cast members are convention experts by now, but Fisher always takes her public appearances to the next level. Accompanied by her ever-present companion Gary Fisher the dog, her conversation with host Warwick Davis is as hilarious and bizarre as you’d expect.

Star Wars Celebration ended with an ensemble panel about the future of the franchise. It included directors Rian Johnson (Episode VIII); Phil Lord and Chris Miller (of the untitled Han Solo prequel); along with Mark Hamill, Carrie Fisher, and a surprise cameo from John Boyega.

They also brought 26-year-old Hail, Caesar! actor Alden Ehrenreich onstage to confirm what everyone already knew: He’s the new Han Solo. As with the Rogue One panel, only a half-hour cut has been posted so far.

Celebration had multiple stages running events at the same time, so these highlights only scrape the surface of what fans saw at the convention. For more footage, we recommend the official YouTube page, which is full of shorter interviews with stars on the convention floor.