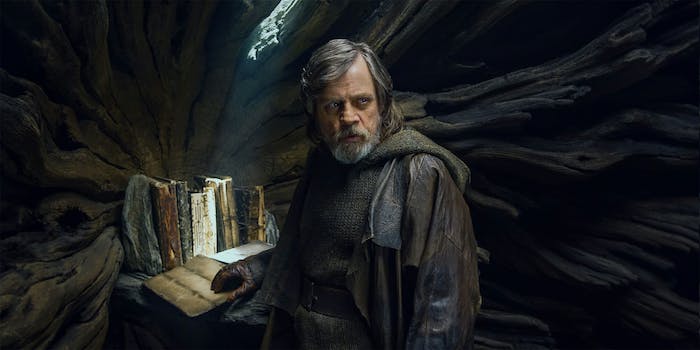 This review includes no significant spoilers for Star Wars: The Last Jedi.

In terms of franchise filmmaking, Star Wars requires an unusual lack of ego from new directors. Unlike superhero movies, where individualism is a strength (Logan; Thor: Ragnarok), no one wants to see a quirky Star Wars movie. Not in the main saga, anyway. The Last Jedi had to forge ahead with new ideas without straying too far from earlier films. In the hands of director Rian Johnson, The Last Jedi is dark but easily the funniest Star Wars movie to date, building on familiar themes with a powerfully lovable cast.

Continuing straight from The Force Awakens, our heroes aren’t as victorious as we hoped. The Resistance spends most of the film in retreat, fleeing the crushing grip of the First Order. In the Original Trilogy, the Rebel Alliance fighters were plucky underdogs, but they still had the backing of planetary leaders and a network of hidden bases. Now, Leia’s army appears tiny and alone in the galaxy. She mourns every loss, keenly aware that her team is shrinking and she could be next.

X-Wing pilot Poe Dameron is Leia’s chosen successor, although he’s not quite ready for command. Introduced as a delightfully simple hero in The Force Awakens, I couldn’t be happier with Poe’s new character development. His primary traits are handsomeness and dashing bravery, and The Last Jedi asks the question: What if he was too dashing? Poe just wants to grin rakishly while blowing up enemy ships, but as Leia points out, war isn’t all about straightforward heroism. This lesson arrives in the form of Vice Admiral Holdo (Laura Dern), a Resistance commander who becomes a foil for Poe’s charming but thoughtless courage.

Our new trio spends most of The Last Jedi apart, with Rey at an ancient Jedi temple with Luke Skywalker, and Finn befriending the adorably sincere yet tough Resistance engineer Rose Tico (Kelly Marie Tran). Like Finn, Rose is a footsoldier in a world of princesses, generals, and legends—but she still understands the war better than he does. Despite their separation, Finn and Rey are thematically linked by their energetic cluelessness, a welcome callback to Luke’s role as a foolish teenager in A New Hope. Luke has since matured into a cynical curmudgeon, following in the footsteps of Obi-Wan Kenobi’s flawed mentorship. Between Luke, Leia, and the diverse crew of soldiers in the Resistance, we get a realistic cross-section of a generation-long war.

Unlike Han Solo, who barely changed in 35 years, this aging Luke is a world away from the golden boy of the Rebel Alliance. Broken by Ben Solo’s defection to the Dark Side, he sees Rey’s untrained power as a threat rather than an opportunity. Yet some familiar notes shine through, like that trademark Skywalker bitchy humor, and the fact that Luke just spent the best part of a decade sulking. I mean, sure. He did have a reason to feel bad and move to a sad rainy island in the middle of nowhere. But you don’t see Leia moping around, do you?

It almost goes without saying that The Last Jedi is gorgeous to watch. Star Wars thrives on visual worldbuilding and symbolism, giving us a dual explanation for the film’s overwhelmingly red posters. The color obviously symbolizes the Dark Side, but also… there’s just a lot of red in this movie. One memorable setpiece involves Supreme Leader Snoke’s blood-red chamber (like all good supervillains, he’s into interior design); another is an action sequence where land-skimmers kick plumes of red dust from a salt flat. The casino planet of Canto Bight loomed large in Disney’s promotional campaign, but I suspect that’s because it’s a spoiler-free location. The best new locations are surprises, with an evocative role for Luke’s island home on Ahch-To.

The Jedi temple is a new spin on Yoda’s hermitage on Dagoba, a swamp whose natural energy was a direct opposite to the sterility of the Empire. Ahch-To is colder and more remote, yet gives us a clearer view of the Force. As Luke grudgingly shares his Jedi wisdom, Rey dives headfirst into her newfound power. We can’t be sure if she’s accessing the Dark or Light, inviting us to wonder if she’ll actually become a Jedi or a new kind of Force-using warrior.

The darkness and the light

Director Rian Johnson injected a healthy dose of unpredictability into The Last Jedi. Structurally speaking, it’s a 150-minute sequence of constant peril where the heroes take turns to rescue each other in the nick of time. There are dozens of scenes where the main characters stand on a knife’s edge between death and survival, more convincingly than your average Hollywood action scene. We know that they might die, although that’s not actually the most compelling concern. That honor goes to the relationship between Rey and Kylo Ren, the new protagonists of the Skywalker mythos. (And no, that’s not a spoiler about Rey’s parentage. I wouldn’t do that to you.)

Kylo Ren gets a lot of screentime in The Last Jedi, something that may inspire controversy among fans. The franchise previously relied on simple but effective villains, and some fans dislike the idea of Kylo Ren becoming “too sympathetic.” After watching The Last Jedi, these worries don’t hold water. The more character development Kylo Ren receives, the more hateable he becomes. Not because he’s awe-inspiringly evil like his idol Darth Vader, but because he’s pathetic and volatile in a deeply realistic way. He’s an angry man-child who wants to see the world burn, propped up by the infrastructure of the First Order. He and General Hux are catastrophically bad leaders, and wouldn’t last five minutes without a fleet of expensive ships and mindlessly loyal officers behind them. Some of the film’s biggest laughs come from Hux or Kylo giving stupid, rage-fuelled orders, with Domnhall Gleeson giving an apoplectic performance in the shrieking tradition of Eddie Redmayne in Jupiter Ascending.

With Luke and Anakin, we didn’t really wonder whether they’d follow the light or step into the dark. We knew the answer. That’s less true of Rey and Kylo Ren, whose destiny (or lack thereof) is more ambiguous. Kylo is torn by his incomplete submission to the Dark Side, while Rey is endangered by her hot-tempered nature and youthful naivety. As Luke haphazardly trains Rey in the ways of the Force, she’s secretly having psychic Skype sessions with Kylo Ren, each trying to convert the other to their side of the war. We can plausibly imagine either of them winning the argument, which makes for stressful viewing because we obviously don’t want Rey to succumb. And even the most ardent Kylo Ren hater must admit that Adam Driver’s performance is tremendous, expressing emotional vulnerability in a thoroughly toxic and manipulative way. He’s desperate for Rey to join him, but tries to do so by convincing her that she’s worthless and alone.

The Resistance hangs onto survival by pure desperation and last-ditch hope, wounded both by the First Order and by the stifling apathy that surrounds them. At one point they call out for help and no one comes. The First Order may be terrifying, but the Resistance’s secondary enemy is people who don’t care at all.

This mindset is embodied by “DJ” (Benicio Del Toro), a hacker recruited by Rose and Finn. He’s an unpleasant version of Han Solo: a cynical rogue who sees no difference between sides in the war. Arriving at a key moment in Finn’s story, he’s the equivalent of a temptation to the dark side. What if DJ is right? Finn already survived a lifetime of torment as a First Order soldier, and now he’s risking his life for a rebellion he barely understands. He just wants peace, and DJ’s apolitical stance represents an easy way out. Of course, we know Finn won’t take it; he loves Rey too much, and he’s a good person at heart. But you can see how a person like DJ grows out of the war, in the same way that Rose’s backstory explains her passionate dedication to the Resistance.

On opposite sides of the galaxy, Luke Skywalker and Kylo Ren are trying their damnedest to not care at all. Luke just wants the Jedi to die in peace, running away from his legacy as a mythic hero. Meanwhile, Kylo Ren desperately tries to convince himself (and Rey) that he’s erased his own past. Of course, Kylo’s brand of immature nihilism is patently nonsense. Despite being 30 years old, he’s like a teenager who screams and roars about how much he doesn’t care. He hypocritically criticizes Rey for wanting to know about her parents, when really, he’s more obsessed with the past than anyone else.

I noted down just two quotes while watching The Last Jedi. The first was a comment from one of the older characters, expressing how the new generation will learn to surpass them: “We are what they grow beyond.” The second was a delightful one-liner from Finn: “Let’s go, chrome-dome.” It’s the yin and yang of Star Wars. Rian Johnson understands how to balance the strengths of the franchise, which is simultaneously a fun action-comedy for kids, and a decades-long epic with meaty philosophical themes.