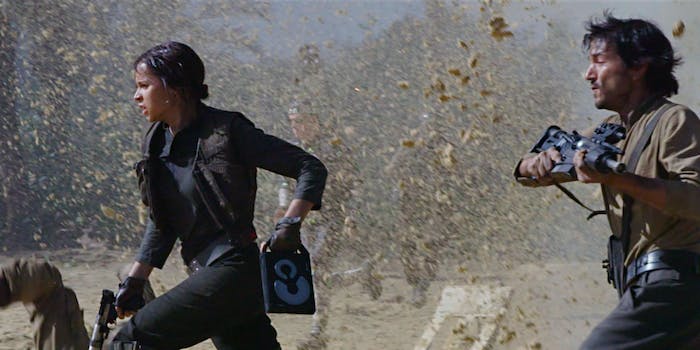 Fans already saw some deleted moments in the trailers, but they won't be on the Blu-ray.

Rogue One‘s home release includes plenty of special features, but no deleted scenes. This is notable because we saw so many deleted moments in the trailers, prompting a deluge of fan theories about alternate storylines.

So, where are those deleted scenes?

Speaking to Fandango, director Gareth Edwards explained why the film’s unused footage is unsuited to a traditional “deleted scenes” reel. “There’s not an individual scene that you can drag and drop and put on a Blu-ray. There are little things that would come and go during the process of post-production, but they’re not scenes.”

Instead of a more typical blockbuster process of closely following the original screenplay and storyboards, Rogue One changed significantly during the editing process. Edwards says it “incrementally evolved constantly through all of post-production and didn’t stop until there was a gun at our heads and we were forced to release the movie.

It’s no secret that Rogue One was reshaped by edits and reshoots. The film’s promotional materials even included images and clips from an alternate ending where Jyn, Cassian and K-2SO ended up on the beach after stealing the Death Star plans. This sequence will probably never see the light of day, because according to Edwards, they never completed its visual effects.

Gareth Edwards is in a weird position because so many people noticed the disparity between Rogue One‘s trailers and the finished product. With any other film, audiences would accept a simple refusal to include deleted scenes on the Blu-ray. But here, people are craving everything they were teased.

Star Wars fans will just have to make do with Rogue One‘s ever-expanding franchise of tie-in books and spinoffs.