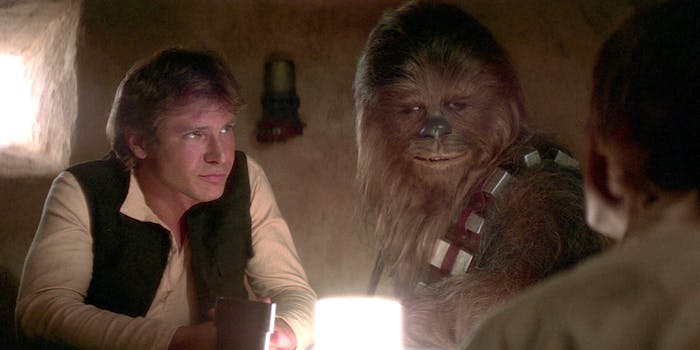 The directors were reportedly fired over creative differences.

Directors Phil Lord and Chris Miller (The Lego Movie) have left the Han Solo movie after four-and-a-half months of filming. According to reports from the Hollywood Reporter and Variety, they were fired.

The Hollywood Reporter broke the news on Tuesday evening, citing creative differences. “Unfortunately, our vision and process weren’t aligned with our partners on this project,” said LucasFilm president Kathleen Kennedy.

Barring personal emergencies like Zack Syder’s departure from Justice League, it’s extremely rare for directors to leave a project this late in the game. Usually when “creative differences” occur, someone drops out in the pre-production stage, like Patty Jenkins with Thor 2, or Edgar Wright with Ant-Man. Han Solo began filming on Jan. 30, so this announcement comes toward the end of their filming schedule. (For comparison, The Last Jedi took about five months to film.)

This news immediately set alarm bells ringing among Star Wars fans and the Hollywood press. Kennedy said that a new director “will be announced soon,” and it’s unclear how much of Han Solo will be re-shot, or whether the next director will just continue where Lord and Miller left off.

Within hours, Variety and THR reported that Lord and Miller were fired over conflicts with Kennedy and screenwriter Lawrence Kasdan (The Empire Strikes Back). According to their sources, the directors expected more creative freedom. Their comedic tone and improvisational methods supposedly clashed with Kennedy’s sensibilities and Kasdan’s idea of Han Solo as a cynical, selfish character. Disney and LucasFilm have a very specific vision for the Star Wars franchise, and it sounds like Lord and Miller weren’t toeing the line.

This isn’t the first time Star Wars has faced creative problems behind the scenes. Director Josh Trank left an untitled Star Wars spinoff in 2015, allegedly due to his work on Fantastic Four, which was eventually completed with help from other directors. Then Rogue One faced unusually extensive reshoots last year, with Tony Gilroy stepping in after Gareth Edwards wrapped principal photography.

Coupled with similar examples like Ant-Man, this paints an awkward picture of Hollywood’s blockbuster production line. Studios either hire inexperienced directors and risk sub-par material, or they hire more experienced filmmakers who balk at the studio’s desire for creative control.

Han Solo is still scheduled for release in May 2018.