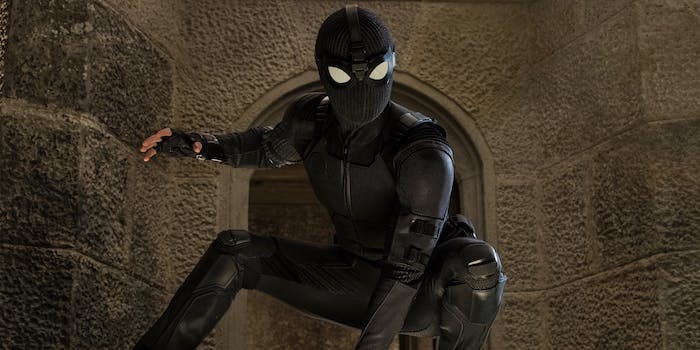 The webs that link ‘Spider-Man: Far From Home’ with the MCU and other ‘Spider-Man’ stories

There's a lot more than meets the eye.

Spider-Man: Far From Home provided a largely light-hearted salve to a very bittersweet Avengers: Endgame. But to tell its story, it reaches to the far ends of the Marvel universe.

The most obvious ties that link Far From Home to a bigger world are two of Peter Parker’s previous appearances: Spider-Man: Homecoming, which introduced us to MCU Peter Parker’s world and most of his classmates, and Avengers: Endgame because of, well, everything that happened in Endgame including Iron Man’s death in the end.

Even though Far From Home is supposed to be the final movie of Phase 3, that doesn’t mean there aren’t even more links to the past, along with clues as to what might lay ahead. There are plenty of visual callbacks, echoes of plots from other properties, and even one character’s Marvel film comeback. While some might not take up more than a few seconds of screentime, such as the initials on Parker’s suitcase that once belonged to Uncle Ben, others have much, much larger implications.

Honoring the Avengers who are gone (but not forgotten)

One of the criticisms surrounding Endgame was that as much as it honored Tony Stark after his death, it did so at the expense of Black Widow, the other Avenger who died in Endgame and was basically put on the backburner. Fortunately, the students at Midtown School of Science and Technology did their due diligence to honor the fallen.

After the film’s cold open introducing us to Mysterio in Mexico, we’re subjected to a very earnest (and quite bad) tribute video for the Avengers who met their end in Avengers: Infinity War and Endgame. Chief among them are Black Widow, Vision, Iron Man, and Captain America. The inclusion of Cap is particularly interesting, given that some version of Steve Rogers was definitely still alive the last time we saw him in Endgame. He stayed in the past, which may or may not have created a new timeline (the writers and directors couldn’t agree on what happened), before a much older Rogers showed up to give Sam Wilson Cap’s shield.

Does this confirm that the Rogers we met died? It’s unclear. The version of Captain America in Midtown’s tribute video is the young version we’ve seen in just about every other Marvel movie and knowledge of an aged Rogers is probably limited to a few people. What likely happened is that, instead of informing the public that time travel was now possible, it was probably much easier just to tell them that Captain America died after the Blip brought everyone back.

To top it all off, the tribute video is set to Whitney Houston’s rendition of “I Will Always Love You” and includes a watermarked Getty image at the end. They really did put their whole heart into it.

Right after Midtown’s tribute video airs on the school’s newscast, the anchors are quick to let the audience know (and remind their classmates) what happened with the rest of the world. What we’ve been calling the Snap for more than a year, Far From Home has called “The Blip”: They didn’t know that a Mad Titan literally snapped half the universe out of existence, just that one day, half the world disappeared, and five years later, they came back. According to the Russo brothers, the Hulk had enough wherewithal to make sure that people wouldn’t be in danger when they were brought back.

But a few things demonstrate that things are very different in the MCU. Those who were snapped out existence didn’t age while their surviving siblings did, which led to some younger siblings now being biologically older than their older siblings. Brad Davis, Parker’s classmate who becomes something of a new rival, is one such example of someone who aged up while a flight attendant takes away a glass of sparkling wine from Flash Thompson on the airplane after MJ points out that Flash was blipped (and is still 16, not 21). Many people who returned are now homeless after others are living in their homes.

That leads Aunt May and Parker both working with with a charity to help those who’d been displaced by the Blip, which more recently echoes May’s role at F.E.A.S.T. in Insomniac Games’ Spider-Man.

The eventual potential of the multiverse

In Venice, we’re introduced to Quentin Beck, a masked superhero who made waves by defeating one of the Elementals. We later learn that it’s all an illusion created by Mysterio and his cronies (more on them later), but initially, Mysterio says that his name is Quentin Beck and that the Elementals destroyed his dimension.

“There are multiple realities, Peter,” Mysterio tells him. “This is Earth Dimension 616. I’m from Earth-833. We share identical physical constants, level four symmetry.”

“There are multiple realities, Peter. This is Earth Dimension 616, I’m from Earth 833. We share identical physical constants, level four symmetry”#SpiderManFarFromHome
(Via @LightsCameraPod)pic.twitter.com/3N6IxU2iLi

Mysterio later laughs at how easily Peter, Nick Fury, and Maria Hill believed him. With the latter two, it was because they were actually Skrulls in disguise. But Peter, who already had some thoughts about the multiverse and was vulnerable enough to let in a new mentor, bought it right up.

Granted, we’re still no closer to knowing whether there is actually a multiverse in the MCU since Mysterio is a big liar—although if Marvel wanted to throw it in the mix, we know that it could very well work. (Visually speaking, some of Spider-Man and Mysterio’s fights later in the film even call back to Into the Spider-Verse a bit.) But Far From Home didn’t pull Earth-833 out of thin air: Earth-833 exists in the comics, which used to be home to William Braddock, a.k.a. Spider-UK, but no longer exists. And perhaps not so coincidentally, the final battle in Far From Home takes place in the U.K., right in the middle of London.

Many of Parker’s most famous villains, both in the comics and the previous takes on Spider-Man, aren’t necessarily superpowered. Neither are the two major villains he faces in his own MCU films, the Vulture and Mysterio. But they do have something in common besides an ultimate wish to kill Parker: they were both professionally scorned by Tony Stark.

In Homecoming, Adrian Toomes owned a salvage company that was initially hired to clean up after the Battle of New York, but they were soon let go so that Stark’s company could clean it up instead. Mysterio used to work at Stark Industries and helped create the Binarily Augmented Retro-Framing technology that allowed Tony to revisit some of his older memories. We saw how that scene played out at the beginning of Captain America: Civil War, but Mysterio was never part of the original scene; he is now, thanks to some editing.

Because he felt he didn’t get enough credit, hated how Tony used his technological innovation (Tony even named it B.A.R.F.), and demanded more attention, he was fired. Soon enough, he was joined by several other disgruntled employees.

Even after his death, Stark’s actions in life put those he cared about in danger.

Although Mysterio didn’t appear in a previous Marvel film before the big reveal that he was working against Parker, another person did: William Ginter Riva. You might not remember his name, but he’s the scientist in the first Iron Man film who told Jebediah Stane that the technology to power Stark’s first Iron Man suit was impossible.

And yes, that scene is actually in Iron Man—and it’s with Peter Billingsley, who fans know best as Ralphie in A Christmas Story.

Can Peter take a selfie? Why yes he can!

Toward the end of Far From Home, as Peter’s about to meet MJ to give her a friendly neighborhood Spider-Man tour of New York City, he uses his phone to take a selfie. It’s a nice nod to a feature in Spider-Man PS4 that allows an older Peter to do the same as he’s exploring Manhattan, allowing him to take photos everywhere from famous landmarks to Uncle Ben’s grave. (Yes, really.) He can also perch up on top of a street sign, a move that video game Peter does whenever he’s surveying the city around him.

We’re not quite sure what Peter planned to do with the photo before pundit J. Jonah Jameson (who is played by J.K. Simmons, reprising his role from the Sam Raimi Spider-Man trilogy) reveals Peter’s identity to the world. But hey, it’s a very cool shot.

The Skrulls hiding in plain sight

The second Far From Home post-credits scene reveals that Fury and Hill are actually the Skrulls Talos and Soren (first introduced in Captain Marvel) in disguise, charged by Fury himself to keep an eye on Parker while he’s observing the construction of a space ship. But could this mean there are other Skrulls hiding in our midst?

Probably not. Well, not until there’s a plot reason for them to be there.