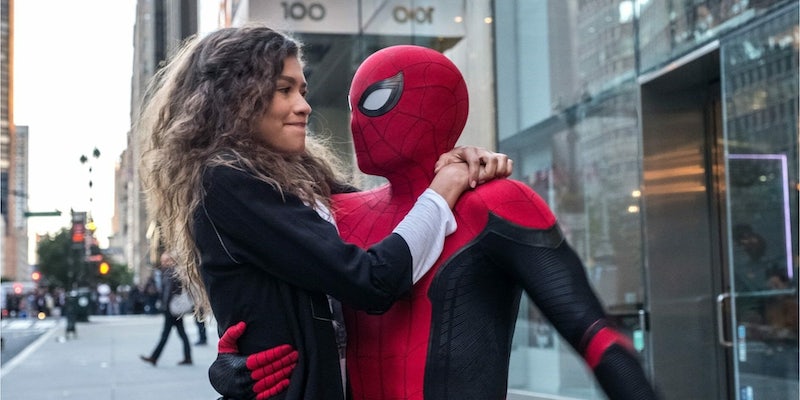 ‘Spider-Man: Far From Home’ is a hilarious teen comedy with a great villain

Peter Parker returns for a charming film that features a clever reimagining of Marvel's Mysterio.

Following the carnage of Avengers: Endgame, Spider-Man: Far From Home resets the tone for a goofy teen comedy. Quickly acknowledging and then moving on from Endgame’s five-year time jump (now known as “the Blip”), Peter Parker (Tom Holland) sets off on a school trip around Europe. He just wants to have a fun vacation and hopefully kiss his friend MJ (Zendaya), but his double life inevitably intervenes.

RELEASE DATE: 7/2/2019
DIRECTOR: Jon Watts
Spidey’s back to sling webs and save the day.

A squad of monsters called the Elementals have emerged from another dimension, locked in an epic struggle with a new hero called Mysterio (Jake Gyllenhaal). Since Peter is conveniently in Venice when a water Elemental attacks, Nick Fury (Samuel L. Jackson) suggests they team up. It’s a very familiar (dare I say stale) superhero set-up, rescued by two factors: There’s a very welcome plot twist halfway through, and the action scenes are much more imaginative than usual. When it comes to visual trickery, Far From Home delivers the psychedelic weirdness that Doctor Strange was meant to achieve.

The late, great Tony Stark looms large in Far From Home, both as Peter’s mentor and as a public figure. Like Homecoming, the plot hinges on the fallout from one of Tony’s attempts to protect the world—in this case, a satellite drone weapon that he bequeaths to Peter. (In other words, an idea that bears a strong resemblance to Project Insight in Captain America: The Winter Soldier, and Tony’s army of drone suits in Iron Man 3.) There are a couple of ways to look at this. On the one hand, Peter’s grief does feel organic, because he and Tony Stark had a mentor/mentee relationship since Holland’s debut in Civil War. It’s also very consistent for Tony to give a WMD to a 16-year-old with no thought for the consequences.

On the other hand, the amount of Stark-related content here—even after his death!—is almost overpowering. These films have created an unbreakable link between Spidey and Iron Man—a strategy that you could cynically read as insurance against Sony taking Spider-Man back from Disney. Rather than letting Peter be a solo hero, the MCU constantly emphasizes his role as Tony’s protégé, giving him Iron Man-style suits and weapons, and bringing back Happy Hogan (Jon Favreau) as his sidekick. Tony’s death makes Peter idolize him even more, tying himself in knots about whether he’s worthy to be Iron Man’s successor. The obvious answer should be that Peter is his own person, but the film doesn’t really drive that point home.

One of Far From Home‘s neatest tricks is tackling Peter’s grief while maintaining an otherwise lighthearted tone. Holland and his young co-stars all give hilarious, characterful performances as their vacation dissolves into chaos. Since Marvel often relies on a static casting formula of hero, love-interest, sidekick, mentor, and villain, it’s refreshing to see so many civilian supporting characters—which is, of course, perfect for Spider-Man. His stories should always be an equal split between superheroism and Peter’s personal life, and here we get plenty of screentime for his teenage friends and priorities. Zendaya and Jacob Batalon (Peter’s BFF Ned Leeds) are especially entertaining, with MJ characterized as a morbid, Daria-like weirdo—a delightfully unconventional love-interest role.

Now it’s time to talk about Mysterio, so if you don’t want any spoilers, stop reading now. Although if you’re familiar with the comics, you’ll already know the deal.

In the comics, Mysterio is one of Spider-Man’s recurring foes, a villain who relies on stagecraft and manipulation to give himself fake superpowers. Far From Home slyly introduces him as a hero from another dimension (think Into the Spider-Verse), positioning him as Peter’s new mentor. Backed by Nick Fury and wearing a costume that looks intentionally similar to Thor’s, he exudes authority compared to Peter’s teenage insecurity. It’s all too easy for Peter to take a step back and let him save the world instead—except, of course, Mysterio is a fraud. His powers are an illusion, which is where the film’s most interesting action sequences come in. A significant step up from the kaleidoscope effects of Doctor Strange, Mysterio’s illusions create trippy sequences that reflect the art of Silver Age comics, utilizing Peter’s inner turmoil and the kinetic appeal of Spidey’s athletic abilities.

Most superhero movies hire A-list actors to inject more personality into mediocre villains, so it’s surprising to see the opposite happen here. Like the Vulture in Spider-Man: Homecoming, Mysterio is a clever reimagining of an old supervillain—but oddly enough, Gyllenhaal’s performance is less exciting than the character’s overall concept. Mysterio just isn’t as charismatic or theatrical as he should be, paling in comparison to the wild performances we saw from Gyllenhaal in Nightcrawler, Okja, and Velvet Buzzsaw. And it’s not as if he had nothing to work with. Mysterio’s illusions work as a self-referential commentary on Marvel’s addiction to CGI action scenes, and screenwriters Chris McKenna and Erik Sommers draw a line between his con artistry and the spread of fake news. In the wake of Avengers: Endgame, everyone is so used to apocalyptic chaos that they just take Mysterio’s lies at face value.

After a month of sloppy, subpar summer blockbusters, Spider-Man: Far From Home is a relief. Holland, Zendaya, and their classmates shine in a lively, laugh-out-loud teen comedy, which feels like the right choice after the weightiness of Avengers: Endgame. Instead of explaining the more serious fallout of Endgame’s time jump, they can just handwave it with a joke. I won’t over-egg things by claiming this is a major highlight of the franchise, but it’s a thoroughly fun experience, with a charming cast, a well-written villain, and (for once) some genuinely original action scenes.