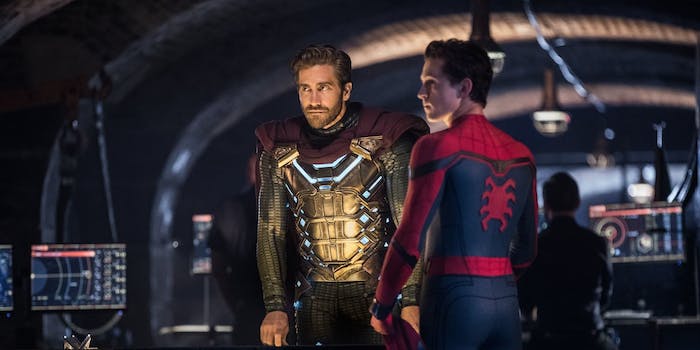 The true villain of ‘Spider-Man: Far From Home’ is fake news

This update on the classic Marvel character was more political than we expected.

The Spider-Man franchise is on a roll when it comes to supervillains. Homecoming’s rebooted Vulture (Michael Keaton) was a regular guy with a plausible backstory: a small business owner who lost his livelihood after Tony Stark replaced him with a government contractor.

Zooming in on the civilian impact of big superhero battles, his role was a rare look at everyday life in the MCU. Far From Home did something similar with Mysterio, another vintage Spider-Man villain who gets a contemporary makeover and a Stark-related motivation. Both characters are now rooted in a realistic setting, but crucially, neither film goes the dark-and-gritty route to do so.

In the comics, Mysterio is a former special effects technician who uses gadgets and mind control to create the illusion of superpowers. Jake Gyllenhaal’s version revamps this idea with an MCU origin story, positioning him as a disgruntled Stark Industries engineer whose invention (basically Star Trek’s holodeck) was co-copted by his boss Tony Stark. Rewinding the clock to Captain America: Civil War, we see Tony give this groundbreaking technology a stupid name (B.A.R.F.) and use it as a personal therapy device.

Teaming up with other embittered Stark employees, Mysterio uses drones and hologram projectors to create fake monsters to “defeat” in public battles, setting himself up as a successor to the Avengers.

At the risk of using a stale old buzzword, Far From Home is absolutely about fake news. Mysterio barely needs to prove that he’s a superhero from another dimension, he just shows up looking the part. Wearing a costume that combines an Asgardian cape with a retrofuturistic bubble helmet, his appearance encourages people to believe that he’s superhuman. Throw in some offhand remarks about the Elementals killing his family, and everyone just takes his story at face value.

Mysterio arrives at precisely the right time for this story to work, both in the MCU and in real life. Ten years on from the Battle of New York, people in the MCU are so inured to flashy heroes and apocalyptic threats that an armored Doctor Strange knockoff no longer seems weird. No one bothers to fact-check because hey, it feels right. It’s the same mindset that leads people to retweet wildly fake news stories with a cynical handwave of “hey, it’s 2019.”

Mysterio and his team succeed because they keep Spider-Man and Nick Fury on their toes, relying on people’s fear and trauma to stop them thinking too much. In the aftermath of Avengers: Endgame, everyone is so scared of another attack, they’ll take any help they can get. The one thing that feels slightly dubious is Nick Fury’s credulity, which is where the film’s post-credits scenes come in. Instead of just teasing an upcoming movie, they add something meaningful to the story.

First, we see Mysterio get the last laugh, unmasking Peter Parker with a misleading video from their final battle. His message arrives courtesy of J. Jonah Jameson as a blowhard TV pundit, revamping J.K. Simmons’ earlier depiction of Jameson as a tabloid editor. Spider-Man has always had trouble with bad press, but this update feels more urgent than before. Contemporary viewers understand how fast things can go wrong if a fake news story goes viral, and Mysterio’s final gambit is scarily convincing.

Given the number of MCU heroes who have publicly switched sides (not to mention the hard-to-explain feud of Civil War), why wouldn’t people believe that Spider-Man suddenly became a villain? And how is the naive, socially awkward Peter Parker meant to handle this kind of media blitz?

Finally, there’s the big reveal with Nick Fury, which ties up what might have been a lingering problem with the Mysterio story. Since Fury is famously paranoid, it doesn’t seem quite fair that he falls for Mysterio’s schtick.

However, it makes a lot more sense if Fury is actually a Skrull in disguise, with Talos (Ben Mendelsohn) filling in while Fury takes a vacation in space. Instead of going up against the Avengers A-team, Mysterio only had to fool two aliens and a gullible teenage boy.