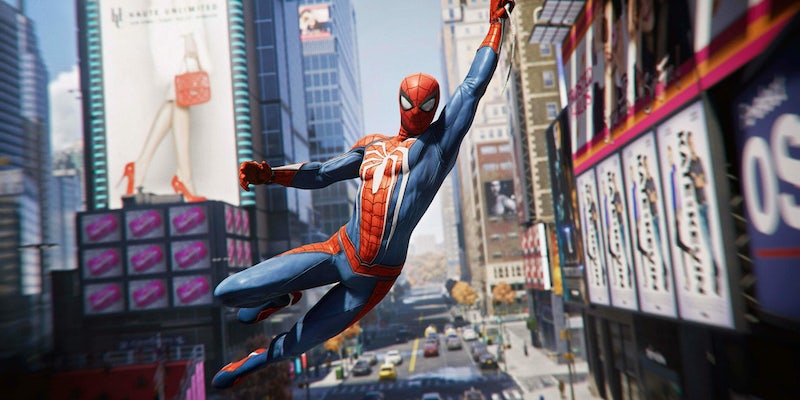 The best Spider-Man story ever lands on PS4

Thanks to an obvious love for the source material and an understanding of what makes the hero great, Insomniac Games has told one of the best Spider-Man stories of all time.

I wouldn’t be surprised to learn that “with great power comes great responsibility” was the guiding principle at Insomniac Games during Spider-Man’s development. In taking on the superhuman task of developing this iconic hero’s biggest game ever, the studio also tackles the legacy of Spider-Man’s past, both good and bad.

This latest adventure arrives under the burden of immense expectations. Fans demand an open-world experience with great traversal mechanics, free-swinging action, and an all-star cast of comic book characters. Between the weight of anticipation and the failures of previous entries, it almost feels like fighting a losing battle to aim for an original, authentic Spider-Man story.

But Insomniac has far surpassed anything I could have hoped for from an open-world Spider-Man title.

From the opening cutscene, the game’s intended tone is obvious. Peter Parker is an experienced hero, and after eight years on the job, suiting up as the webslinger comes as naturally as waking up each morning. Like the best Spider-Man narratives, this story deals with the hero and the man behind the mask in equal measure. We see Peter failing to make rent, constantly missing work, and still reeling from his breakup with Mary Jane Watson.

The first time Spider-Man dives out the window of his Lower East Side apartment, the sunny skyline of New York rolls out before the player’s eyes. But this isn’t some open world packed with meaningless distractions. Each building is purposefully placed, and the busy streets feel vividly alive with commotion. Peter slyly quips about another day on the job and zips off toward the crime in progress.

In an inspired design fundamental, Insomniac smartly avoids a potentially tepid walk-and-talk intro and makes mastering how to move in the open air the first thing players do. After all, it’s what almost everyone will want to try first immediately after the title screen fades.

Organically, on-screen prompts introduce the basic mechanics of soaring between rooftops. By gently guiding the control stick, the player subtly shifts Spider-Man’s swing between vantage points. Holding down the right trigger tethers you to a highlighted object, while adding pressure to the left snaps the character quickly to an incoming target. By layering acrobatic dives and leaps, one can set the pace for how freely they choose to vault between objectives.

This gameplay doesn’t just let you pretend you’re a friendly neighborhood hero; you truly step into Spider-Man’s suit like never before.

In many ways, an open-world Spider-Man lives or dies by its free-roaming mechanics. If New York feels either empty or exhaustive, there’s no intrinsic motivation to get out and explore, and thus, no reason for Spidey to save the day. Not only is this city crafted in laboriously lavish detail, it is so densely populated with meaningful activities that you can’t help but love the overwhelming scope of it all.

Storywise, though, the game’s opening hour does throw a lot at players. Introducing key characters in a lightning-fast fashion, systems and story beats are passed over so quickly that it almost feels disorienting. Moving between swinging to combat to stealth to research to crafting and upgrade menus, I felt as exhausted as poor Peter himself.

Thankfully, after an explosive opening, Spider-Man reveals itself as a well-paced experience that respects players’ time.

Fans of open-world games should know what expect when it comes to the bulk of activities. The map is littered with enemy hideouts, time-trial challenges, and dozens of hidden Easter eggs to collect. As you zip around the skies, crime breaks out organically, adding even more to do.

To say there is always something to do in Spider-Man’s world is putting it lightly. If a flashy new costume doesn’t drive you to put some work in, an intriguing story beat or helpful upgrade should do the trick.  The city is full of surprises, and they all work toward furthering the player’s progression and growth as an experienced hero.

At any given moment, Spider-Man can tackle a staggering number of different responsibilities, but he’s never limited to a single objective. There are lulls in the course of the main story that allow for patrols, encouraging you to explore and check off a few outstanding missions before moving forward. Every action, from collecting stashed backpacks to acing an environmental puzzle, grants various tokens that can be used to unlock new suits, gadgets, and skills.

Even the slightest enhancements can drastically change combat encounters. For example, learning how to pull pistols from the hands of armed foes speeds up basic combos. As enemies’ equipment gets stronger, the skill tree branches out, allowing you to rip away rifles and throw them back at their previous owner.

Spider-Man’s unique advantages are brilliantly realized in moment-to-moment gameplay. You’ll need to capitalize on Spidey’s powers to stand a chance in fights, but there’s still that same soaring sense of freedom present in swinging around the city. The vast repertoire of tools available to players allows for creative solutions to the toughest brawls.

Thanks to a wheel full of gadgets, it’s easy to keep an open mind in new scenarios. Electric webbing can stun larger baddies, while a deployed drone makes it easy to cut through a wave of oncoming soldiers. By wrapping up advancing enemies, you can control dense crowds and change the course of any encounter. Combined with unlockable suit powers and skills, the tangible progression of new mechanics is sustained up until the final boss battle.

Throwing punches on the ground is one thing, but getting an enemy airborne opens up another entirely different strategy. Spider-Man can throw objects in the map as a distraction and jump up for a valuable vantage point. He can even yank enemies with him, rendering them incapable of attacking in the air. I often relied on sending my target reeling with a heavy combo, only to slam them down on their allies seconds later. The lightweight nature of Spidey’s spry figure makes Insomniac’s combat remarkably more fluid than any contemporary character action game.

Dodging is another technique required in almost every battle. Peter’s Spider-Sense is visualized as a trigger over the player’s head, prompting the opportunity to dive out of harm’s way and open a small window for a devastating counter-strike. Bulkier enemies and those with shields are more vulnerable to dodge attacks, but by the time of their introduction, the player should have memorized the proper reaction.

What once seemed like a dizzying list of combos and combat moves becomes second nature after a few hours, and that natural learning curve is present every step of the way in this lengthy adventure. Over time, the city opens up in response to story beats, adding new types of challenges to conquer. Despite some difficult encounters and lofty goals, I never felt unprepared for what Spider-Man threw at me.

Surprisingly, the frequent stealth sections are wonderful as well. Crawling on walls, hanging from the ceiling, and dropping down on unsuspecting criminals is remarkably rewarding and never feels forced. Some of the most memorable sections of the story focus on such tense stakeouts, making clever use of Spider-Man’s skills (or lack thereof).

If anything is disappointing about the core of the game, it’s the repetitive nature of some missions. Such a feeling is to be expected when clearing out so many similar objectives in rapid succession, but even some boss fights that deserved more weight falter to a generic structure. While some fans were worried about an overuse of quick-time events for combat prompts, these moments are mostly saved for the most cinematic opportunity, breaking up the occasional sense of slight recurrence.

Likewise, most of the authored side missions are disappointingly devoid of clever writing. When you aren’t clearing out a hive of nameless enemies, you’re solving problems for locals or working uncomfortably closely with the authorities. Frankly, a lot of the tasks that Spider-Man takes on feel more suited for a police officer than a friendly vigilante. Stories that involve stalking a supposed cheater or profiling potential gang members just feel misplaced in the otherwise sunny profile of a cheerful hero.

Overall, the central story perfectly presents the drama of being Spider-Man. Yuri Lowenthal deserves immense praise for his portrayal of the titular web-slinger, as his delivery of both Peter and Spider-Man is on par with any of his big-screen counterparts. The ensemble cast earns equal adulation, as emotional moments hit with all intended weight, thanks to evocative acting and some stellar cinematic direction.

When he finally takes down a notorious villain, our hero finds the city subject to a mysterious conspiracy that has even his deadliest rivals fear. This narrative juggles tension between Peter’s spiraling social life and the escalation of danger in New York with ease, always barreling forward at a breakneck pace.

If you’re familiar with comics lore, there are a handful of teases that should illuminate your understanding of the larger universe in which this game is set. However, it’s easy to guess where some character’s arcs will end up even from the opening moments of the story. These twists are executed masterfully, but too many of them are predictable. Where games like Telltale’s Batman and Arkham City took big narrative risks that played with fans’ expectations, Marvel’s Spider-Man settles for a safe but entertaining arc. And while buildings like Avengers Tower and the Sanctum Santorum are present, don’t expect any bigger tie-ins. This is not an Avengers game, and I’m glad the developers chose to keep this installment so grounded in the Spider-Man mythos.

Every prominent character featured comes across as a natural fit for the world Insomniac have built, as well as Marvel’s detailed history. In a similar way, this feels like the most authentic Spider-Man game that’s ever been made. It captures every aspect of the hero and his secret identity that fans have come to love, all while delivering a lengthy experience that feels like a childhood dream of defying gravity finally come to fruition.

This review was published based on a copy of the game provided by the publisher. Spider-Man releases exclusively for PS4 on Sept. 7.