Jake Gyllenhaal's character Mysterio says he's from another universe. Why do fans believe him?

The Spider-Man: Far From Home trailer prompted a lot of excitement, and not just because it shows the aftermath of Avengers: Endgame. With Sony planning to expand its Spidey franchise, this installment seemingly teases a connected multiverse like we saw in Spider-Man: Into the Spider-Verse. Jake Gyllenhaal’s character Mysterio says he’s from another dimension, prompting speculation about crossovers. However, a lot of fans are ignoring a key detail here: Mysterio is a notorious liar. Here’s everything you need to know about the infamous Spidey bad guy.

In the comics, Mysterio is a great big fraud. In fact, Mysterio—aka Quentin Beck —began his career as a special effects technician. After teaming up with a C-list supervillain, he decided to use visual effects trickery to make it look like he had superpowers himself. He commits some crimes while pretending to be Spider-Man, then introduces himself in his new Mysterio costume, framed as a heroic replacement for the wrongly-accused Spidey. 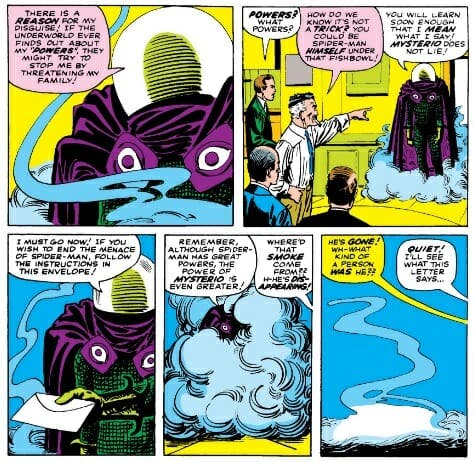 Mysterio’s later appearances involve more elaborate plots—including some darker storylines that belie his goofy appearance—but the common thread is that he’s a con artist. Depicted as a glorified stage magician, he uses a combination of misdirection and technology to get money or revenge. He’s also known to employ hypnotism and mind-altering substances, which could explain how he manages to convince the notoriously cynical Nick Fury in Spider-Man: Far From Home.

In the trailer, Fury says that Mysterio is from a parallel Earth, explaining that “the Snap tore a hole in our dimension.” Mysterio is essentially introduced as Peter’s new mentor, a hero who needs help defeating monsters from another universe. Peter even drops the word “multiverse,” inviting fans to speculate about future Spider-Man crossovers.

As for Mysterio’s persona, it’s flashy, to say the least. You’ve got the handsome and charismatic Jake Gyllenhall decked out in shiny armor and a flowing cape, complete with a goofy helmet and some kind of superpower involving green smoke. Definitely a theatrical entrance.

Considering his comic book origins (and the fact that there’s no other major villain in Far From Home’s cast list), we can safely assume that Mysterio isn’t actually a new ally from another dimension. This is, however, a really fun way to introduce the character—and plenty of viewers will surely be surprised by the twist.