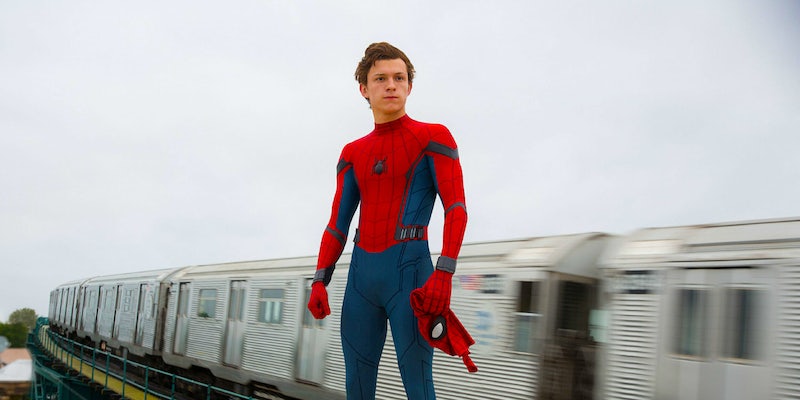 Tom Holland is perfectly cast as Peter Parker, in the best movie of Marvel's Phase Three.

There’s a running joke in Spider-Man: Homecoming where Peter Parker desperately tries to join the Avengers, only to be rebuffed by Tony Stark. It mirrors Sony’s keenness to join the Marvel Cinematic Universe, and it could easily have backfired, positioning Spider-Man as an outsider to the big leagues.

Fortunately, Homecoming outstrips most of the recent MCU movies. It’s also better integrated into the franchise, with meaningful continuity instead of shallow callbacks. Peter Parker is a kid who grew up in a world of superheroes, in a story that develops organically from the post-Avengers zeitgeist.

Skipping his origin story (thank god), Homecoming introduces Peter as a sophomore at a competitive academic school—arguably borrowing Miles Morales’ role from the Ultimate Spider-Man comics. He even has a version of Miles’ Lego-obsessed best friend, renamed as Ned Leeds (Jacob Batalon) for the movie. It’s a teen comedy at heart, a refreshing change from the 30- and 40-something heroes of most superhero movies—and an ideal choice for Tom Holland’s youthful energy. He has the necessary physicality for Spider-Man (he’s a great dancer, and his party trick is doing backflips), coupled with sensitivity and great comic timing. And unlike Andrew Garfield or Tobey Maguire, he looks like an actual teenager, instead of a 21 Jump Street officer with a five o’clock shadow.

Poor Liz was overshadowed by Zendaya’s star power during Homecoming’s promotional tour, but she is actually the female lead. Zendaya, meanwhile, channels Julia Stiles in 10 Things I Hate About You as a sarcastic, bookish misfit. She’s a rare example of a Woke Teen character who doesn’t seem like she was written by a middle-aged dad who just discovered Snapchat. (“I just come here to sketch people in crisis,” she explains, when Coach Wilson [Hannibal Burress] asks her why she’s sneaking into detention.) With a diverse cast that avoids the clichéd jock/nerd/cheerleader roles, Peter’s school makes you yearn for a new era of teen movies.

Even the young Aunt May (Marisa Tomei), who felt like a dubious creative choice in Civil War, fits in. She and Peter have a Gilmore Girls kind of relationship, and Homecoming re-styled her with a hipster mom wardrobe instead of Civil War’s generically glamorous blow-out. (Trust me, this is a key detail in the transformation from “hot Aunt May” to “plausible human woman.”)

Much of Homecoming’s humor comes from Peter’s absolute sincerity. After his brief adventure with the Avengers in Civil War, he’s determined to be a real superhero and join the team for real. This obviously won’t happen because he’s a teenager in a spandex body-stocking, but hope springs eternal. Under the guise of a Stark Industries internship, he haplessly tries to fight crime in his crime-free neighborhood, giving old ladies directions and retrieving stolen bicycles. Convinced that the Avengers could need him at any moment, he plagues Tony’s security manager Happy Hogan (Jon Favreau) for daily updates. It’s another subtly entertaining detail for this newly youthful Peter Parker, because while he is an academic genius, he also has terrible judgment. Because, you know, he’s 15.

Peter’s first solo mission arrives in the form of the Vulture (Michael Keaton), a rare example of a well-written Marvel supervillain. He’s low-rent compared Ultron or the Red Skull, but that really doesn’t matter. You don’t have to be world-endingly powerful to scare Peter Parker; you just have to be a heavily armed adult. Beyond that, the Vulture works because he has a compelling backstory and a believable personality. Who knew?

Adrian Toombes (aka the Vulture) is a regular guy with a politically astute origin story. He used to run a salvage company, but he lost his job when Tony Stark replaced him with a government contractor. Toombes had staked his livelihood on cleaning up after the battle in The Avengers, so he decided to make a pragmatic career change. Along with his crew, he stole some of the alien debris and started a chop shop for alien weapons and stolen superhero tech.

Keaton plays Toombes as menacing, but not overwhelmingly so. He’s basically a small-business owner who got screwed over by the 1 percent, and he’s motivated to provide for his family. That makes him a Dad Joke kind of villain, full of fun little moments like exclaiming “Hot dog!” when he comes across a good haul of alien tech. He’ll make you remember how much you love Michael Keaton, just in case you ever forgot.

Sixteen movies into the franchise, Homecoming achieves the most coherent use of the MCU as a setting. Spider-Man and the Vulture were indirectly created by the Avengers, and the story builds on Tony Stark’s cultural influence—thankfully without giving Robert Downey Jr. too much screentime. At this point, Tony works better as a side character than he does as a protagonist. If he gets another solo movie, I hope it’s a Shakespearean final act about his downfall, because Homecoming characterizes him as even more insufferable than before.

Tony Stark is powerful enough that he can do whatever he wants. That’s part of the fun of his solo movies, but it’s a little different when viewed from the outside. For instance, everyone blithely accepts Tony swooping in and borrowing a 15-year-old for a fake “internship” that takes up all his free time, without bothering to check what Peter is actually doing. It’s a microcosm of the tremendous political power that Tony wields with minimal foresight or consideration.

He began the franchise as a billionaire arms dealer with a drinking problem, and since then he’s gone through a classic tech CEO midlife crisis. In his attempts to make the world a better place, he helped to build HYDRA’s surveillance system, unleashed an army of killer robots, and started a civil war over authoritarian superhero laws. All the Vulture does is sell laser guns to muggers, but because Tony is American royalty, he’s a superhero while the Vulture is just a criminal.

Peter adds a new dimension to Tony’s daddy issues, too. Tony wants to be Peter’s mentor, but thanks to his own absent father and lack of sensitivity, he’s disastrously bad at it. He has no idea how to hold a constructive conversation, and he basically drops Peter in the deep end and orders Happy Hogan to act as a babysitter. This dynamic works surprisingly well. Instead of encroaching on Peter’s personal journey, Tony unintentionally highlights Peter’s independence. He’s such a useless mentor that Peter is free to make his own mistakes and become more morally grounded by comparison.

Spider-Man: Homecoming delivers on things we’ve hoped to see in Marvel movies for years. Peter is a realistic kid who befriends bodega cats and posts YouTube videos, and he feels authentically like Spider-Man without rehashing old material. His life fits neatly into the world of the MCU, which bodes well for future movies. Spider-Man is meant to be the lynchpin of Marvel’s Phase Four, so hopefully they can keep this energy going in the sequels.