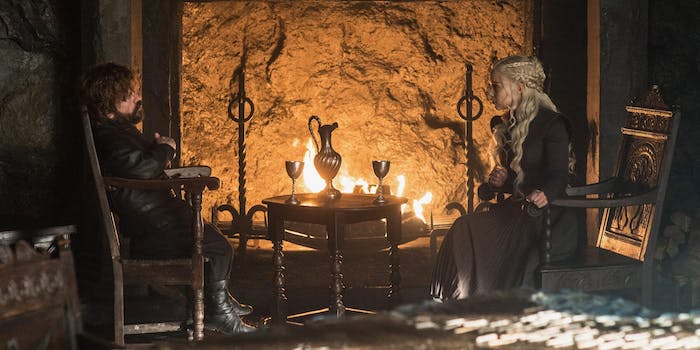 Game of Thrones may have started to give us answers in its penultimate season, but it still led to plenty of questions, with the motivations behind a particularly intriguing look given by Tyrion Lannister being chief among them. More than a year after the look that sparked more than a few theories, Peter Dinklage is finally weighing in.

At the end of the Game of Thrones season 7 finale, Jon Snow and Daenerys Targaryen finally consummated their relationship after a season full of glances and teasing from other characters—including Tyrion himself. But while that moment also reminded us who Jon really is and that Jon was unknowingly sleeping with his aunt, it also gave us a stark reminder that giving into your feelings can lead to lasting ramifications. That’s clear the moment Tyrion sees Jon enter that room.

At the time, Dinklage touched on the political consequences of that union—in that it gets a lot more complicated once love is involved—while director Jeremy Podeswa shot down the idea that Tyrion’s concerned look was one of romantic jealousy. But now Dinklage offers a new look at the scene, suggesting to Entertainment Weekly that it could be a bit both.

“No, ah, it’s complicated…” Dinklage says. “A lot of the time with Tyrion, it’s professional and personal. Obviously, he has feelings for Daenerys. He loves her — or thinks he does. She’s awe-inspiring. He’s questioning that because he doesn’t have a good track record for falling in love. There’s jealousy wrapped up in there. And he loves Jon Snow, too. They’re the two people he has the most in common with, in a way — they’re both outsiders in their own families who have refused to follow the path their family has taken, and hopefully for the better. He’s wondering how smart of a move [Jon and Dany getting romantically involved is], because passion and politics don’t mix well. He knows the two of them getting together could be very dangerous.”

The idea that Tyrion was in love with Daenerys been around for awhile—even before the season 7 finale aired—but the possibility became much more plausible after the fact. It also doesn’t hurt that George R.R. Martin’s original pitch for A Song of Ice and Fire, the series on which Game of Thrones is based, touched on a similar notion.

While one of the characters differed, Martin’s pitch involved a love triangle, one side of which would include incest. Arya Stark and Jon Snow would fall in love with one another, but they not only faced the issue of incest, Jon would’ve still been a brother of the Night’s Watch and sworn to celibacy. Later on, Tyrion would become a factor.

“[E]xiled, Tyrion will change sides, seeking common cause with the surviving Starks to bring his brother [Jaime Lannister] down, and falling helplessly in love with Arya Stark while he’s at it,” Martin wrote. “His passion is, alas, unreciprocated, but no less intense for that, and it will lead to a deadly rivalry between Tyrion and Jon Snow.”

Granted, the show might not play out the way Martin originally planned it back when ASOIAF was supposed to be a trilogy; it’s now a seven-book series. Arya isn’t a factor in this love triangle at all, and it looks like Daenerys stands in her place. If the show is any indication, Daenerys meets Tyrion first. Incest (but not celibacy) will still be a factor in Jon and Daenerys’ relationship. But as for how Tyrion reacts to his unreciprocated love? Well, we’ve got a whole season to find out.

At the very least, as Dinklage says, it’ll be complicated, so it might play out somewhat differently than the many, many love triangles we’ve seen on TV before; Jon’s position as heir to the Iron Throne will certainly be an issue. But for all of the twists, turns, characterization, and growth over the course of the series, we hope that Daenerys, Jon, and Tyrion all get more than a shoddy love triangle storyline as they face off against the Army of the Dead and end of the world.