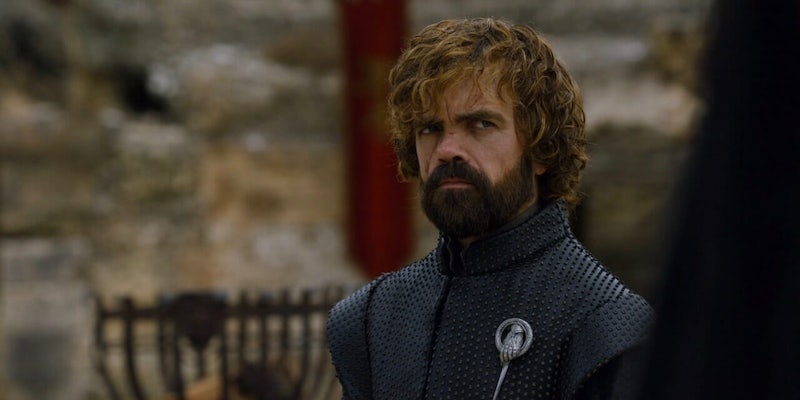 ‘Game of Thrones’ director shoots down your Tyrion conspiracy theories

It's not the kind of jealousy you might have thought it was.

Warning: This article contains spoilers for the Game of Thrones season finale, “The Dragon and the Wolf.”

The end of Game of Thrones season 7 dropped a few major bombshells, from the vast destruction of the Wall by the Night King to the deeply personal revelation of Jon Snow’s parents and legitimacy. But one of the most perplexing mysteries of the finale is more about a reaction: What was Tyrion Lannister thinking when he saw Jon make a late-night visit to Daenerys Targaryen’s chambers?

According to Jeremy Podeswa, the director of the episode “The Dragon and the Wolf,” it’s both simpler and more complex than you might expect.

Plenty of theories came out of that rather concerned look from Tyrion, which appeared to clash with an earlier scene where Tyrion teased her about her feelings for Jon. Some thought it was a look of jealousy and suggested that it could’ve been a repurposing of a plot thread seen in George R.R. Martin’s original outline for A Song of Ice and Fire: a love triangle between Jon, Tyrion, and Daenerys. (The original outline listed the third person as Arya Stark, so the potential incest factor with Jon was still there.) Others read his face as concern that Jon and Daenerys were endangering a new political alliance by shacking up together. And some read into it even further, suggesting Tyrion may have double-crossed them in his earlier conversation with his sister Cersei Lannister and promised that her child would rule the Seven Kingdoms in exchange for her support.

In an interview with the Daily Beast, Podeswa shot down the idea of jealousy, saying Tyrion’s observation of Jon and Daenerys had nothing to do with romantic feelings for her. Tyrion is more worried about the potential implications of what they’re doing, and what it means for the political alliance he’s worked so hard—even risked his life—to achieve.

He may also be worried about what it means for him and his plans for the long term. He can plan alliances and even prepare for Cersei’s inevitable betrayal, but Tyrion has no idea how to handle Jon and Daenerys coming together romantically.

“Well I think there’s jealousy, but it’s maybe not romantic jealousy, in the way that it is for Jorah, for example,” Podeswa told the Daily Beast. “I think that for Tyrion, it’s more complicated. I think he has a very special relationship with Dany and he really believes in her as a true leader and has invested a lot in her. I think for him, with Jon and Dany getting together, this represents a possible undermining of his position with her and also a monkey wrench thrown into what the master plan really is meant to be around this entire alliance.”

We saw a bit of this friction earlier in the season, which will probably only continue to grow next season. After learning about the defeat at Highgarden and the trap set at Casterly Rock, Daenerys wanted to head straight to King’s Landing to burn the Red Keep. Tyrion advised her against it, but she was tired of listening to him when his plans earned her defeats. She asked Jon, who also advised against burning cities and castles to conquer the Seven Kingdoms.

After Daenerys returned from the ensuing battle, Jon started to make appearances in Daenerys’ war room. She sought his advice and he shared more information with her. Despite Tyrion advising against saving Jon, Jorah Mormont, and the rest of the men who traveled beyond the Wall, she flew north anyway and paid for it with a dragon. She started to trust Jon even after he demonstrated how bad he is at politics after refusing to lie about pledging his allegiance to her, and she agreed to sail north with him even though other advisors weren’t fond of the idea.

Actor Peter Dinklage, who plays Tyrion, even weighed in on the downsides of mixing politics and romance during such a uncertain time in Westeros.

“It’s dangerous for everybody involved,” Dinklage said in a behind-the-scenes video. “I’m sure it’s good for both of them in the moment, but you don’t even get the relief of how beautiful it could be or should be. It’s no. It’s just, it’s not good but it should be but it’s not. It’s Game of Thrones. It’s a long history of romance not ending well on this show.”

Ultimately, while Tyrion may like both Jon and Daenerys as people, he might not be able to count on either of them to do what is best for the realm. And right now, it’s not this.

“The consequences of Dany and Jon getting together are completely unknown,” Podeswa explained. “Is she gonna make decisions now based on this new relationship? Is she gonna be able to separate her personal [interests] from the interests of the greater group? What is this going to foretell for the alliance and what they’re all meant to do as a united front? So I think the worry for him is that now, everything is up for grabs. We don’t really know who’s going to side with who, what’s gonna happen at the end of the day, and which alliances are going to be the strongest.”