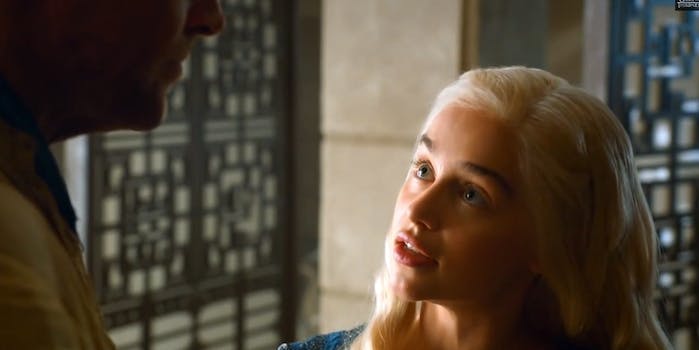 You won’t recognize George R.R. Martin’s original plans for ‘A Song of Ice and Fire’

It would've ended up being a very different fantasy series.

If George R.R. Martin stuck to his original writing plans, A Song of Ice and Fire and the book series’ HBO spinoff Game of Thrones could’ve turned out vastly different than the story we know and love.

Waterstones, a bookstore chain in the U.K., tweeted out three pictures that contained Martin’s original pitch letter for ASOIAF courtesy of HarperCollins, his publisher in the U.K. HarperCollins retweeted it as well, at least until it disappeared from Twitter without a word; the tweet itself is still viewable by a Google cache. 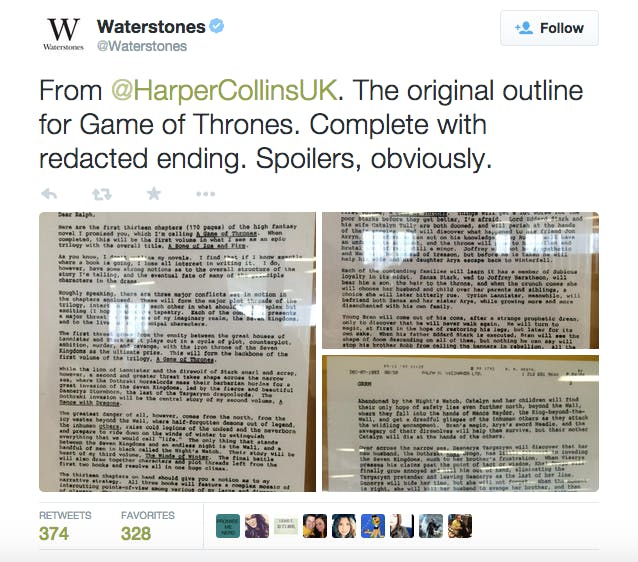 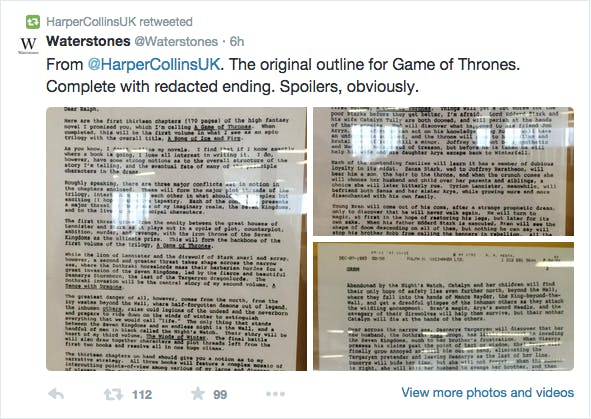 The letters, in their entirety, painted a very different picture for ASOIAF, although one that publishers still greenlit. Fans know by now that ASOIAF was originally supposed to be a trilogy with the books A Game of Thrones, A Dance With Dragons, and The Winds of Winter. His story expanded over time to push that number up for four books, then six. He’s aimed for seven since 2011—although rumors of a possible eighth book traveled around last summer. The process of writing likely allowed the books to evolve into what they are today.

In the original pitch for ASOIAF, Martin planned for the main focus to be on five characters we all know and (mostly) love who would ultimately survive the series: Tyrion Lannister, Daenerys Targaryen, Arya Stark, Bran Stark, and Jon Snow.

The plot diverges from what Martin actually wrote pretty quickly, some of which we’re glad to see. While Ned and Catelyn Stark were always doomed—and she and Robb Stark die in a less brutal way than at the Red Wedding—Sansa Stark would’ve ended up marrying Joffrey Baratheon and having his child, which she would’ve ultimately chosen over her own family. It would’ve been “a choice she will later bitterly rue.”

The books would’ve sent the Starks into the hands of Mance Rayder and the Wildlings, while in turn both Jon and Tyrion would become enamored with Arya (who would only return Jon’s feelings). Daenerys would end up in Westeros a lot sooner than she does now (after killing Khal Drogo), perhaps frustrating fans annoyed with her Meereen plot even more, and Jon’s parentage would play an important part.

Most of the plots described were either drastically changed or came to pass, but some aspects could still potentially happen, making it more than just a giant “what if” letter. 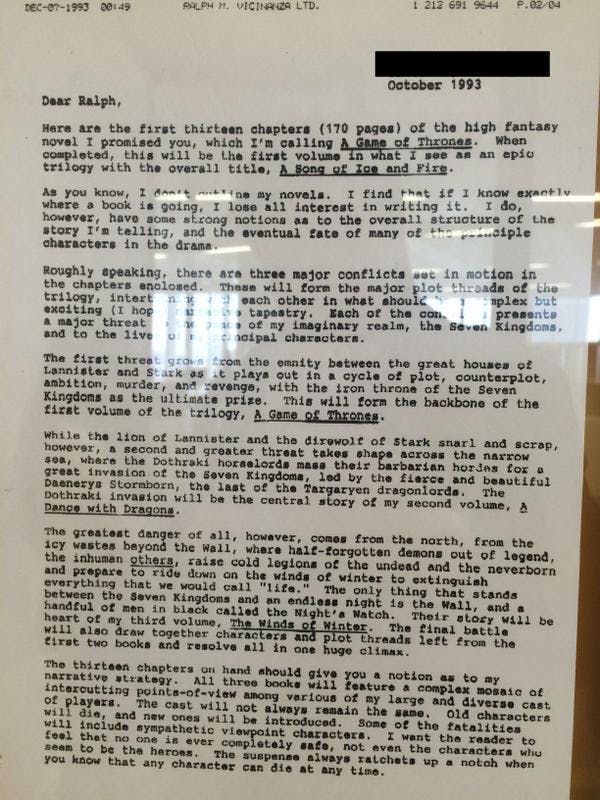 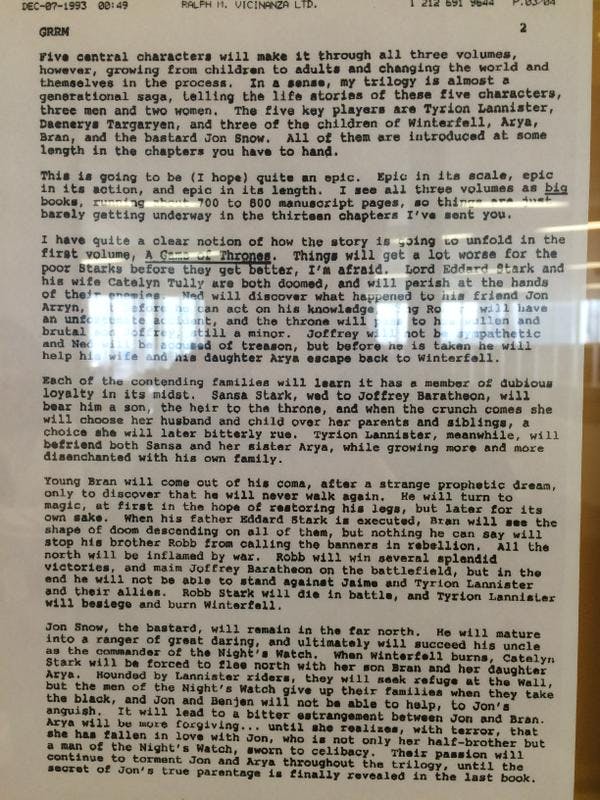 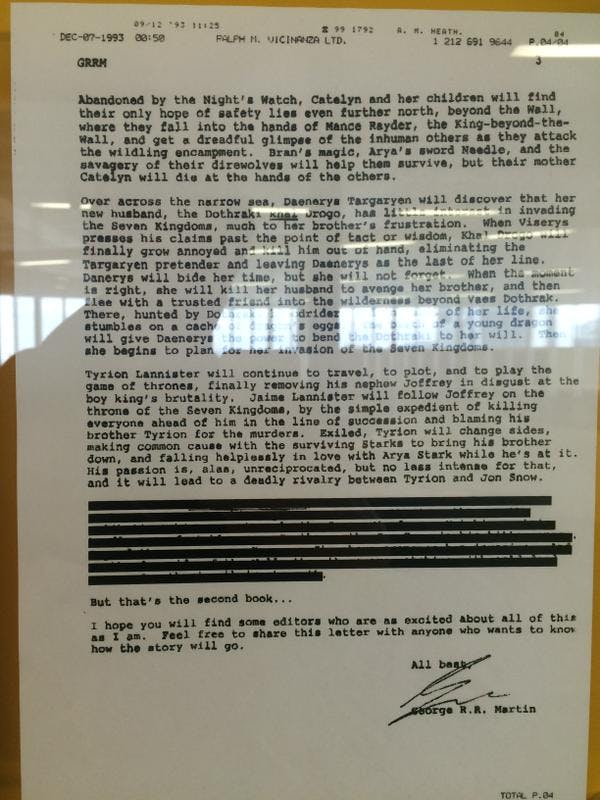 According to Waterstones, one of the final paragraph contains spoilers it felt necessary to redact. All we have as a hint from Martin is his note of “But that’s the second book…”

Could it be an important plot point regarding TWOW or A Dream of Spring, the final two books in Martin’s series? If there’s a will there’s a way, and the sleuths over at r/asoiaf are trying their damnedest to figure out what that redacted paragraph says. It’s leaving some on the subreddit to ask, “Is anyone else reading this and thinking ‘we’re insane’?” although they’re just as curious to see what comes of it as everyone else.

They’ve been working on trying to decipher the covered words for hours, and you’ve got to admire their determination—especially considering what they’ve managed to accomplish.

If there’s any merit to what they’ve figured out so far, we’re going to have an interesting couple of books. Let’s hope that HarperCollins will release the letter without the redacted section once the series finishes.