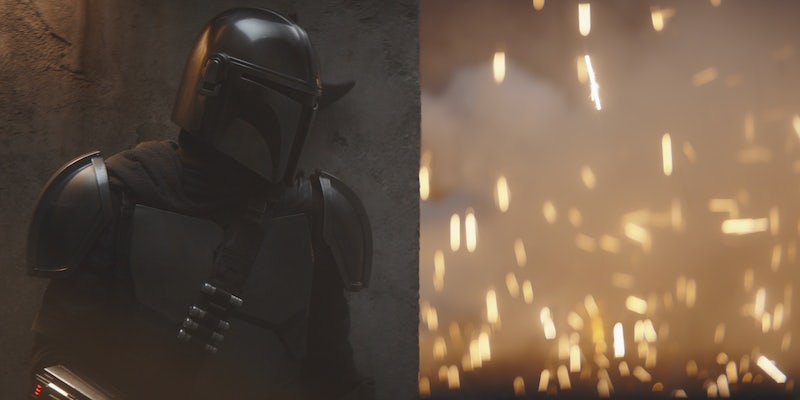 ‘The Mandalorian’ comes to a crossroads in Chapter 3

A moral quandary awaits the Mandalorian after he turns in his bounty.

There comes a time in the life of almost every major Star Wars protagonist when they’re faced with a difficult choice: save their own skin (which sometimes comes with a reward), or risk everything to save others? For a character like DJ in The Last Jedi, it’s an easy call to take the credits and run. Most of our heroes don’t hesitate to risk their own lives to aid in a battle victory.

But more often than not, the characters that really draw us in (and the ones we often find the most relatable) are the ones who struggle with making that choice. They might run off at first, whether it’s Han Solo only looking for a payday in A New Hope, or Finn trying to get as far away from the First Order as he can in The Force Awakens, but they always come back around in time. And the Mandalorian himself is no exception to this as he finds himself facing his own moral quandary in an episode that upends every part of his life.

In hindsight—and for some viewers, likely foresight as well—there was no way that the Mandalorian would’ve just delivered Baby Yoda to the Client and went off for good. Logistically, it would make for a less interesting show, and given how fervently we’ve collectively latched onto Baby Yoda since his very first appearance, the Mandalorian might not have survived the fandom outcry.

From what we had already seen of the Mandalorian’s shiny Beskar armor in trailers, we figured that the Client would get his hands on Baby Yoda, at least for a short time. And on paper, the events of “The Sin,” from Mando’s change of heart to the last-minute save from the Mandalorians, were basically a foregone conclusion. All of the tropes of classic storytelling are right there.

In the hands of director Deborah Chow—the first woman to direct live-action Star Wars in the franchise’s 42-year history—“The Sin” never felt like an inevitability. Exquisitely shot and with the right amount of tension, you question what the Mandalorian might do just enough that you’re sucked into a story we’ve seen play out time and again without it feeling old. It’s stylized without losing track of the characters in the action, and from the get-go, you can see exactly why she was hired to direct Disney+’s Obi-Wan Kenobi series, making us all the more excited for it.

But first, Mando (as he’s called throughout the episode), has an asset to deliver. It’s smooth sailing through space after he and Kuiil repaired his ship, but Baby Yoda, fresh from his lengthy post-Force nap, quickly shows how far Mando has to go to baby-proof his ship. “It’s not a toy,” the Mandalorian tells Baby Yoda as he takes away a silver ball that Baby Yoda removed from one of the ship’s levers.

Mando’s boss Greef Carga checks in on him and lets him know just how anxious the Client is to receive Baby Yoda, although Carga has no idea if the Client “wants to eat it or hang it on his wall.”

Although they both lay it out more explicitly a little later on, it’s our first glimpse of the code that Mando and the other bounty hunters under Carga’s wing follow: once a job is completed, don’t ask questions and act as if it never happened in the first place—something that, perhaps for the first time in his career as a bounty hunter, Mando has trouble doing. Until he doesn’t.

“The Sin” is a fascinating choice for an episode title because of its ambiguity. There’s the bounty hunting betrayal, of course. To the audience (and perhaps himself), Mando’s sin is that he sold Baby Yoda to the Client for a camtono full of Beskar. Although we don’t see anything happen to Baby Yoda at that moment, he’s clearly not pleased with the development and starts crying as Dr. Pershing takes him into another room, breaking all of our collective hearts in the process. He justifies it at first by calling Baby Yoda his enemy, but one who didn’t know that they were enemies. To some members of the Tribe, Mando broke a cardinal rule by working for the Empire to obtain his Beskar that disappeared in the Great Purge.

We don’t know all of the details quite yet, but the Mandalorians have fallen far since their glory days. In flashbacks, we see a bit more of who a younger Mando, who’s hidden away as super battle droids—soldiers used by the Confederacy of Independent Systems during the Clone Wars—raid a village. The Mandalorians we do encounter are in hiding for some reason (only one of them is allowed outside at a time), but they keep their own code. Their signet can be determined by a creature they killed to obtain the Beskar, which Mando forgoes because Baby Yoda helped him kill the Mudhorn he faced in “The Child”; the Armorer makes him whistling birds, which can take out multiple enemies at once, instead. They’re not allowed to take off their own helmets or let anyone else take it off. (It also has us wondering just when Mando will break this code even more now that he’s not permitted to do so.)

Despite wherever Mando obtained the Beskar, he didn’t compromise his Mandalorian principles. “This is the way,” the Armorer says, revealing the mantra for their tribe, one we’ll hear several times more before the episode ends.

Mando’s way? No matter how much he tries to dive back into his own life (including grabbing a puck for a bounty on a Mon Calamari royal), his way leads him right back to Baby Yoda once he finds the metal ball that Baby Yoda tried to eat. He contemplates in silence, but it doesn’t take long for him to make up his mind: He’s going after that baby.

And it’s completely entertaining to watch Mando go full-on Dadalorian. He fights his way past rusty stormtroopers and dark hallways to find Dr. Pershing in a lab with Baby Yoda, the latter who is strapped into a machine that’s scanning him. In this episode, we also catch a glimpse of the patch on Pershing’s right arm, which—as fans first pointed out after the first episode—matches the one worn by all of the clones on Kamino during Attack of the Clones.

The jury is still out on whether Baby Yoda is a clone. Could Pershing be collecting enough material from Baby Yoda to create clones of his own? All we know is that Pershing says that he’s the only reason why Baby Yoda is still alive and that there’s someone even higher than the Client and Pershing who want what Baby Yoda had to offer.

But now that Mando has Baby Yoda again, there’s now a giant target on his back. Every single bounty hunter who had a tracking fob for Baby Yoda—and the Client hired basically every bounty hunter to ensure he got the bounty—now had the exact location of Mando and Baby Yoda. With much less of an ethical dilemma than Mando, they were gonna go for that payday.

So far, we’ve seen Mando face near-impossible odds, and each time, he’s made it out with a little help from some unlikely allies. In “Chapter 1,” he teamed up with IG-11 to take out an entire encampment. In “The Child,” Baby Yoda stepped in with the Force. And in “The Sin,” as Carga and his fellow bounty hunters pinned Mando down, the rest of the Mandalorians emerged out of hiding and took to the skies with their jetpacks (which Mando looks enviously at) to help Mando escape. Even though it means that they’ll have to find another planet to hide out on. Some of them might not have approved of how Mando got the Beskar for his armor, but if he’s in trouble, they’re going to help him, no questions asked.

This is the way. This part of Mando’s life is at an end with a bang and a whimper as Mando lets his guard down enough to let Baby Yoda play with the lever’s metal ball once they’re back on the ship. They’re heading somewhere, now both with a target on their back.

Although The Mandalorian has fully swept us into Mando’s world and had us connect with both a masked loner and the mysterious creature it has fully taken under his wing, it doesn’t come without a major Mudhorn in the room. We’re three episodes in, and only a single female character has spoken: the Armorer, the masked leader of the Mandalorians in hiding, someone who provides wisdom and forges Mando’s armor.

We know that Gina Carano’s former Rebel shock trooper Cara Dune will show up next week in an episode directed by Bryce Dallas Howard and Fennec Shand, the assassin played by Ming-Na Wen, will appear in episode 5, so we’re more than aware that this isn’t an issue for the entirety of season 1. But it’s still a massive misstep in an otherwise top-notch series for seemingly no reason. And in a time in Star Wars franchise history when Lucasfilm has made vast leaps to include more inclusivity and more female characters on the screen in a galaxy far, far away—including making the main hero of the sequel trilogy a woman—it stands just as much as Mando’s newly minted Beskar armor will in a backwater cantina.