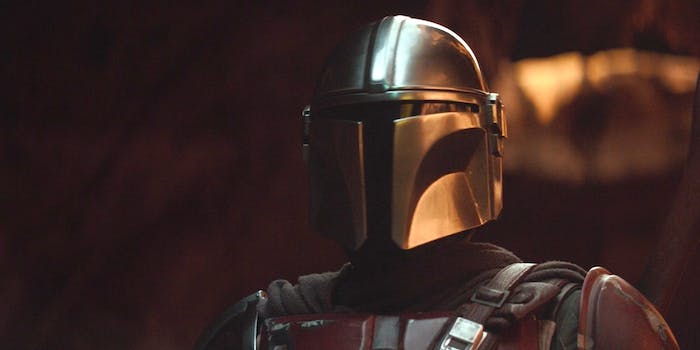 ‘The Mandalorian’ opens up its mythology even further in ‘Chapter 2’

Retrieving it was easy. Transporting it is harder.

This recap includes spoilers for Disney+’s The Mandalorian episode 2. Click here for the episode 1 recap.

The first episode of The Mandalorian placed us right in the middle of a lone bounty hunter’s world as it embraced its western roots. But now that he’s got his latest bounty, The Mandalorian blends hints of mythology with big action sequences that place the Mandalorian in a position he’s probably not used to being in.

It’s an episode of few words—the Mandalorian is the only human we see in the entire episode, and he and Kuiil the Ugnaught are the only two speaking Basic—and at 32 minutes (including credits), the episode flies by even more quickly than the first. Under the direction of Rick Famuyiwa (Dope), it never feels rushed even as “Chapter 2: The Child” is several minutes shorter than the series premiere. It’s a nice change of pace, especially considering that the Star Wars universe is full of temptation to explore those nuggets in full detail or stretch an episode out far longer than it needs to be.

We return to the Mandalorian shortly after we last left him: with the Asset on his way back to his ship. But as the Mandalorian quickly discovers, actually obtaining the Asset was the easy part of the job. He’s intuitive, a loner who knows how to accept help when it falls into his lap, and he’s not afraid to stab a being or droid in the back to get his bounty. (We never knew you, IG-11!)

What the Client never prepared him for was the fact that the Asset was a 50-year-old creature who’s the same species as Yoda and looks like a baby; in this episode, it’s even referred to as “the Child.” And, 50 or not, this creature is acting exactly like you’d expect a child who’s potentially venturing outside the very small world it knew for the first time. It’s curious, excited, about to accidentally get itself killed, and it has almost definitely imprinted on our Reluctant Mando-Dad.

The Child even joyfully defies the Mandalorian’s exasperated order to “spit that out” when the Child gets one of the planet’s native creatures in its mouth and swallows it whole, laughing as it burps. It’s utterly delightful, and it feels very much in line with what we’ve seen of Yoda’s sillier side. (That’s not to say that the Child is Yoda, although the clone theory is very much out there.)

“This is what was causing all the fuss?” Kuiil says as he catches his first glimpse of the Child, putting it lightly.

We already know of three parties who were hired to extract the Child, apart from all of the dead bounty hunters Kuiil helped: the Mandalorian, IG-11, and a group of Trandoshans wielding a tracking fob of their own. The Mandalorian makes quick work out of them, but not without the Trandoshans getting a few good jabs in. That’s when the Child goes from being a very cute creature to the most fascinating cute creature on the show as it approached the Mandalorian’s wound on his left arm and appeared to try healing it with the Force.

The Mandalorian stops the Child before it can do anything, so we don’t know if the Child would’ve been successful. But the sheer attempt introduces the ability of Force healing, which was largely associated with those who used the light side of the Force (including the Jedi), back into the Star Wars canon, which could have much bigger implications in a galaxy far, far away. (Is it an ability unique to this Yoda-esque creature or its species, or is it a known Force skill we’ve never seen until now?)

That revelation, paired with the Child harnessing the Force to save the Mandalorian from being trampled by a Mudhorn later in the episode, solidifies that the Child is Force-sensitive. But the Mandalorian, who witnessed that ability, and Kuiil, who heard about it afterward, have no idea what just happened.

Even though The Mandalorian takes place in a post-Galactic Empire world, one where the Jedi Luke Skywalker helped saved the Rebellion and defeat Sith Lords with the Force, much of what the greater universe knew about the Force had already been lost. The Emperor took out most of the Jedi Order with Order 66 in Revenge of the Sith, and in the years since, Darth Vader and the Inquisitorious were tasked with taking out any Jedi who survived the Order and to kidnap Force-sensitive children.

Those who survived were often placed into hiding or made completely ignorant about their abilities. But even if it was safe to be Force-sensitive in a place not riddled with lawlessness, there would have been precious few places to learn about that information. (If Rey, who lived on an Inner-Rim planet, thought that Luke was only a myth in The Force Awakens, who knows how little the Outer-Rim planets knew about what went on in the galaxy.)

But that’s a question for the Mandalorian to ponder upon for another day. He had more pressing issues on his hands, such as the fact that a bunch of Jawas (the same creatures that picked up R2-D2 and C-3PO in A New Hope) raided the Razor Crest for parts, making it impossible for him to leave the planet on his ship. He tries his hand at getting them back himself, but even the Mandalorian, who took on an entire encampment with only a droid to help him just last episode, can’t stop a Sandcrawler full of Jawas by himself.

Instead, he’s forced to play their game and trade for his parts. The relationship is immediately antagonistic—“Weapons are part of my religion,” he quips when Kuiil tells him to drop his rifle—but after refusing to part with his Beskar armor or the Child, they task him with retrieving an egg. That task comes with a very angry Mudhorn, who gets the upper hand and is about to take out the Mandalorian until the Child intervenes.

We don’t know how proficient the Child is with the Force or if, at age 50, how much it’s used its skills before now. The Child is talented but potentially untrained, and the Child quickly becomes so drained from the effort that it falls asleep for several hours. But it gives the Mandalorian his shot to kill the Mudhorn so he can grab the egg, which basically looks like a giant, furry Cadbury egg; the Jawas all reach out to grab a taste of its insides once opened. The Jawas keep their word, and the Mandalorian gets his parts back, which Kuiil helps reinstall.

The Mandalorian offers Kuiil both part of his reward and a job to show his gratitude, but Kuiil refuses. He sees repairing the ship as helping a guest, but after working for most of his life, he’d rather enjoy a life of peace. It’s unclear if this is the last we’ll see of the Ugnaught, but for the time being, the Mandalorian is finally back on track—with any uneasy questions about what his bosses might want with the Child left for a future episode.