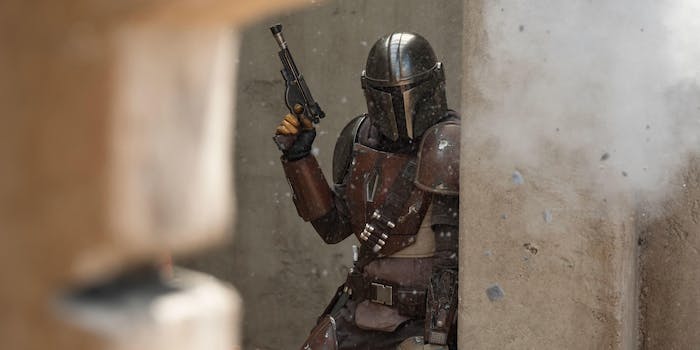 A beginner’s guide to Mandalorians in the ‘Star Wars’ universe

To Mandalore and back.

This article contains spoilers for The Mandalorian.

While it’s Lucasfilm’s first foray into a live-action Star Wars TV show, The Mandalorian is already quintessential Star Wars: it focuses on some intriguing characters, brings a vast galaxy to life, and it’s rich in lore. And there are few who have more lore ripe to explore than the Mandalorians.

If you’ve seen the original Star Wars trilogy, that name might invoke the series’ most infamous minor character, the bounty hunter Boba Fett and his end in a Sarlacc pit. In Attack of the Clones, it’s Boba Fett’s father Jango, who was Patient Zero for an entire clone army. Then Star Wars: The Clone Wars introduced a Mandalorian society, and Star Wars Rebels picked up the wreckage that the Empire wrought, largely with one of its main characters as a Mandalorian—both of which are now streaming on Disney+. (That’s not to mention Boba’s extensive history in the decanonized Expanded Universe.)

And it’s certainly a culture that vastly interests both Mandalorian director Dave Filoni, the mastermind behind Clone Wars and Rebels, and writer-creator Jon Favreau, who voiced a recurring Mandalorian character in Clone Wars.

By the time we’re introduced to Pedro Pascal’s Mandalorian, he’s already something of a legend just based on the armor he wears that distinguishes him as a Mandalorian. Nobody needs to know who he is just yet, him being a Mandalorian is enough.

“I’ve never met a Mandalorian,” Kuiil, the Ugnaught who offered the Mandalorian aid in the show’s series premiere. “I only read the stories.” Stories such as the fact that the Mandalorian’s ancestors used to ride the Mythosaur.

And oh, there are stories about the Mandalorians. They have a vast (and often bloody) history scattered throughout the galaxy, have warred amongst themselves, for the Empire, and against the Empire. But there is still so much we don’t know about them, what makes them tick, and the bounty hunter of few words at the center of it all.

By the time we visit Mandalore itself in The Clone Wars’ second season, there is already plenty of backstories that are only hinted at. Several years before, a civil war broke out between Mandalorians who wanted to live and rule peacefully and those who wished to bring back traditionally violent Mandalorian ways. The peaceful faction, known as the New Mandalorians, won out and banished the losing side to a nearby moon called Concordia. Those who survived the exile formed a group known as Death Watch.

The planet officially stayed neutral during the Clone Wars, but Obi-Wan Kenobi still has reason to visit Mandalore several times during the series’ run. He is often working with Duchess Satine Kryze, the ruler of Mandalore whom Obi-Wan has a soft spot for; at one point, he admits that if Satine had asked, he would’ve left the Jedi Order for her. Obi-Wan and Satine face off against Pre Vizsla and Death Watch, which has worked with Count Dooku and the Separatists to try and get control of Mandalore back from the New Mandalorians and eventually teams up with Darth Maul and a criminal alliance, who took control of Mandalore from Satine.

Maul later killed Satine to personally hurt Obi-Wan (fridging her in the process), and when Pre Vizsla tried to assert his power after Mandalore’s coup, he died by Maul’s hand too. But his reign didn’t last long: the Siege of Mandalore, one of the last battles of the Clone Wars that was led by Anakin Skywalker’s former apprentice Ahsoka Tano, ultimately gave power back to the Mandalorians; Satine’s sister Bo-Katan Kryze, who was at one point part of Death Watch until she rebelled against Maul’s rule, was appointed as the Regent of Mandalore. While we know some of the particulars, the final season of The Clone Wars, set to debut on Disney+ in February 2020, will show that climactic battle in far more detail.

But that’s the Mandalorians at the peripheral of the story. Filoni and his crew placed a Mandalorian center-stage in Rebels with Sabine Wren, who was part of the motley Rebel cell at the center of the series. She largely grew up under Empire rule, supporting them until she became disillusioned by its message.

Sabine defected, destroying a weapon she designed that had the ability to manipulate Beskar alloy and could bring Mandalore to its knees. Her decision caused a rift in her family, who were punished for Sabine’s choice anyway, and that estrangement did a number on Sabine; family is especially important for Mandalorians.

Later in the series, Sabine obtained the Darksaber, an ancient lightsaber that belonged to the first Mandalorian Jedi that was once used to unite all of Mandalore. After she learns to wield it, the Ghost crew heads to Mandalore to convince Sabine’s family to help the Rebellion, and later to stop the Empire from rebuilding the weapon Sabine once designed. Racked by guilt over what she had done, Sabine makes it her personal mission to destroy the weapon once and for all, all while pushing Bo-Katan to take up the lightsaber and lead the rebellion on Mandalore.

Boba and Jango Fett both wear armor that ties them to Mandalore, and the duo—like the Mandalorian at the center of the TV series—were both bounty hunters. Boba wears his armor as a nod to his father. After Jango’s death at the hands of Mace Windu, a young Boba even launches several unsuccessful attempts to kill Mace Windu to avenge his father.

Boba, a clone made from Jango’s DNA who ages normally—versus the sped-up aging process of the Republic’s clone army—probably wouldn’t be considered a traditional Mandalorian. (And considering that Dr. Pershing appears to have an arm patch seen on Kamino, a.ka. the planet where the clone army grew up and trained, on his arm, clones might very well come back into play.)

“Boba Fett is a clone, according to Attack of the Clones, and by asking [creator George Lucas], he would say Boba Fett is not Mandalorian, not born on Mandalore,” Filoni told Entertainment Weekly back in September. “He’s more of a person indoctrinated into it, into the way of life, and gets a hold of the armor.”

As for Jango, he claimed that he was born on Concord Dawn, a planet located within the Mandalore sector and under Mandalorian control. But after Jango’s death, Mandalore seemed to want nothing to do with Jango Fett. In the Clone Wars season 2 episode “The Mandalore Plot,” Prime Minister Almec tells Obi-Wan that Mandalore is a peaceful planet and that its warriors had died out years ago after being exiled. In response, Obi-Wan mentions the recent encounter he had with Jango Fett, to which Almec distances Mandalore even further from Jango.

“Jango Fett was a common bounty hunter,” Almec replied angrily. “How he acquired that armor is beyond me.”

But Lucas wouldn’t consider Jango Fett to be Mandalorian, either. Speaking to Rebel Force Radio, Filoni explained that the distinction that while Jango might not have been Mandalorian by blood, he could’ve still had Mandalorian ties.

“In discussions directly with George, he was very adamant about Jango not being Mandalorian, which is the entire reason why that scene existed at that moment. To have the specificity that Jango was not Mandalorian, at least not to Almec, not to those Mandalorians… Now Jango was a bounty hunter that somehow came into having that armor. Perhaps he ran for a period with Mandalorians, was adopted into that warrior culture for a period and trained with them and gained greater skills at that point. I think all that’s possible. But would he have a direct blood relation to that line like Satine would? No.”

A name, Beskar steel, and the importance of family history

Even if you don’t have Clone Wars or Rebels as reference points coming into The Mandalorian, “Chapter 1” does a good job of showing us how revered the armor of a Mandalorian is in the show—and the fascination that others have with it. The man who tries to start something in the cold open asks the Mandalorian if his armor is “real Beskar”; the Client’s down payment to the Mandalorian to collect the Asset is a block of Beskar, and he notes that “the Beskar belongs back into the hands of a Mandalorian.”

Even the Armorer, who actress Emily Swallow described as the “covert leader of a Mandalorian clan in hiding” known as the Tribe and the “keeper of the old traditions of Mandalore,” takes notice when the Mandalorian brings her the block of Beskar.

But Mandalorian armor isn’t just something that can look cool or look shiny. Depending on whose armor we’re talking about, it can carry the stories of those who came before you.

“The armor I wear is 500 years old,” Sabine told Ezra Bridger in Rebels. “I reforged it to my liking, but the battles, the history, the blood, all lives within it. The same goes for every Mandalorian.”

So far, we know little about the Mandalorian himself. Pascal revealed in a video interview with ScreenSlam (around the 2:30 mark) that the Mandalorian’s name is Dyn Jarren.

And as the Armorer forged him a pauldron, the Mandalorian flashed back to his childhood as droids attacked his village and he was placed into hiding. Did he lose everything that day? Probably.

With a pauldron on hand, the Mandalorian seems to be rebuilding his armor and making his own way in the world. Based on the trailer, he gets his hands on enough of it at one point in the season for a major upgrade.

But with an entire season ahead, there is more than enough room to not only get into how he came across that Beskar—does he give the Asset over to the Client?—but also what it means to be a Mandalorian in a post-Empire world.