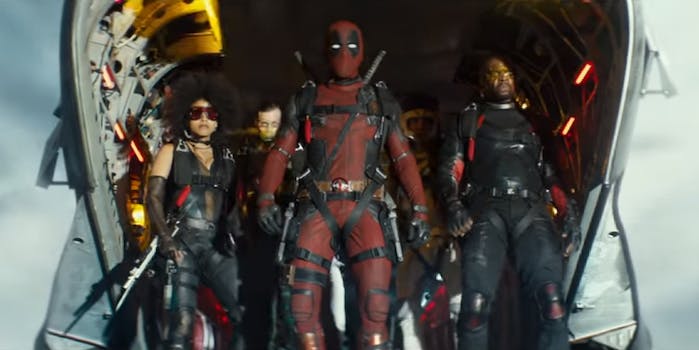 Report: Disney is still struggling to fit Deadpool into its plans

How does the foul-mouthed Deadpool fit into Disney's family-friendly plan?

Disney is reportedly struggling to figure out how to work Deadpool into the MCU.

When the media conglomerate purchased the rights to 21st Century Fox in 2017, fans of Fox-owned properties like Fantastic Four and X-Men eyed the future eagerly. Disney, too, viewed these potential moneymakers with enthusiasm. These franchises are all but guaranteed to succeed with Disney at their helm—but one Marvel property Disney won in the merger is causing logistical hurdles.

The Merc with a Mouth, whose first two films grossed a collective $1.5 billion worldwide, is one of the most lucrative franchises Disney obtained. Unfortunately, his language, gore-filled action sequences, and aggressively non-PG approach do not fit Disney’s family-friendly output.

The studio is struggling with how the “very R-rated Deadpool” might fit into the Marvel Cinematic Universe, according to reporting from Variety. Disney execs are determined to better fuse its newly obtained properties into the well-established bedrock that is the MCU. Unfortunately, the path to marrying the PG-13 Marvel world with Deadpool’s cynical, blood-soaked stories is easier said than done. Back in 2017, Disney CEO Bob Iger had high hopes that Deadpool could fit neatly into Disney’s future plans.

“We think there might be an opportunity for a Marvel-R brand for something like Deadpool,” he said, per Observer.

The idea was perfectly reasonable. As long as parents are aware that not all superheroes are fit for kids, Disney should be able to easily release profanity-laced sequels to its heart’s content. But what about those action-packed team-up films that have been Marvel’s biggest moneymakers to date? When the next Avengers flick rolls around, fans are going to want to see the Regenerative Degenerate there in all of his foul-mouthed glory. Disney’s initial goal was to “find a way for the character to move seamlessly between Avengers spinoffs and bloody, profane stand-alone adventures,” according to Variety.

This is easier said than done. If Disney changes Deadpool too much for a family-friendly version, fans will complain. If execs allow him to remain the terrible excuse for a superhero we’ve all come to love, no Deadpool-inclusive Avengers film can have that cushy PG-13 rating.

All hope is not lost, however. This is Deadpool, after all. If ever there were a character who allows for creative workarounds, it’s the fourth-wall-breaking menace in red and black. Disney could explain away a degree of censorship with a coy, meta nod on-screen. Ideas like bleeping Deadpool—and only Deadpool—in an Avengers flick could amuse Deadpool fans while still appeasing wider audiences. Add to this the potential for Deadpool to point out how inappropriate his presence is, and Disney has the recipe for a potentially perfect pairing.  There are dozens of other possibilities as well, from going all The Good Place on Deadpool’s profanity—that’ll fork with audiences—to working one of his redemption arcs into the storyline.

No matter where Disney decides to go with it, audiences are watching.