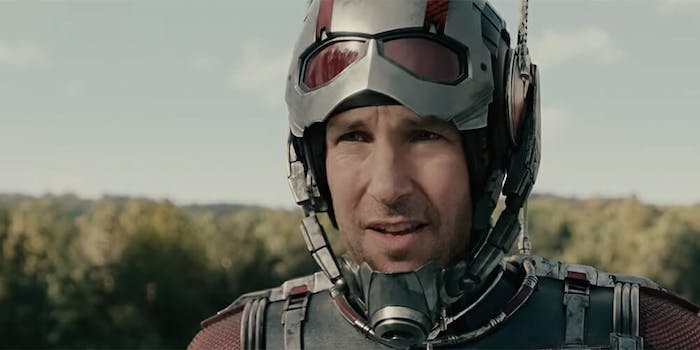 It’s far-fetched, but fans are once again floating the idea that Ant-Man could defeat Thanos in Avengers: Endgame by crawling up his butt and growing to a giant size.

As Vox explains, the imminence of Avengers: Endgame (in its possibly three hour and two minute glory) has led to the resurfacing of the infamous meme theory, which is so ridiculous it might just hold weight (and therefore warrants an unlikely spoiler warning).

Since the build-up to Infinity War, when people thought Thanos would be defeated within that film, this theory has been around in some way. On July 29, 2017, Redditors on the r/marvelstudios subreddit began speculating on the worst ways the Avengers could defeat Thanos. Reddit user sodabased came up with the most popular post in that thread, which involved sending the Hulk into Thanos’ mouth with Ant-Man’s suit and deactivating it when the Hulk was in Thanos’ urethra.

Later that year, Reddit user maxwellthebeech posted a mock-up poster of a slightly different, less graphic version of this theory on the r/Marvel subreddit and received over 1,200 upvotes.

The most recent incarnation originated on Twitter from user filmgloss and was written after the release of Infinity War.

The joke reached its pinnacle in July 2018 when an interviewer confronted Paul Rudd directly with the theory. After asking Rudd to read the tweet in question, the interviewer and Rudd had a rather straight-faced conversation about the possibility of this theory coming to fruition.

In the stinger of the first Avengers: Endgame trailer, Ant-Man’s appearance signaled that he would play a significant role in the movie’s plot after being noticeably absent in Avengers: Infinity War. Since then, fans of the 2017 meme have been boosting momentum for the theory on social media and speculating that the plan still could be on the table for Endgame.

this meme is exclusively to be enjoyed by a highly specific group of fans#endgame #nintendo #avengers #antman #thanos #mario #marvel pic.twitter.com/Dzt5FEGnZm

Part of the groundswell is definitely just due to the funny nature of the theory. It’s also possible that the formulaic superhero film model has subconsciously forced consumers to absurdist extremes to distract them from how truly predictable these movies are.