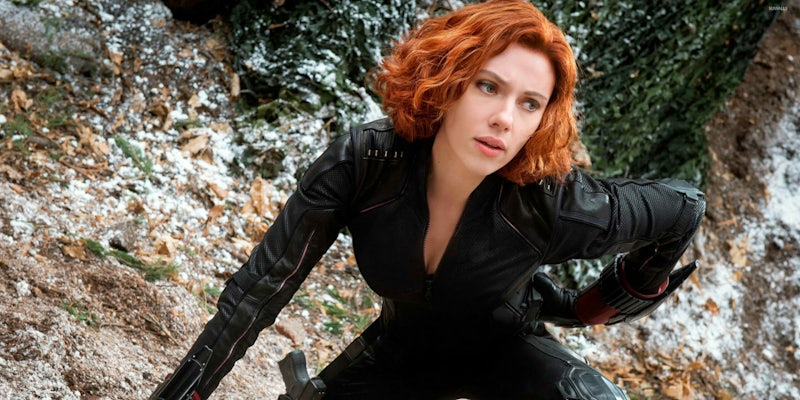 By playing a trans man and an Asian woman, ScarJo alienated her target audience.

In recent months, you may have noticed Marvel fans expressing a certain ambivalence toward the Black Widow movie. Not because they dislike it on principle, but because they object to Scarlett Johansson. In the eight years between Black Widow’s debut and Marvel finally greenlighting a solo movie, Johansson’s public image followed a similar trajectory to Joss Whedon. Previously heralded as a feminist hero, she’s now widely criticized by her own target audience.

It’s tempting to see this as a troubling example of callout culture, where celebrities—especially women—are held to impossibly high standards of behavior. It’s also true that Johansson dealt with some genuine bullshit during her tenure as Black Widow, fielding offensive interview questions, and being reduced to token status by sexist critics. At the same time, there are legitimate reasons why she’s Marvel’s most controversial star.

As a rule, Marvel’s lead actors are likable hunks who avoid stirring up trouble in public. Iron Man transformed Robert Downey Jr. into an untouchable celebrity titan. The three Chrisses are a charm offensive of self-deprecating interviews and charity work. Tom Holland is adorable. Chadwick Boseman is smart and effortlessly cool. Everyone likes Paul Rudd and Mark Ruffalo. Doctor Strange earned the harshest reception from a political standpoint, but that mostly related to the filmmakers and Tilda Swinton—not Benedict Cumberbatch. Even Jeremy Renner, the most gaffe-prone Avenger, is a less divisive figure than Johansson. Her career choices seem specifically designed to alienate the very fans who campaigned for her to get a solo movie.

Just this month, Johansson decided to play a transgender man in a biopic called Rub & Tug—a heavily criticized move among LGBTQ advocates. Her initial response to the Rub & Tug backlash made things even worse. Instead of explaining her decision to play a trans man, her representative told journalists to speak with other cis actors who played trans roles—including Jeffrey Tambor, who got fired from his own show for allegedly sexually harassing trans women.

On Friday, though, she released a statement to Out with the news that she was withdrawing from the film, saying “Our cultural understanding of transgender people continues to advance, and I’ve learned a lot from the community since making my first statement about my casting and realize it was insensitive.”

does scarjo just spin a wheel of minorities and pick another oppressed group to screw over every six months, like, is that her job?

Ghost in the Shell faced criticism for similar reasons last year with Johansson playing a whitewashed character in Japan.

Add this to ScarJo’s continuing friendship with Woody Allen, and the problem is clear. There’s a stench of hypocrisy to her feminist image, as she capitalizes on marketable girl-power while promoting transphobic and racist trends. As the highest-grossing actress of all time, her motto seems to be, “I got mine.”

Johansson’s problematic image becomes more obvious with each new Black Widow update. This week, when Marvel announced Cate Shoreland as the director, the fan response devolved into arguments about Johansson. She still has plenty of supporters, but there’s a growing mood that this movie arrived way too late. Fans are daydreaming about Black Widow being recast with other actors or characters from the Marvel mythos. There are viral posts about alternate timelines where Emily Blunt accepted the role instead. Johansson’s name is now synonymous with taking roles from trans and Asian actors, to the point where it’s literally a meme.

So, will this have any material impact on Black Widow‘s success? Probably not, because ScarJo’s divisive status puts feminist fans in a bind. They may not approve of her personally, but a boycott could do more harm than good. If Black Widow does poorly at the box office, it just confirms negative expectations for female-led blockbusters and female directors. So even if you don’t support Scarlett Johansson, there’s pressure to support her movie.

Editors’ note: This story was updated after Johannson withdrew from the movie Rub & Tug.