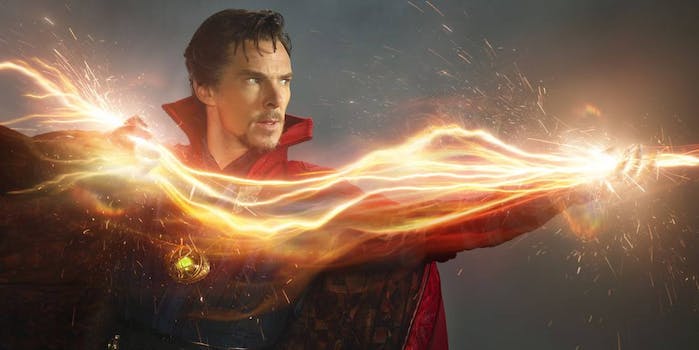 The movie's not even out yet, and the cast and crew are already on the defensive.

It’s never a good sign when you’re doing damage control for a film that won’t be released for another seven months.

The first trailer for Marvel‘s Doctor Strange provoked a mixed response, with people praising its visual effects but criticizing its potentially racist subtext. Many fans objected to Tilda Swinton playing the Ancient One, a character who was Tibetan in the comics. The issue played into broader concerns about Asian representation in the film.

In an attempt to clear the air, screenwriter C. Robert Cargill explained his reasoning behind Marvel’s decision to cast Swinton. Speaking to the YouTube channel Double Toasted, Cargill described the Ancient One as a “cultural landmine” when adapting classic Doctor Strange comics for modern audiences.

“The Ancient One was a racist stereotype who comes from a region of the world that is in a very weird political place. He originates from Tibet, so if you acknowledge that Tibet is a place and that he’s Tibetan, you risk alienating one billion people who think that that’s bullshit and risk the Chinese government going, ‘Hey, you know one of the biggest film-watching countries in the world? We’re not going to show your movie because you decided to get political.'”

This seemingly confirmed the popular theory that Marvel revamped the Ancient One to cater to Chinese audiences, although Cargill later tweeted that it was just his personal view, not Marvel’s official reason for rewriting Doctor Strange’s origin story. (In addition to altering the Ancient One’s ethnicity, the film also moved part of the story from Tibet to an as-yet-unspecified location in Asia.)

CLARIFICATION: that interview answer going around was to a question from a fan specifically about MY JUSTIFICATION, not Marvel's.

FOR THE RECORD: no one at Marvel or with the film ever talked to me about China, so contrary to headlines, I didn't confirm anything.

In the same interview, Cargill explained why they chose a white actress instead of casting someone like Michelle Yeoh.

“If you think it’s a good idea to cast a Chinese actress as a Tibetan character,” he said, “you’re out of your damn fool mind.”

As for the suggestion that the Ancient One could be rewritten as Chinese, Cargill framed this as a no-win scenario. Someone would end up being offended no matter what the filmmakers did with the Ancient One, he said.

From Cargill’s perspective, casting Tilda Swinton was the least objectionable way to avoid the problem of the Ancient One’s racist history. But his justification fails to explain how Tilda Swinton wound up looking like this:

At a press conference last week, Swinton said, “The script that I was presented with did not feature an Asian man for me to play, so that was never a question when I was being asked to do it.” But reactions to the trailer make it clear that this isn’t just a casting issue.

The criticism of Swinton’s role also covers costuming, production design, and the historical context of mystical mentor roles like the Ancient One. There’s also no avoiding the fact that Doctor Strange takes place in an unspecified Asian country but only includes one Asian character in the supporting cast.

Cargill was right about one thing: this is a no-win scenario. There is no good way for Doctor Strange‘s creators to explain the film’s combination of white actors and Hollywoodized faux-Asian motifs, and things are only going to get more awkward once the publicity tour begins this fall.